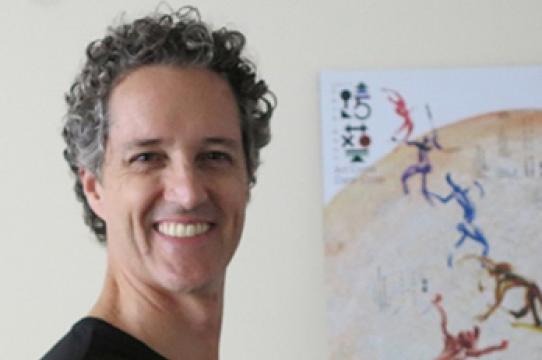 Ted received his early training at the (U)North Carolina School of the Arts and danced professionally with American Ballet Theater, Houston Ballet, and Boston Ballet. His interest in dance cognition and creativity began when studying for a doctorate in human development and psychology at Harvard University. From 2001-2004, he served as Director of Dance Education at New York University. He joined UCSC as an Assistant Professor in 2004. A widely published author, his empirical research explores the relational practices and cognitive processes that support (or undermine) the doing, making, and viewing of dance. His creative projects focus on questions of absence/presence that arise in digital media performance.

Ted has a long record of service on our campus and beyond. He has served as Associate Dean of the Arts, Director of the Arts Research Institute, and Associate Chair of Theater Arts. He has been active on multiple Academic Senate Committees as well as Porter College’s Executive and Academic Standing Committees. Ted’s long-term commitment to development and outreach efforts is evident in the time he has spent giving talks at alumni, emeriti, student, trustee, and UC systemwide events. Ted has supported his scholarly field by serving as director of research for the National Dance Education Organization, president of the California Dance Education Association, and editor of Research in Dance Education.

Ted is the recipient of several awards and honors, including the National Dance Education Organization’s (2016) Outstanding Dance Researcher award. In 2017-18, he received the honorary appointment of Sachs Distinguished Lecturer at Teachers College, Columbia University, the first arts educator in its 90-year history to be so honored.