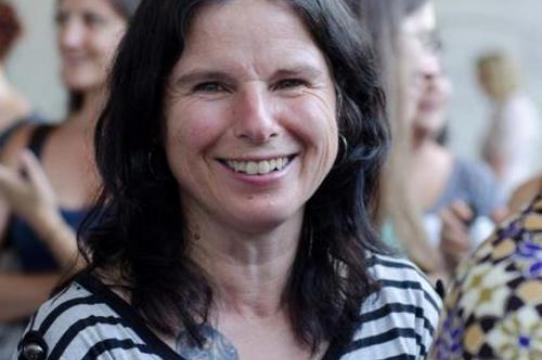 Since 1977, Teresa Locatelli has been on staff at UC Santa Cruz and seen a lot of changes along the way. As the Academic Human Resources Analyst, she takes charge of staff Human Resources issues for the Arts Division, including budgeting, scheduling appointments of lecturers, teaching assistants, and researchers. She originally began her career at the university working in imaging, printing and mail services in a department that now no longer exists, before making her way to the Arts Division in 2000. “Before I came to UC Santa Cruz, I worked at the cement plant in Davenport, handling payroll and other administrative duties, but I was happy to come to UC Santa Cruz…it was a much cleaner place to work!” laughs Teresa.

"Teresa is invaluable! She balances our budget for the staff and faculty, which is not an easy task," says Arts Division Assitant Dean Jan Cloud. "She has a profound understanding of all of the policies and labor contracts, and that requires an incredible amount of detail. She has a 'behind-the-scenes' position, but she's critical to everyone's happiness here. Without her, we wouldn't have the kind of staff her service delivers."

Another very important skill set that Teresa has is knowing how to deal with stray cows. She’s definitely the one to call when any of them start wandering from the ranch on the West side of the campus and onto High Street, which actually happens from time to time. “I push them,” she said. “But you have to be careful because they’ll get on the road, so I have to chase them back up. But sometimes they can actually jump the fence.”

Outside of her job, Teresa’s life is an 180 degree turn from an office setting since she has been raising cows for many years on two ranches she and her husband lease just outside of Santa Cruz, in Bonny Doon and Boulder Creek. “I take care of the Longhorn cattle,” she says. “I take them and show them at the California State Fair every year. I’ve had a champion bull in the state fair, too.”

A typical day at the ranches includes feeding the cows, branding when needed and clearing Scotch Broom. She says that the Longhorns are better than other cattle breeds since they were originally bred to walk on long cattle drives and thus carry less fat and also have calm temperaments. When it’s time to go to the fair, the Longhorns are loaded in the trailers that Teresa and her husband drive. Otherwise, during the time of year when grass is plentiful, they are more or less self-sufficient. “When they have enough grass to eat, there’s not much we need to do with them,” she explains. “They wander around and we just have to breed them, brand them and give them vaccinations. We mainly keep the Longhorn cows, and fewer bulls, for breeding.”

Another passion of Teresa’s is training dogs. “I train them for agility and jumping, and also for shows.” She trains her daughter’s Beagle, her husband’s German Shorthair Pointer plus her own two Black and Tan Coonhounds. Hers was the first Coonhound to get a Barn Hunt title. “They put rats in tubes and then put them in the ground for the dog to find and then indicate,” she says. “It’s a new sport and has just been going on for a couple of years through the Barn Hunt Association.”

Teresa also goes every week to the Monterey Bay Dog Training Club. “It’s really fun and I especially like to do agility and obedience training.” Another sport she enjoys is horseback riding and she has a special horse named Maverick that’s she’s ridden for over 10 years. “I like to go riding on the weekends,” she says. “We’ve also brought him in a trailer to Yellowstone a couple of times. It’s wonderful because there’s nobody out there. Once a buffalo chased us, though!”

She treasures having her office in such beautiful surroundings. “Being at UC Santa Cruz is like camping,” she smiles. “I like walking to meetings and walking across the campus whenever I can. And working for Jan [Coud] is terrific! She’s great to work for.”

As new grad students come through, Teresa likes meeting them and watching their progress. She’s looking forward to all of the exciting adventures coming up not only with the time she spends with her many animals, but also with many interesting happenings at the university.

"Teresa is so personable and has a great sense of humor," adds Cloud. "She's got a whole life outside of here that's so full. I am amazed that any one person can do all that."