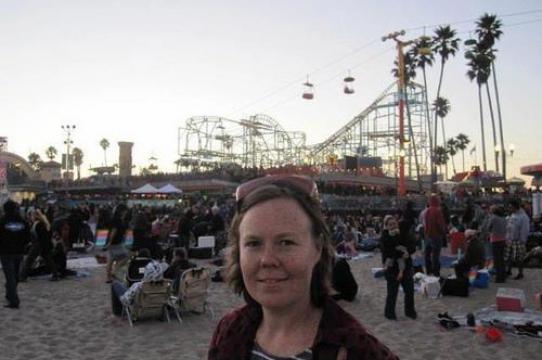 Working on various IT projects, Kristin Erickson, Technical Coordinator for the Digital Arts and New Media (DANM) program, manages a myriad of technical equipment for the department and facilitates intricate exhibition projects for the DANM students. But her friendly and calm demeanor belies a more eccentric side when she was a budding, avant-garde punk musician in San Francisco and Berlin.

“I had a career as a musician for 15 years before I went back to school,” said Kristin. Originally from Tallahassee, Florida, she studied classical music and had played the piano since she was a child. “I always loved music and playing. I didn’t have to be told to practice, I think because playing music was easier than having to talk to people!” Her deep appreciation of classical music turned into wanting to study contemporary music by such greats as John Cage, Pauline Oliveros, Steve Reich, Don Buchla, Morton Subotnick, and Lou Harrison, and she was impressed by what those pioneers and others like them had created on the west coast.

“Some of these musicians had recorded at Mills College, but when I found out it was a women’s college, I decided to go,” said Kristin. And that’s exactly what she did. While at Mills, she met fellow student Bevin Kelley and together they started experimenting with electronic music, eventually forming their own band in 1998, Blectum from Blechdom, complete with band names, Kevin Blechdom (Kristin) and Blevin Blectum (Bevin). “We started by throwing underground parties and inviting other musicians to join us,” said Kristin. “Then we started performing in clubs in San Francisco combining our shows with weird theatrical performance art.”

In 2001, Blectum from Blechdom managed to win an award of distinction in Digital Music at Ars Electronica in Linz, Austria. After that, Kristin and Bevin started touring in Europe. Kristin stayed in Berlin for five more years, touring solo as Kevin Blechdom. “What do I remember about Berlin?” she laughs. “Well, not much! All I remember is that there was a lot of beer. No really, it was great. I played a ton of shows and then got burned out. Music is a very fickle industry.”

At that point, Kristin decided to return to the States and pursue an advanced degree in music. She was accepted by CalArts where she spent three years earning her doctorate in Musical Arts in the Performer-Composer Program, the only doctoral program offered there. “CalArts sealed the deal for me when I found out that Pee Wee Herman had gone there!” laughed Kristin. “It was great to have time to create whatever I wanted and collaborate across disciplines.”

“I started writing computer programs for organizing anti-disciplinary improvisation,” she said. With that in mind, she heard about a program at UC Santa Cruz called the Workshop in Algorithmic Computer Music (WACM) taught by David Cope. “I originally came to UCSC to attend the WACM program before I ever applied for a job here,” said Kristin. “But when I was here for those two weeks, I realized I could be happy living in Santa Cruz. I loved the campus and the energy of the all the different departments, and of course the beach.”

When she heard about the position for technical coordinator at DANM, in July 2013, she knew it was the one for her. She especially enjoys working with the students on their projects. Along with facilitating the technical needs of the program, individual projects, and exhibitions, she oversees DANM facilities in the Digital Arts Research Center, including the Dark Lab, the Light Lab, the Rapid Prototyping Lab and Electronics Lab.

Kristin is working on a digital fractal alien opera called AQULAQUTAQU in collaboration with a few UCSC students and staff which was performed at the San Francisco Electronic Music Festival this year.

During her free time, she gets back to nature by going out in the bay in her 17-foot MacGregor sailboat, observing birds and all of the surrounding the amazing wild life. “It would be hard to find a place that’s more beautiful and open-minded than UC Santa Cruz.”