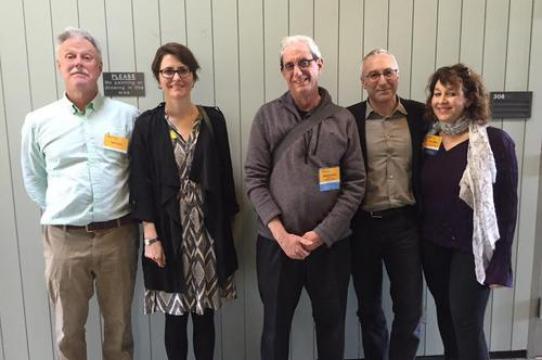 On April 25, 2015, as part of UC Santa Cruz’s Alumni Weekend, renowned arts’ professionals, Jock Reynolds (Stevenson ’69), Jeremy Strick (Cowell ’77), Philip Brookman (Porter ’75), Karen Moss (Porter ’77) and Erin O’Toole (Kresge ’92) were part of a panel hosted by Shelby Graham, Director of the Porter Sesnon Gallery. The esteemed group talked about how their vast educational opportunities and experiences as students at UC Santa Cruz put them on career tracks that lead to all five having key positions at five of America’s most notable art museums.

"The alumni panel delivered personal stories to a standing-room-only crowd,” said Shelby Graham. “They related how their time at UC Santa Cruz gave them hands-on experience and responsibility with curating and working with artists at an early age, and how it has affected their current professional museum careers."

Karen Moss spoke in particular about beloved faculty member Virginia Jansen and, like her fellow alumni, really enjoyed being a part of the panel. “Participating in the curator’s panel was fantastic for several reasons,” said Moss. “First of all, it was great to see the other UC Santa Cruz alums, particularly my colleagues Philip Brooke and Jeremy Strick who I knew from College V (now Porter).

“Also, I enjoyed hearing about everyone’s UC Santa Cruz experiences—we each had strong connections to our professors and they became instrumental in our choices to become art historians, curators and museum directors. It was clear that our mentors–––such as Nan Rosenthal and Moira Roth in art history––not only shaped our intellectual development, but we also maintained connections with them as we pursued our professional careers.

“During the 50th anniversary weekend I was also delighted to hear Virginia Jansen speak at the Sesnon Galley—it was a flashback to her informative and lively lecture style. I took courses from Virginia in medieval architecture and she had an uncanny ability to bring life to arcane and complex subjects. She taught me how to read floor plans, introduced me to the art of colored-coded note cards and her meticulous editing helped me become a better writer. Because of Virginia I wrote my honors thesis on Chartres Cathedral and, when I went to graduate school at UC Berkeley, I studied with her mentor Dr. Jean Bony, who helped to protect the French cathedrals during World War II.”

Jeremy Strick has been the Director of the Nasher Sculpture Center in Dallas, Texas since March 2009. He oversees collections, exhibitions and operations and has presented numerous outstanding exhibitions

Philip Brookman is Consulting Curator in the department of photographs, National Gallery of Art, Washington, D.C. His most recent book is Redlands, a cinematic novel that weaves together an intimate sequence of photographs and a novella set in California, Mexico, and New York City during the 1960s, 1970s, and 1980s.

Karen Moss is an art historian, curator and educator who has worked in museums and academic positions since 1980. She is faculty at the USC Roski School of Fine Arts and Design Curatorial M.A. Program and the Otis College of Art and Design Graduate Public Practice MFA program. Currently, she is also co curator for Talking to Action, a multi-platform exhibition of social practice artists and researchers from seven Latin American countries and Los Angeles.

Erin O’Toole is associate curator of photography at the San Francisco Museum of Modern Art. Most recently she collaborated with Leo Rubinfien and Sarah Greenough on the retrospective exhibition Garry Winogrand (2013), which traveled to the National Gallery of Art, the Metropolitan Museum of Art, and the Jeu de Paume in Paris. She is currently organizing a retrospective of the work of Los Angeles based photographer, Anthony Hernandez, slated for 2016.