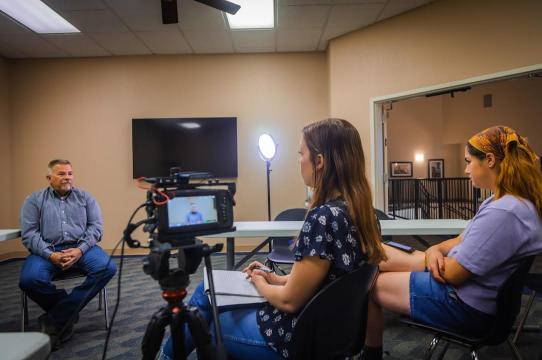 Now underway and in its 12th week, Making an Exoneree pairs UCSC film and digital media majors with undergraduate students at Georgetown University who are working together as investigative journalists, documentarians, and social justice activists to make the case for the innocence of five people behind bars.

The students are reinvestigating the original crimes and convictions and documenting the main issues, challenges, injustices, and stories involved in each case, producing short documentary films, interactive documentaries, and social media campaigns designed to provide humanizing portraits of the incarcerated people’s lives and complicated legal cases.

Says Daniel, whose own artistic work has long focused on the criminal justice system, “Media plays a critical role in work like this. It reveals. It creates public records. It persuades. So many resources are required to overturn a conviction, and a high profile is one of them.”

Daniel is co-teaching the class with Professor of Government and Law at Georgetown Marc Howard and his childhood friend, Adjunct Professor Marty Tankleff, who was himself wrongfully convicted and incarcerated for almost 18 years before being exonerated. Howard and Tankleff developed Georgetown’s Making an Exonoree course in 2018, and its students have already won the release of three men and made significant progress in the legal prospects of several others.

Daniel approached Howard and Tankleff after developing a close bond with Timothy James Young who has been on Death Row at San Quentin State Prison since 2006 and who became familiar to UCSC faculty and staff through the Institute of the Arts and Sciences’ groundbreaking Visualizing Abolition initiative. As part of this ongoing series of exhibitions and programs focused on prison abolition, artist jackie summel established the participatory public sculpture and garden project, Solitary Garden, at UCSC’s Baskin Arts Studios in 2019, collaborating with Young, who directs the garden and its plantings through letter exchanges with students and volunteers that continue to this day.

Along with plant lists and garden designs, Young shares personal reflections on his life in prison and prior in his letters. His relationship with Arts Division staff and students has deepened, and a robust community of friends and supporters has taken root at UCSC, Daniel amongst them. Young became a primary contributor to an interactive documentary, EXPOSED, that Daniel made about COVID-19 in prisons.

Daniel appealed to Howard and Tankleff to take on Young’s case for the 2022 Exoneree course, to which they agreed after reviewing substantial evidence of official misconduct in the case. It had also long been her desire to teach a class like this, and the Georgetown team was enthusiastic about collaboration. The partners will make it annual.

“Working in the world like this is so incredibly valuable for the students, and the course has had a dramatic impact on them,” says Daniel. “They have all told me they plan to continue their work on these campaigns after it’s done.”

Film major Allison Dean, who is part of the group assigned to Young’s case, is all in. “I’m definitely sticking with it after the course is over,” she says. “The first time I got a letter back from Tim, saw his handwriting and read his questions for me, it was just so moving. This man trusts me to do this really important work, so I’m going to keep making sure his story gets heard.”

Fellow film major Sullivan Gaudreault concurs. “This was an opportunity to work on something that could change someone’s life. It’s so much more meaningful than making something for a grade,” he says. “My short term goal is to get Tim’s voice out into the world to as many people as we can reach, but long term, I’m really looking forward to the day that Tim can come see his garden here at UCSC.”

For more information about the Free Timothy James Young campaign, visit the website or follow @freetimyoung on your preferred social media platform.

Students will present their work at a public event this spring hosted by the Prisons and Justice Initiative at Georgetown and the Institute of the Arts and Sciences at UCSC.

If you'd like to help make sure this class or others like it continue, please contact Sarah Schuster Kudela, director of development for the Arts Division.