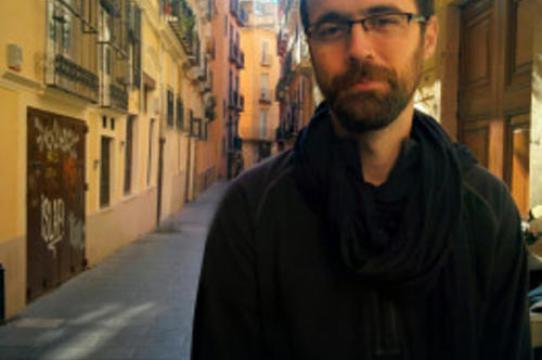 Dividing his time between such divergent places as Barcelona, Cairo and Oakland, transdisciplinary artist-theorist Ian Alan Paul is currently a PhD candidate in UC Santa Cruz’s Film and Digital Media program, and has recently received acclaim for his virtual exhibit, The Guantanamo Bay Museum of Art and History. He became interested in the project, because of what he saw as an ideological disjuncture that the Guantanamo Bay detention camp inhabited.

“On the one hand, the facility is vastly unpopular across the political spectrum,” he says, “making it appear as if it would be trivial to mobilize for and eventually enact its closure. On the other hand, the facility inhabits a black box outside of the law and public scrutiny, making it seem quite impossible to close. The entanglement of the inevitable and the impossible was what initially drove me.”

Paul originally became interested in arts and activism during the 2003 invasion and occupation of Iraq when he started photographing the massive protests throughout the Bay Area that were taking place at the time. He also grew up in the Bay Area, earned his BA in Art at UC Santa Cruz, and both his MA in History and Theory of Contemporary Art and MFA in Art at the San Francisco Art Institute.

He has particularly enjoyed his time at UC Santa Cruz and been especially inspired by Sharon Daniel(Professor, Film and Digital Media) and Irene Gustafson (Associate Professor, Film and Digital Media). “I’ve also been fortunate to work with Dean Mathiowetz [Associate Professor, Politics] and Karen Barad[Professor of Feminist Studies] on my research which has been a great help and allowed my work to take on a more transdisciplinary character.”

“Whenever I encounter Ian’s work, I am always impressed and inspired by the ways in which it holds a complex set of theoretical, political and aesthetic concerns,” said Gustafson. “His work articulates a fierce critique of the current political and cultural moment, without ever resorting to nihilism or pettiness. Just to the contrary. The Guantanamo Bay Museum Project, like his other work, registers a future which is available in the potential of the present.”

Mathiowetz is also impressed with Paul’s work and noted: "Ian has a remarkable ability to hold theoretical frames and political moments together, in ways that are insightful and illuminating of the matter at hand, and also invite his audience to enter into and share in the process of seeing otherwise. I always learn a lot from his work."

Along with working on his various projects, Paul travels frequently between Oakland and Barcelona. “I have family in both cities, so I end up going back and forth often,” he says. “Over the past few years, I’ve also been spending considerable time in Cairo teaching in a university there as well as doing fieldwork for my dissertation.”

For the Guantanamo Bay Museum, begun in 2012, Paul did a large amount of research, collecting materials and reading about the facility and its history. He luckily found a profusion of data due to the continued interest in the future fate of the detention center from lawyers, historians, academics, activists and artists from around the world. But there is still a significant amount of information that is suppressed. “Much of Guantanamo, and what happens there, remains shrouded in mystery,” says Paul. “And ongoing research practices, including the use of FOIAs [Freedom of Information Act] and working with prisoners there, remain critically important strategies for documenting the prison.”

Strictly a virtual museum that has a life solely on the Internet via a very comprehensive and well-designed website, a note from the “executive director” on the museum’s homepage states: The Guantanamo Bay Museum of Art and History, located at the former site of the Guantanamo Bay Detention Camp in Cuba, is an institution dedicated to remembering the U.S. prison which was active between 2002 and 2012 before it was permanently decommissioned and closed.

The website’s design and language are so engaging that visitors might do a double take and think that Guantanamo Bay really was closed down and somehow they just missed this vital information in the news. For example, there are images of President Obama “signing the order to officially close” the prison, “visitors celebrating during the opening gala of the museum”, and an authentic looking timeline of the prison and how the museum evolved.

“We certainly didn't want it to operate as a hoax, or at least not only in that way,” says Paul. “Of course it's interesting to see what people believe, or what we all are capable of believing. It's a way of mapping our political imaginations and we wanted to point to the inherent fictionality of the present. The aim of critical fictions/simulations like the museum are to make clear the ways in which our political and social realities are always produced, always something we choose (or choose not) to collectively believe in. And more importantly, that these beliefs have tangible consequences.”

So far, the museum has been installed at the University of Pennsylvania, Brown University, the Museum of Modern Art in Warsaw, UC Berkeley, and UC San Diego. It can currently be viewed at the Yerba Buena Center for the Arts (YBCA) in San Francisco as part of the Take This Hammer: Art + Media Activism from the Bay Area exhibition through August 14, 2016.

“I was incredibly happy that the museum was able to be installed alongside such generative and thoughtful work from artists and activists in YBCA's exhibition,” Paul says. It's rare to be able to spend time with, engage with and celebrate with the broader culture of resistance and creativity that has had such a long lasting home in the Bay Area, and I hope that the exhibition serves as a platform for the creation of new projects and collaborations.”

Paul notes that there has been a large diversity of reactions to the museum, which he thinks is a virtue. “One of the things I hope that the project does is defamilliarize and disrupt the way that we think about the prison, to make it strange and understand it in its contingency: as something that exists but didn't have to exist, and could no longer exist if we wanted it enough,” he says. “This kind of process, the process of defamliarization, is one that is inherently unpredictable. You can't anticipate where people are coming from, what histories will inform their encounter, nor where their imaginations will carry them. In a way we're asking questions we don't have answers for, and this is the enactment of a particular politics. We want to create the conditions for things, rather than enact specific things in themselves.”

For now, Paul hopes to keep the museum open indefinitely and to continue to collaborate with institutions in the United States and abroad. He’s presently finishing his practice-based dissertation on post-revolution/post-coup Cairo that uses a variety of documentary strategies to look at the tactics that artists, activists, and others are using to survive under military rule.

He finds that being a part of UC Santa Cruz continues to deepen his artistic process. “I chose to attend UCSC because of the vibrant intellectual and creative traditions that have a home there,” he says. “I think it’s a campus that has an incredible amount of critical rigor that also supports more experimental approaches that wouldn’t be welcome at other, more conservative institutions.”