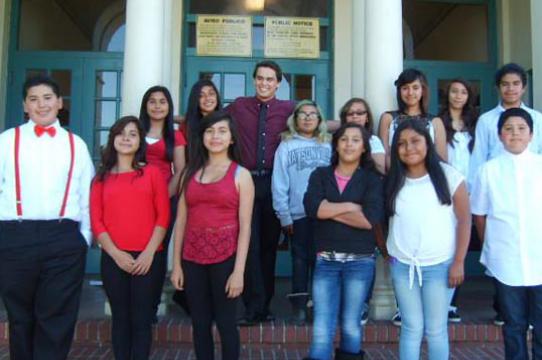 Music major Shane Liliedahl had himself one busy senior year. When he wasn't attending classes at UCSC, leading an a capella singing group, organizing a music and art festival, or polishing his Italian for a leading role in the opera program's Cosi fan tutte, Liliedahl taught music to two groups of schoolchildren in Watsonville. Liliedahl worked after school at Ohlone Elementary School, teaching singing classes to elementary school children through the ArtsBridge program. And he also accepted what he admits was a "challenge" teaching choir and keyboarding twice a week after school at E.A. Hall Middle School.  Thanks to a grant from an E.A. Hall alumna, Liliedahl became one of the outreach instructors in the Arts Internship Program.

"The experience was really rewarding," the UCSC intern admits of his time encouraging Watsonville school children to learn and love music. "I ended up doing a concert with them, which went so well—it was a huge plus in my university career. A huge plus."

A Topanga Canyon native, Liliedahl was on one of those scouting visits that so many high school students make to our campus when it became obvious he was destined to spend his college years here. "I came to UCSC on a college search, and the campus completely captured me," he grins. Liliedahl had always been involved in music, and credits his high school choir teacher with inspiring him to pursue music. "I guess I felt that I would eventually be headed toward teaching music." Typically for such an engaged student, his UCSC career "flew by" and before Liliedahl knew it he was ready for graduation, after which he's looking forward to an extended motorcycle trip to Alaska with his dad. "Then I'll be exploring what I want to do next."

Thumbs Up for the Internship Program

The internship came about when a fellow Music major saw an email announcement and suggested that Liliedahl apply. Once accepted into the Arts Internship Program, Liliedahl began his after-school music classes in January. Meanwhile, Liliedahl's tenor voice and acting skills scored him a leading role in the Spring 2013 opera production, and he started learning Italian, memorizing the music and attending rehearsals a full year before the performances. All of these musical responsibilities kept the Music major "more busy than I would have been with only coursework, but it was worth it."

"It was great to acquire real world experience, teaching music to a young audience," Liliedahl believes. "Even if it's outside your field, it's good to get work experience, to explore your passions. I like making something happen," he adds. "I like being busy." And that's an understatement.