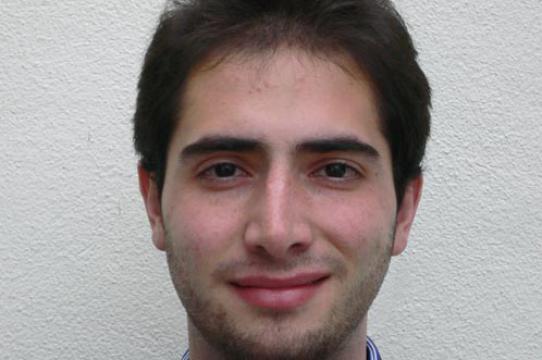 Feasting on films since childhood, Film & Digital Media senior Spencer Koobatian quickly realized that his central cinematic passion was film editing.  As a student at the Idyllwild Arts Academy's Moving Pictures Department, Koobatian was soon immersed in every aspect of filmmaking, from gripping to gaffing, as well as cinematography, screenwriting, directing, and of course, editing. While still at the private arts boarding school, he produced an award-winning short documentary, worked on numerous films and during his senior year edited Nicholas Kane's Film BLACKOUT. For this project Koobatian researched editing styles of such cinema giants as D.W. Griffith and Sergei Eisenstein, incorporating their editing techniques into his own work.

While enrolled in UCSC's F&DM department, Koobatian used his first summer vacation on an internship with Seattle's Digital Kitchen production group, where he worked on opening credits for the popular television series House MD, and television bumpers for Discovery Channel's Stormchaser. The following summer, he helped craft a TV pilot and learned the finer points of Adobe After Effects and Final Cut Pro editing programs. This hands-on work ethic has not only kept Koobatian busy all year 'round, but it has gained him a long list of film work credits—even before his graduation from UCSC this coming June.

Currently working as an editor on a documentary by Anthropology professor Shelly Errington, Koobatian has gained the attention of film theorists as well. His senior thesis entitled The Temporal Musical, which analyzes time manipulations in a series of film musicals, was recently accepted for presentation at the first Society of Cinema and Media Studies Undergraduate Conference. Koobatian will present his paper this month at Notre Dame University “This is quite an honor," says F&DM Professor Shelley Stamp.  "SCMS is the premiere scholarly organization in our field and this is their first undergraduate conference."

Capping off an already robust career in film production and scholarship, Koobatian has just been accepted to the prestigious American Film Institute (AFI), whose alumni include David Lynch, Terence Malick and Francis Ford Coppola.

"I wanted to be a film editor from the start," he admits. "I like constructing with materials others have given me—it's the most powerful position." Editing the sequences of images in a film can inflect and construct its overall impact, and can significantly influence the meaning of the cinematic experience itself. "I was accepted into the AFI's editing program," Koobatian says with obvious excitement. "The editing program only accepts fourteen people each year. They want people to have production experience, and that's why I was pro-active in getting industry internships and in working hard in the Film & Digital Media department."

“The most exciting part of what I've been doing here at UCSC is learning the different theories, and based upon editing styles how you can deconstruct, and then reconstruct the impact of a film in others ways. "You're essentially influencing the audiences' perceptions."  In his upcoming paper—originally his senior thesis—Koobatian analyzes Moulin Rouge, Babel, and Butiful of which Koobatian notes, "the editor of that film is Stephan Mirrione, who is a UCSC alumnus."

Is it more difficult editing a digital film than it is a more traditional 35 mm film? Koobatian once asked a mentor that question, and was told that editing actual film forces you to think more about the overall construction. "When you're editing, " says Koobatian, "it's always easier to construct if you think first. Foresight is important, especially with documentaries. To arrange the meaning of the whole finished film you have to know where you're going," he grins.  And the future? Will Koobatian end up choosing film editing, the production end of his interests? Or the theory side of his work?  “I've put so much time into creating, and I'm happiest doing it," he admits. “I'll always be able to write, but not always able to make films.”

Presenting the paper at the Cinema Society Conference is an honor for Spencer Koobatian. “I couldn't have done it without the support of my faculty and school,”he says. “It's something new, and it's exciting—giving voice to undergraduate work. I think it's important.”