UC Santa Cruz’s Foundry Is One of Kind 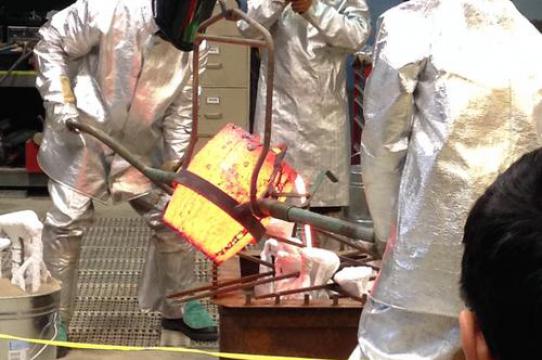 As the only active foundry left in the entire University of California system, the foundry at UC Santa Cruz is especially significant, offering students a rare sculptural experience not usually found in university art programs. Built in the early 1970s, only a few years after UC Santa Cruz opened, Professor Doyle Foreman originated the foundry program and set up the first sculpture studios on campus, which were metalworking and figure modeling.

The foundry, which was originally located in the old Blacksmith Barn, was upgraded in 1975 to a state-of-the-art facility, complete with an overhead crane, two furnaces and a burn-out kiln. The location was moved to where it still stands today, nestled in its own dedicated building between the outdoor Stanley-Sinsheimer Festival Glen stage  and the Theater Arts department.

Sculpture instructor Sean Monaghan who now runs the UC Santa Cruz foundry program, was himself a student of Foreman’s and remembers those early years well. “What really hooked me when I was a student at UC Santa Cruz was working in the foundry. My roommate told me to check it out, so I came to the class and Doyle was nice enough to let me hang out and play with the wax and cast something. That eventually got me interested in metal work.” Not only does Monaghan continue to teach at UC Santa Cruz, but he is also a renowned and very successful metal sculptor with his own studio and foundry, Bronze Works, in Santa Cruz.

The foundry actually played a pivotal role in the direction Monaghan’s life took since he didn’t start out wanting to be an artist. “I had no plans to be an art major,” he said. “I wanted to do engineering and architecture, and I took some math and science classes towards that but they didn’t offer those majors at UC Santa Cruz at the time, but I really wanted to go to school there and then got hooked on the foundry.”

The most exciting events at the foundry are undoubtedly the bronze pours which take place about twice a year. The pour is a fascinating process that brings students, faculty and staff from all over the campus to witness, as art students see their works of art transformed from molds to finished bronze pieces. The sculptures are initially generated in wax forms then dipped in a ceramic shell that is fired, melting the wax but leaving the ceramic in tact. The shells have to be heated to an extremely hot 1,000 degrees, then put in the kiln and fired at 1,700 degrees, then re-fired between 800-1,000 degrees, and then buried in sand to hold the bronze as it cools down. From there, the ceramic is broken away and the bronze piece emerges, waiting to be finished – welded, detailed, and mounted on a base.

Watching as the hot, glowing bright orange bronze is poured from the crucible onto the sculptures is quite a show. Everyone who actively participates in the pour has to be dressed head to toe in heavy heat/fire-resistant Kevlar gear. The crucible is transferred from the blast furnace to the pieces by way of a huge hoist that lifts and lowers onto the sculptures, while it’s carefully guided by the participants.

“Most of the students come in not knowing the process,” says Monaghan. “We show them how to work with wax, how to make simple molds, and how to make more complex rubber molds.” The students typically sculpt in clay then make either a rubber or plastic mold, and then cast wax into the mold.

“It’s a really fun class and the students are very enthusiastic,” says Monaghan. I think they enjoy having the foundry here because it’s not like any other class. It’s a lot of hard work but you learn a lot, and many students like working with their hands and using tools. We’ve also had a lot of repeating students, which is wonderful, and they can also train to be monitors and keep the studio open extra hours so everyone has more time to use the equipment.”

Outside of teaching, Monaghan has just completed a stunning public art bronze sculpture for city of Hollister of beloved town resident, Eric Tognazzini who passed away in 2011 at the age of 65. The life-sized statue depicts Tognazzini, who overcame challenges with cerebral palsy, smiling broadly on his three-wheeled bike. The piece was recently dedicated with much appreciation from the Hollister community.

Monaghan is also looking forward to working with his students on their current projects. “A lot can be gained from the simple practice of doing the work, and more ideas emerge as students solve problems with their work. The process definitely informs whatever other media students choose to work in.”

Foundry courses are offered throughout the year and at the end of each quarter, students come away with their own completed bronze piece that’s presented at the Open Studio display of student work.