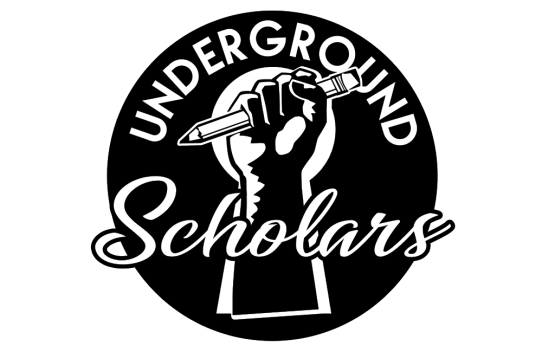 Wednesday, May 12, 2021 - 5:00pm to 6:30pm
online event
Presented by:
Institute of the Arts and Sciences
Mary Porter Sesnon Art Gallery

The Underground Scholars Initiative's mission is to build community, awareness, and support among formerly incarcerated and system-impacted students into higher education and to proliferate the concept of a "Prison-to-University Pipeline." Founded in 2013 at UC Berkeley, the Underground Scholars Initiative has spread across the state with chapters at community colleges and UC campuses at UCLA, UC Irvine, UC Riverside, UC Santa Barbara, UC San Diego, UC Davis, UC Merced, and UC Santa Cruz.

This event is supported by the 2021 University of California National Center for Free Speech and Civic Engagement's VOICE Grant, with the theme of "Breaking Barriers."

Missy “MJ” Hart is an artist, abolitionist, and gang-member-turned-activist after surviving the horrors of the criminal injustice system. MJ is on the Juvenile Justice and Delinquency Prevention Commission in San Mateo County and is a founding board member with Pride In Truth. MJ is the community outreach coordinator with the Underground Scholars Program at UCSC and recently earned their B.A. in psychology with a minor in history of consciousness. MJ is also a graduate student at Claremont Graduate University in the Positive Developmental Psychology Program and a youth organizer with Coleman Advocates. MJ strives to put the weaponization of their mind into action, organizing with grassroots movements in their communities and beyond, pushing a hard line for justice and transformational healing.

Alberto Lule became an artist while serving a 13-year prison sentence. Art made the prison walls disappear, allowing Alberto to overcome both a physical and mental prison. Using mixed media installation, Alberto critiques mass incarceration and particularly the California prison system. Alberto connects the similarities between institutions, from institutions of higher learning to correctional institutions, to expose and learn from a scientific and sociological perspectives, but even more thoroughly through art and activism.

Ryan Flaco Rising has experienced drug addiction, gang-banging, physical and mental abuse, incarceration as a juvenile, seven years in prison, and brutal prison riots which almost cost their life. While in prison, education became an outlet to address past trauma, and writing helped Ryan grow a passion for learning. Through the Underground Scholars Initiative, Ryan developed leadership skills, and is engaged in finding solutions to end mass incarceration through collective first-hand experiences, while thriving at UC Santa Barbara.

Born and raised in Boyle Heights Aliso Village Projects, Rodrigo Vazquez started organizing to end gang violence and build Black and Brown unity. Vazquez assisted in the California campaign to reform the three strikes policy and to change confinement conditions for youth inside the YA. At UC Berkeley, Vazquez assisted in developing the Underground Scholars, and created statewide programs with funding for formerly incarcerated students. Vazquez is now a graduate student at UCLA's Social Work Program.

The Sesnon Speak Up series aims to provide a safe space for students and the UC Santa Cruz community to engage with critical ideas generated from the gallery's exhibitions.