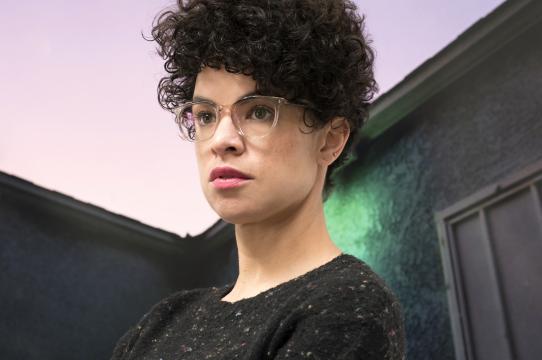 Whether in the form of drawing, photography or large-scale installation, Sadie Barnette’s acclaimed artworks relish in the transcendence of the mundane to the imaginative. Recent works engage as primary source material the 500-page FBI surveillance file kept on her father, Rodney Barnette, who founded the Compton, California, chapter of the Black Panther Party in 1968. In the artist’s hands these repressive documents are reclaimed — splashed with pink spray paint and adorned with crystals — in an intergenerational assertion of the power of the personal as political. Barnette’s work deals in the currency of the real, in earthly acts of celebration and resistance, but is also tethered to the other-worldly, a speculative fiction, a galactic escape. As the artist says, “This is abstraction in service of everyday magic and survival in America.”​

This event is FREE and open to the public. Parking is available in the Arts Parking Lot ($5, pay at the onsite pay station).​

Sadie Barnette is from Oakland, California. She earned a BFA from CalArts and an MFA from the University of California, San Diego. Her work has been exhibited throughout the United States and internationally and is in the permanent collections of museums such as LACMA, Berkeley Art Museum, the California African American Museum, the Cornell Fine Arts Musuem, the Pérez Art Museum in Miami, Studio Museum in Harlem (where she was also Artist-in-Residence), Brooklyn Museum and the Guggenheim. She is the recipient of Art Matters and Artadia awards and has been featured in publications such as The New York Times, The Los Angeles Times, Artforum, and Vogue. She lives in Oakland, CA and is represented by Charlie James Gallery in Los Angeles.