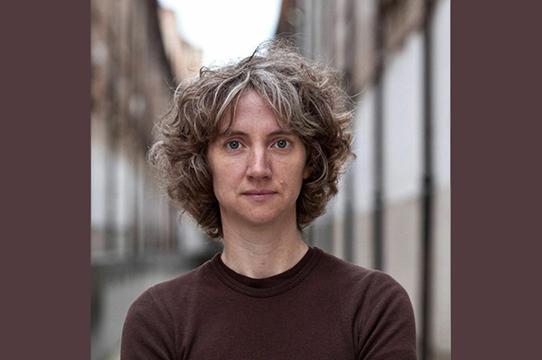 Sharon Hayes engages multiple mediums—video, performance, and installation—in ongoing investigation into specific intersections between history, politics and speech. Hayes’s work is concerned with developing new representational strategies that interrogate the present political moment as a moment that reaches simultaneously backward and forward—a moment that is never wholly its own but rather one that is full of multiple past moments and the speculations of multiple futures. From this ground, Hayes addresses political events or movements from the 1960s through the 1990s. Her focus on the sphere of the near-past is influenced by the potent imbrication of private and public urgencies that she experienced in her foundational encounters with feminism and AIDS activism.

*    *    *    *    *
About the Artists
Sharon Hayes’s work has been shown at the Venice Biennale (2013), the Museum of Modern Art, the Guggenheim Museum, Tanya Leighton Gallery, the Whitney Museum of American Art, and the Museo Nacional Centro de Arte Reina Sofia, among other venues. Hayes is the recipient of a Pew Fellowship (2016), a Guggenheim Fellowship (2014), the Alpert Award in Visual Arts (2013), an Anonymous Was a Woman Award (2013), and Louis Comfort Tiffany Foundation Fellowship (2007). Hayes received a B.A. from Bowdoin College, an M.F.A. from UCLA, and attended the Whitney Independent Study Program. Hayes currently teaches in the University of Pennsylvania’s Department of Fine Arts.

Jennifer González, professor in the History of Art and Visual Cultures Department at UC Santa Cruz, writes about contemporary art with an emphasis on installation, digital, and activist art. She is interested in understanding the strategic use of space—exhibition space, public space, virtual space—by contemporary artists and by cultural institutions such as museums. More specifically, she has focused on the representation of the human body and its relation to discourses of race and gender. González also served as chief editor for the co-edited volume Chicana and Chicano Art: A Critical Anthology, with Ondine Chavoya, Chon Noriega and Tere Romo (Duke University Press 2019). She has published articles in numerous scholarly and art publications such as Journal of Visual Culture, Frieze, Bomb, Diacritics, Archives of American Art Journal, Camera Obscura, Open Space, and Art Journal.