Sightings and Landings: Captain Cook and Coastal Contestation in Aotearoa and Hawaiʻi 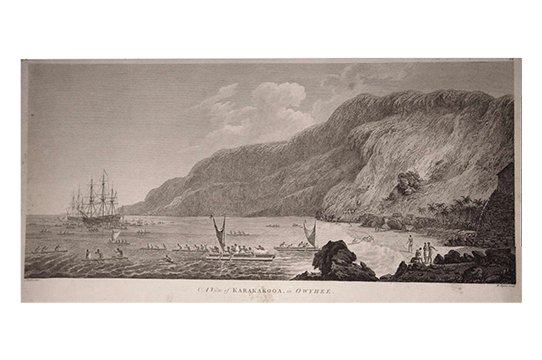 ---
Assistant Professor Kailani Polzak of the History of Art & Visual Culture Department at UC Santa Cruz presents a talk, "Sightings and Landings: Captain Cook and Coastal Contestation in Aotearoa and Hawaiʻi," as part of the Visual and Media Cultures Colloquia (VMCC) series

ADMISSION
[This event has been cancelled and registrants have been notified via Zoom.]

ABOUT THE LECTURE
The charts and pictures produced after the voyages led by Captain Cook rendered what is now called the Pacific Ocean more comprehensible to European viewers and often did so by differentiating places and peoples. During the production of these graphic expressions, the horizon served as a visual constant and coasts as indices of progress. However, the intervening space between those epistemological markers was often where formative interactions took place and several limits of Enlightenment-era rationality were recorded. This talk will consider points of convergence and divergence in British, Māori, and Kanaka 'Ōiwi understandings of coastal spaces and how art historians might approach the histories and ways of knowing inscribed in their representations.

ABOUT THE SPEAKER
Assistant Professor of the History of Art & Visual Cultures Department, Kailani Polzak’s research focuses on European visual culture in the eighteenth and nineteenth centuries with particular attention to histories of science, aesthetic philosophy, race, colonialism, and intercultural contact in Oceania. Learn more about Professor Polzak here.

ABOUT THE SERIES
The annual Visual and Media Cultures Colloquia (VMCC) at UC Santa Cruz are a collaboration between the graduate programs in Film and Digital Media Department and Visual Studies in the History of Art and Visual Culture Department. The series brings an array of cutting-edge scholars to speak on a broad spectrum of subjects.