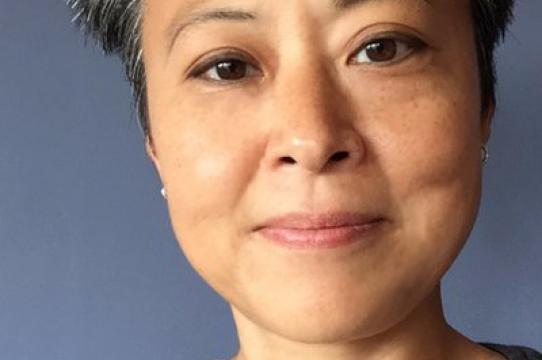 The UC Santa Cruz Arts Division is very pleased to announce that Elaine Gan has been awarded one of five 2019 Distinguished Graduate Student Alumni Awards. Gan holds both an M.F.A. in digital arts and new media (2011) and a Ph.D. in film and digital media (2016) from UC Santa Cruz. She is currently an assistant professor and faculty fellow at the Center for Experimental Humanities and Social Engagement at New York University, Graduate School of Arts and Science.

The Distinguished Graduate Student Alumni Award has been awarded since 2017 during UC Santa Cruz’s annual Alumni Weekend. Each academic division selects its own honoree, a graduate student alumnus from any program, receiving either a master’s or doctoral degree from UC Santa Cruz, who has distinguished themselves during their post-graduate career.

“Elaine’s Ph.D. work was both a logical outgrowth of the M.F.A. work but also astounding,” said Professor Warren Sack, the chair of the Film and Digital Media Department. “While her M.F.A. work successfully demonstrated how to produce an artistic work equal to Fredric Jameson’sdreams of a cognitive map, her Ph.D. work showed how to write about the multiple scales, institutions, and species these maps comprise.” 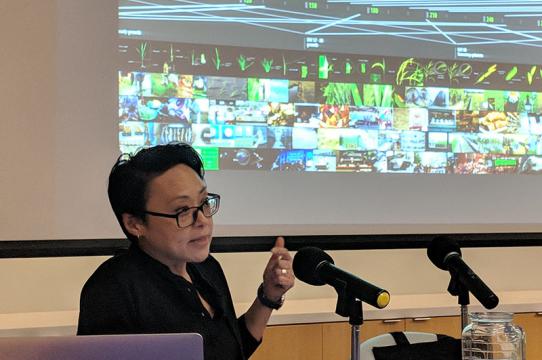 Since receiving her Ph.D., Dr. Gan has been the art director and a postdoctoral scholar for Aarhus University (Denmark) Research on the Anthropocene (AURA) (2016-2017), the Mellon Postdoctoral Scholar in Digital Humanities at the University of Southern California, and visiting researcher at the Laboratory for Environmental Narrative Strategies at UCLA (2017-2018). She is co-editor of the anthology Arts of Living on a Damaged Planet: Ghosts and Monsters of the Anthropocene (University of Minnesota Press, 2017) and co-curator of the art and science exhibition DUMP! Multispecies Making and Unmaking (Kunsthal Aarhus, 2015).

Dr. Gan’s scholarly work has been published in journals that include Environmental Philosophy, Journal of Ethnobiology, New Formations, and Third Text. She has presented at Goldsmiths University of London, University of Chicago, UC San Diego, KTH Stockholm, Society for Artistic Research, and HKW Berlin, among others.

Her artistic work has been exhibited in international art venues and has been awarded fellowships by the New York Foundation for the Arts, AURA, the Jerome Foundation, and the Lower Manhattan Cultural Council (LMCC).

“In addition to doing the primary archival and ethnographic work, the development of Elaine’s writing has been a spectacular achievement that integrates insights and techniques from the best of science studies, media studies, cultural studies, and cultural anthropology,” added Professor Sack.

“With her increasingly important international profile in art exhibition, curation, and publication, Elaine represents the best of UC Santa Cruz to the world,” said Dr. Sack.