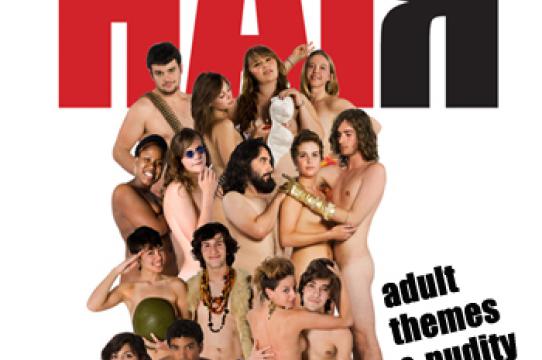 Buy one ticket at full price ($14), get a second ticket FREE:

HAIR was in development for a number of years, beginning in 1964. It debuted off-Broadway in 1967 and opened on Broadway in 1968.

What was going on in America during that period...?

• HAIR responds directly to the Viet Nam War and the movement to end the war. In 1966, anti-war protests were held in New York, Washington, Chicago, Philadelphia, Boston and San Francisco. In April 1967, Richard M. Nixon visited Saigon and stated that anti-war protests back in the U.S. are "prolonging the war." On January 31, 1968, the Viet Cong launched what became known as the Tet Offensive. Although it was ultimately a military defeat for the communists, it had a profound effect on the U.S. government and shocked the American public. In 1968, an average of over 1000 U.S. troops were killed each month. (source: The History Place)

• Racial integration and civil rights were major issues in the late 60s. The landmark Civil Rights Act of 1964 outlawed unequal application of voter registration requirements and racial segregation in schools, at the workplace, and in public facilities. In April 1968, President Lyndon Johnson signed the Civil Rights Act of 1968, commonly known as the Fair Housing Act.

• The 1960s were the era of the sexual revolution... free love... experimentation. In 1965, by a vote of 7-2 in Griswold v. Connecticut, the U.S. Supreme Court struck down the Connecticut law prohibiting the use of birth control as a violation of a couple's right to privacy. In 1968 David Niven and Deborah Kerr starred in the Hollywood film comedy "Prudence and the Pill."

2. I Heard It Through The Grapevine - Marvin Gaye

6. Sittin' On The Dock Of The Bay - Otis Redding

7. People Got To Be Free - The Rascals

8. This Guy's In Love With You - Herb Alpert

9. Judy In Disguise (With Glasses) - John Fred & His Playboy Band

17. Those Were The Days - Mary Hopkin

19. The Good, The Bad And The Ugly - Hugo Montenegro

Book and Lyrics by Gerome Ragni and James Rado

Produced for the Broadway Stage by Michael Butler

Buy one ticket at full price ($14), get a second ticket FREE:

(current UCSC undergrads with valid ID get 1 ticket for free)

UCSC staff, faculty, and Alumni Assoc. members w/ ID may purchase up to 2 tickets at the student price

This production is made possible, in part, by gifts to the Arts Division at UCSC.

Give to the Arts at http://arts.ucsc.edu/giving.

HAIR is produced by arrangement with, and the music and dialogue material furnished by TAMS-WITMARK MUSIC LIBRARY, INC., 560 Lexington Avenue, New York, NY 10022.