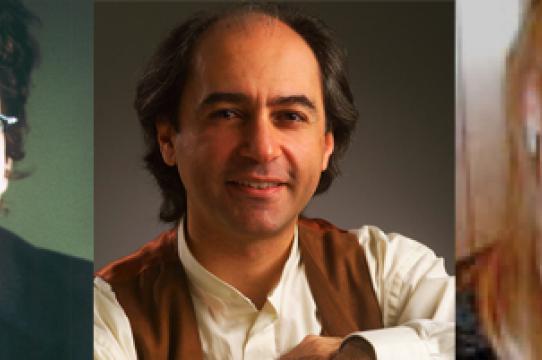 Music from Istanbul and the Ottoman Court

Neva Özgen, a master of kemençe (Turkish bowed instrument with gut strings) and one of the most respected improvisers in Turkish classical music, currently teaches at the Istanbul University Turkish Music Conservatory. She will be visiting UCSC as part of the Porter College Distinguished Visiting Artist & Lecturer Program.

Notes About the Program

The Özgen Trio presents a repertoire from the classical and folk musics of Turkey. First, it travels back in time to the world of Prince Dimitrie Cantemir (known as Kantemiroglu in Turkey) – a Moldavian prince, scholar, musician, and royal guest of the Ottoman Sultan. He was one of the influential composers in the 17th-century Ottoman court. Three pesrevs by Cantemir are combined with several folk songs from his native Moldavia and Turkey, as well as taksims, which are improvised preludes in a traditional Turkish performance style. After Anatolian Fantasy by Mesut Özgen, an original composition inspired by Anatolian folk music, the first half ends with Rumeli Türküsü, which is a term referring to the light urban style Turkish folk music from Thrace. Songs of this genre are composed within the scales and melodic progression of the classical makam system. Since the 17th century, some of the most distinguished composers of Ottoman classical tradition have written light tunes in the form of türkü, forming a bridge between the élite and popular taste. Özgen’s composition incorporates two original Rumeli Türküsü into this piece.

The second half of the program begins with the world premiere of News From Afar by UCSC composer David Evan Jones, as the first piece in a projected series of pieces using processed news podcasts (recordings) in combination with live instruments. As David explains "I have always wanted to do something musical with the bad news I hear on the radio everyday; this is but one approach. The podcasts (in multiple languages) are slowed down to various extents. Pitches are imposed upon each recording in such a way that the intonation contour of the original speaker is retained but the spoken pitches are stablized around the selected scale -- more like speech-song than normal speech. News From Afar plays with the idea of tuning a radio to diverse radio stations to hear the news in many languages: altered recordings in Malaysian, Russian, and English are featured here. Finally, I am grateful and appreciative for the courage and musicianship of the performers who agreed sight unseen to enter this strange new world with me." Next comes Vira Sevda by Mesut Özgen, based on a song by Mesut’s father Bilge Özgen, which was composed in  the style of classical Turkish music with lyrics written by Yalçın Benlican. "Vira" means continuous and "sevda" refers to passionate love. The music is in makam buselik, which is similar to natural minor, and two types of usûl, evfer and düyek, are used as rhythmic patterns. Hüseyni Saz Semaisi by Yalçın Tura, renowned Turkish composer who is also a Cantemir specialist and was the head of Istanbul University Turkish Music Conservatory between 1997-2001. Saz semaisi is a typical instrumental form in classical Turkish music, this one is in makam (mode) hüseyni. Mesut Özgen’s settings of Three Folk Songs from Istanbul and Azerbaijan conclude this musical journey.