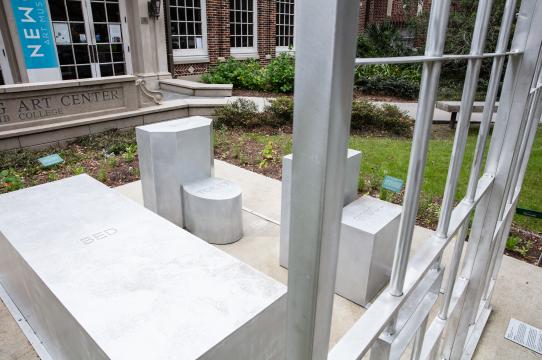 Solitary Garden is a participatory public sculpture and garden project by jackie sumell. Located overlooking the Monterey Bay near the Baskin Art Studios at UC Santa Cruz, the sculpture takes the size and shape of a solitary confinement cell. The stark 6x9 sculpture is surrounded by a garden tended and planted as a collaboration between Tim Young, a prisoner currently incarcerated at San Quentin, and students and volunteers at UC Santa Cruz. As plants grow and climb the bars of the prison cell, the project aims to allow the community to imagine a landscape without prisons.

Solitary Garden is part of Barring Freedom, multi-faceted, 18-month project which includes exhibitions of art, events and workshops, and a multi-day symposium at UC Santa Cruz, “Visualizing Prison Abolition,” October 15-17, 2020. Barring Freedom brings together artists, activists, and scholars to imagine alternatives to our fundamentally flawed criminal justice system and to galvanize a broader public to address the broken promise of freedom and justice for all in the United States.

jackie sumell is a multidisciplinary artist inspired by the lives of everyday people. Her work speaks to both traditional artist communities and those historically marginalized by structural racism. sumell’s work has been exhibited extensively throughout the US and Europe. Her residencies and awards include 2017 Blade of Grass-David Rockefeller Fund Joint Fellow in Criminal Justice, 2016 Robert Rauschenberg Artist-As-Activist Fellowship, 2015 Eyebeam Project Fellowship, and 2008 Akademie Solitude Fellowship. An ardent public speaker and prison abolitionist, sumell has lectured in Colleges and Universities around the US including UC Berkeley (BAMPFA), RISD, ZKM Karlsruhe, and as keynote for the National Prisoner Advocacy Conference 2014. sumell began the Solitary Gardens project to honor the legacy of political prisoner Herman Wallace, who was held in solitary confinement for over 40 years and with whom jackie corresponded and collaborated for 12 years. Her collaborative work with Herman Wallace, The House That Herman Built, is the subject of the Emmy Award Winning documentary Herman’s House, screened to a national audience on PBS in 2013. sumell’s work explores the intersection of creative practices, mindfulness studies, social sculpture, and the principles of The Black Panther Party for Self Defense.