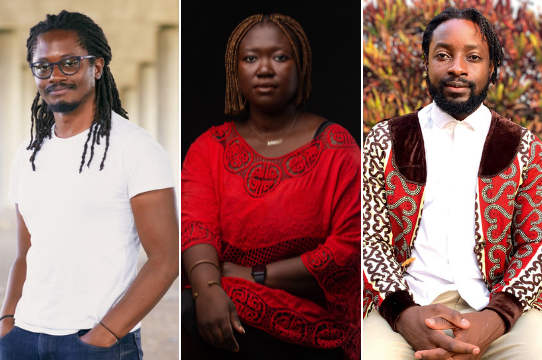 A conversation about Afrofuturism, space travel, and freedom with artists and filmmakers Larry Achiampong, Nuotama Frances Bodomo, and Aaron Samuel Mulenga. The discussion will center on the politics and possibilities the artists and filmmakers find in the creative transcendence of space and time, and how imaginings of space travel are utilized in their disparate practices.

In 1964, Edward Makuka Nkoloso, a member of the Zambian resistance movement and the founder of the Zambia National Academy of Science, began to train the first African crew to travel to the moon. Although space travel was not realized, the Zambian Space Program has since captured the imagination of contemporary artists and filmmakers on the African continent and beyond. Nuotamo Bodoomo, Larry Achiampong and Aaron Samuel Mulenga will talk about how imaginings of space travel are utilized in their disparate practices. The discussion will center on the politics and possibilities the artists and filmmakers find in the creative transcendence of space and time.

ADMISSION
Free and open to the public.
Attend online.
Register here.
[Note: this event was previously scheduled for April 19 and is now scheduled for May 16.]

Nuotama Frances Bodomo is a nomadic filmmaker of Dagaaba origin currently based in Tamale, Ghana. She earned a BA in Film Studies at Columbia University and an MFA in Film Production at NYU’s Tisch School of the Arts. Her award-winning short films Boneshaker (2013), Afronauts (2014), and Everybody Dies! (2016) have played at festivals including Sundance, the Berlinale, BlackStar, Telluride, Rotterdam, SXSW, and New Directors/New Films. Afronauts has participated in several group exhibitions, including the Whitney Museum’s Dreamlands: Immersive Cinema and Art, 1905-2016, the 2018 Venice Biennale’s Dimensions of Citizenship, & the 4th Edition of the Lubumbashi Biennale in 2015. She has also served as staff writer & director on the Peabody Award-winning first season of Random Acts of Flyness (HBO) and co-founded the New Negress Film Society. She was named one of Filmmaker Magazine’s 25 New Faces of Independent Film in 2014 and is a 2019 United States Artists Fellow in Film. Her work is currently streaming on Netflix and the Criterion Channel.

Aaron Samuel Mulenga is a multimedia artist from Zambia whose visual practice is inspired by concepts of ancestry and legacy, with a current focus on Zambia's space program and the Afronauts. His practice includes sculptural forms, installation, performance and collage. Mulenga is currently a PhD student in Visual Studies at UC Santa Cruz. Mulenga has exhibited at the Iziko Museum, Cape Town, the Zambia National Art Gallery, and the 2021 FNB Art Fair, Johannesburg in collaboration with Modzi Arts Gallery. Mulenga is scheduled to participate at this year's Congo Biennial in Kinshasa.

*    *    *    *    *
ABOUT THE SERIES
This event is part of Surge: Explorations in Afrofuturism, a multidimensional and transcultural month-long festival on Afrofuturism spearheaded by composer/performer Karlton Hester, choreographer Gerald Casel, and artist Aaron Samuel Mulenga. Afrofuturism is a global artistic and social movement, intent on imagining a world where African-descended peoples and cultures can live and flourish. Surge features music and dance performances, film screenings, and discussions to creatively engage Afrofuturist strategies for liberation and the restructuring of society free of racism.