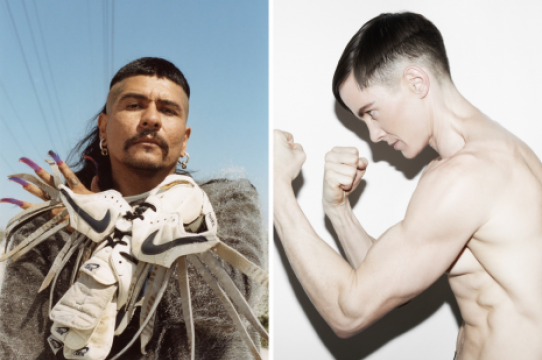 In Plain Sight is a coalition of 80 artists, led by Cassils and esparza, united to create an artwork dedicated to the abolition of immigrant detention and the United States culture of incarceration. On July 4, 2020, skytyping fleets spelled out artist-generated messages in white vapor over detention centers across the U.S. This action made visible what is otherwise purposefully obscured: the immoral and appalling treatment of imprisoned immigrants, exacerbated by the COVID-19 pandemic. For this Traction: Art Talk, Cassils and rafa will discuss In Plain Sight, from its conception to implementation, and consider the role of art, collaboration, and community in ending the government’s unjust treatment of immigrants, while providing material support for those most affected.

ABOUT THE SPEAKERS
Cassils is a transgender artist who makes their own body the material and protagonist of their performances. Cassils's art contemplates the history(s) of LGBTQI+ violence, representation, struggle, and survival. For Cassils, performance is a form of social sculpture. Drawing from the idea that bodies are formed in relation to forces of power and social expectations, Cassils’s work investigates historical contexts to examine the present moment. They have had recent solo exhibitions premier globally, including at the Perth Institute for Contemporary Arts, Philadelphia Academy of Fine Arts, and MU Hybrid Art House in Eindhoven, Netherlands. Cassils is the recipient of many awards and fellowships, such as a Fleck Residency from the Banff Center for the Arts, a Villa Bellagio Rockefeller Foundation Fellowship, the inaugural ANTI Festival International Prize for Live Art, a California Community Foundation grant, and MOTHA (Museum of Transgender Hirstory) award. Their work has been featured in The New York Times, Boston Globe, Artfourm, Hyperallergic, Wired, The Guardian, Performance Research, and Art Journal. Their new catalogue, Solutions, is published by the Station Museum of Contemporary Art, TX.

rafa esparza is a multidisciplinary artist whose work reveals his interests in history, personal narratives, and kinship—his own relationship to colonization and the disrupted genealogies that it produces. Using live performance as his main form of inquiry, esparza employs site-specificity, materiality, memory, and what he calls “(non)documentation” as primary tools to investigate and expose ideologies, power structures, and binary forms of identity that establish narratives, history, and social environments. esparza’s recent projects are grounded in laboring with land and adobe-making, a skill learned from his father, Ramón Esparza. In so doing, the artist invites Brown and Queer cultural producers to realize large-scale collective projects, gathering people together to build networks of support outside of traditional art spaces. esparza is the recipient of many prestigious awards, including of the Rema Hort Mann Foundation Emerging Artist Grant, California Community Foundation Fellowship for Visual Arts, and Art Matters Foundation grant. In addition to multiple solo and group exhibitions, esparza has performed at art institutions including the Institute of Contemporary Art in Los Angeles, the Museum of Contemporary Art in Los Angeles, the Whitney Museum of American Art in New York, and the Hammer Museum in Los Angeles. esparza's work is in the collections of the Guggenheim Museum in New York, Hammer Museum in Los Angeles, KADIST in San Francisco, CA, Los Angeles County Museum of Art,  Vincent Price Art Museum in Monterey Park, CA, and Whitney Museum of American Art in New York.