in conversation with B. Ruby Rich 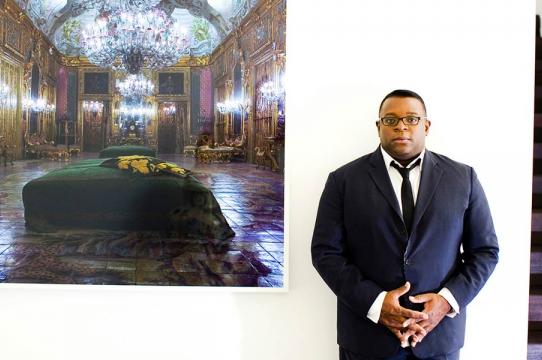 For TRACTION, Isaac Julien will be joined in conversation by feminist writer, film critic, LGBT activist, and UC Santa Cruz professor of film and digital media B. Ruby Rich. Longtime friends, Julien and Rich will talk about the upcoming exhibition of Julien's recent works, Kapital and Playtime, at Fort Mason as well as the recent rerelease and remastering of Frantz Fanon: Black Skin, White Mask .

Preceding TRACTION, on November 27-28, the IAS is hosting a marathon screening of Julien's films. See here for more information.

B. Ruby Rich is Professor in the Film and Digital Media Department, Social Documentation MFA Program, at the University of California, Santa Cruz. Since fall 2013, she has been the Editor in Chief of Film Quarterly, published by UC Press. She is the author of two books, both foundational texts that helped to define their fields: New Queer Cinema: The Director's Cut (Duke, April 2013) and Chick Flicks: Theories and Memories of the Feminist Film Movement (Duke, 1998). In 2015, she was named one of “25 female film critics worth celebrating” by Sight and Sound, the British Film Institute, London. In June 2017, Rich was honored with a week of events at the Barbican Center for the Arts and Birkbeck, University of London, entitled “Being Ruby Rich” saluting her work as critic, curator, and advocate.

Isaac Julien is a British artist whose work draws from and comments on a range of artistic disciplines and practices (film, dance, photography, music, theatre, painting and sculpture) and uniting them in dramatic audiovisual film installations, photographic works and documentary films. Born in London in 1960, where he currently lives and works, Julien studied at St Martins’ School of Art. Julien was a founder member of the Sankofa Film and Video Collective formed to expose the racialised unconscious of British Society in the Thatcher years, and subsequently of Normal Films established to produce queer cinema in a UK context. Julien is represented in museum and private collections throughout the world, including the Museum of Modern Art, New York, Tate, the UK Government Art Collection, Centre Pompidou, the Guggenheim Museum, the Hirshhorn Museum and the Brandhorst Museum. Julien has held several professorial, teaching and research positions in the field of visual arts and cultural theory over the course of his career. Current positions include Chair of Global Art at University of Arts, London and Professor of Media Art at Staatliche Hoscschule fur Gestaltung, Karlsruhe.