Beyond Black and White: Visualizing the 1992 Los Angeles Riots in the Artwork of Juan Capistran 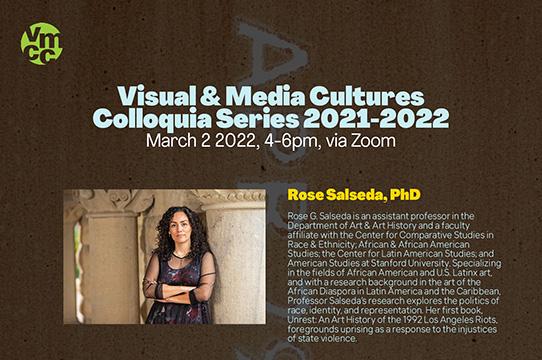 Professor Rose G. Salseda presents a talk, "Beyond Black and White: Visualizing the 1992 Los Angeles Riots in the Artwork of Juan Capistran," as part of the Visual and Media Cultures Colloquia (VMCC) series. On April 29, 1992, the acquittal of four white Los Angeles police officers who beat Rodney King, a black man, incited five days of protests, looting, arson, and assaults. While scholars have examined the videotaped beating of King and documentation of the unrest, few have focused on the potential of visual art to speak to the history.

*    *    *    *    *
ABOUT THE LECTURE
In this lecture, the art historian Rose G. Salseda will recover the important narrative. Through the critical visual analysis of Juan Capistran’s mixed media series From a Whisper to a Scream (2012), Salseda will address the black-white racial dichotomy that drives popular narratives of the riots, locates sites of conflict, and favors particular racialized experiences over others. She will also reveal how the artworks challenge these polarizing narratives and hold open space for overlooked cross-racial, immigrant, and intergenerational experiences of the 1992 Los Angeles Riots. Drawing from artist interviews, institutional archives, and information culled from museum collections, arrest records, court proceedings, and commission reports, Salseda will demonstrate how visual art broadens our understandings of unrest and the ongoing legacies of systemic racism and xenophobia in the United States.

ABOUT THE SPEAKER
Rose G. Salseda is an assistant professor in the Department of Art & Art History and a faculty affiliate with the Center for Comparative Studies in Race & Ethnicity; African & African American Studies; the Center for Latin American Studies; and American Studies at Stanford University. Specializing in the fields of African American and U.S. Latinx art, and with a research background in the art of the African Diaspora in Latin America and the Caribbean, Professor Salseda’s research explores the politics of race, identity, and representation. Her first book, Unrest: An Art History of the 1992 Los Angeles Riots, foregrounds uprising as a response to the injustices of state violence.

ABOUT THE SERIES
The annual Visual and Media Cultures Colloquia (VMCC) at UC Santa Cruz are a collaboration between the graduate programs in Film and Digital Media Department and Visual Studies in the History of Art and Visual Culture Department. The series brings an array of cutting-edge scholars to speak on a broad spectrum of subjects.