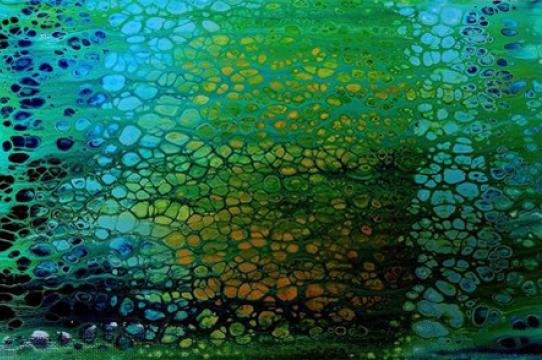 UC Santa Cruz art professor Jennifer Parker believes that algae are an “unsung hero of the planet”--noting that these photosynthetic organisms produce one half of the total global oxygen, while absorbing one third of the carbon dioxide produced worldwide.

Parker is co-founder of The Algae Society Bio Art Design Lab, an international collective of artists and scientists who work on issues related to sustainability and the environment, with a particular focus on the effects of global warming on algae.

She is also founding director of the OpenLab Collaborative Research Center at UCSC, which works to create and facilitate interdisciplinary projects between the arts and sciences. As an artist, Parker is interested in influencing the next generation to learn more about the environment and to actively help reduce the human impact on ecosystems. 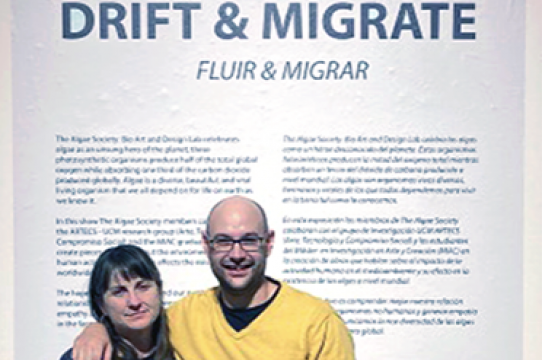 Parker recently returned from Complutense University of Madrid, where she put together an exhibition in collaboration with one of her former students, Jose Carlos Espinel, who is now employed there as a professor. Titled Drift and Migrate, it was the first exhibition by the Algae Society in Spain.

Designed to show the impact of human activity and global warming on the marine environment, the show included graphic works, photographs, interactive exhibits, audiovisual installations, and sculpture from more than 50 artists from different parts of the world.

“It is often surprising for people to learn what algae is,” Parker noted. “For instance, most people don’t necessarily know that giant sea kelp is algae. The topics covered in the exhibition range from plastics in the ocean to acidification of the ocean, and the effects that has on different species like coral and sea turtles, which are both vulnerable to extinction.”

“The main focus however is phytoplankton as the very bottom of the food chain and integral to the earth’s climate as they absorb carbon dioxide,” she added. “Warming oceans contribute to less oxygen, which make for less phytoplankton in some cases or in others, depending on which type of phytoplankton, it can cause a bloom. Both critically influence marine eco-systems--less food for fish as the plankton migrate to cooler patches of the ocean and more carbon dioxide make the ocean acidic, ultimately altering the global climate.”

Parker described the impact that collaborative artistic and educational projects like the Madrid exhibition can have on fighting (or adapting) to climate change.

“In a paper just published by David Roberts in Vox about the social tipping point for climate change and the things that ‘tip that point’, the education system is listed as one of the systems that must change to address climate change,” said Parker. “The Algae Society is formed by educators who are actively engaged in teaching—it's part of our formula to help better understand the role of human activity on species living on the planet.”

She added that The Algae Society will continue to expand its network in an effort to engage different regions and try different types of outreach opportunities.

“The ultimate goal/dream would be to have individuals around the globe shift their thinking of being extractors of the planet’s resources, or protectors of earth, to being collaborators with the earth as an equal partner and living in a symbiotic relationship,” said Parker.

“Practically speaking, we’d have cities around the world putting together Algae Society exhibits that share not only the role of how algae, at both the macro and micro level, behave in different ecosystems, but also share the beauty and wonder of these organisms and how cohabitation of the planet is vital to human survival.”