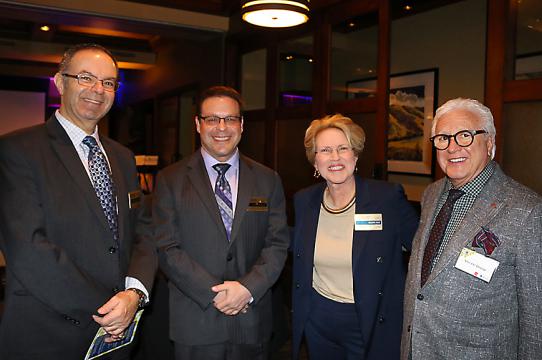 On February 27, 2017, the Arts Division at UC Santa Cruz presented its next generation of thinkers, makers, and creators in a dynamic Salon with UCSC alumni, trustees, and special friends. Hosted by Arts Dean Susan Solt and chairman of Lionsgate Television, Kevin Beggs (Porter ’89), the event, entitled The Arts: What’s Next, Now!, featured an impressive showcase of the Division’s educators and their current research and teaching practices. 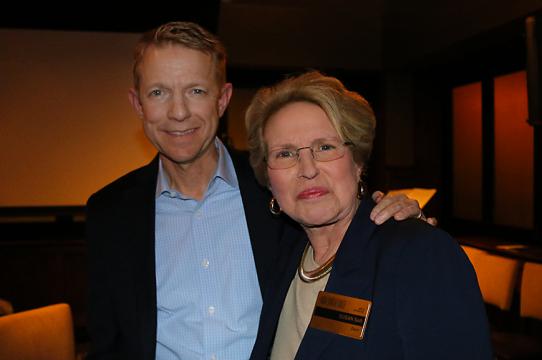 “It was so thrilling for me to see such a display of scholarship, curiosity, passion, and creativity in one room,” said Dean Solt. “I couldn’t be more proud of how everyone came together to share and discuss their inspiring ideas.”

Held in Los Angeles, where a number of UCSC Arts alums now live and work, the majority of guests who participated in the Salon are key leaders in the arts and entertainment industry.

But what really delighted these movers and shakers was entering a lively reception full of friendly faces, as old school friends re-united, and discoveries of current friends who are also part of the UCSC family were made.

"...it reminded me how much I appreciated my time at Santa Cruz..."

“As somebody who went to UCSC, it reminded me how much I appreciated my time at Santa Cruz and of the close community we still have,” said UCSC Arts Division’s Director, Special Projects Erica Di Bona, who, along with Chief of Staff Alison Trybom Lucas, was instrumental in organizing the Salon. “My goal was for us to celebrate being together and feeling connected to each other as well as to the university.” 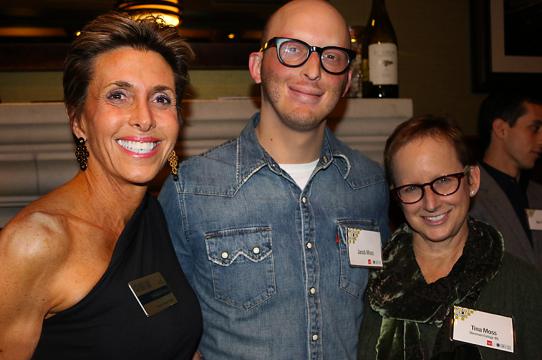 "UC Santa Cruz is emerging as a trailblazer in arts education"

“What a great evening filled with diverse talent in all aspects of the arts,” said Mohamed Abousalem. “I was especially impressed by the student performances, and so much enjoyed hearing from the faculty about their ground-breaking projects. UC Santa Cruz is emerging as a trailblazer in arts education. The Office of Research is pleased to support Dean Solt in establishing UCSC leadership in creative Innovation and entrepreneurship." 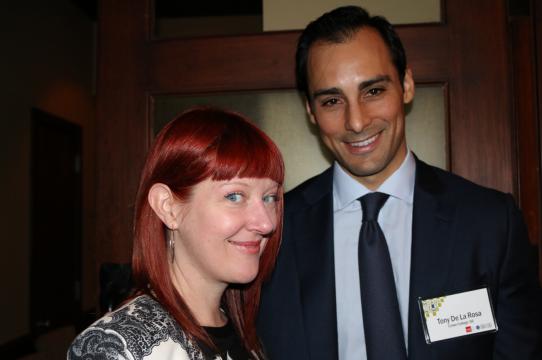 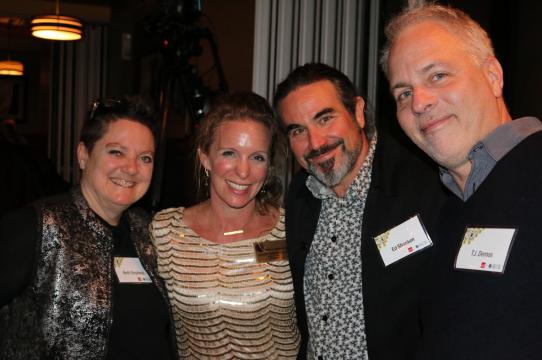 “Annie Sprinkle and I were delighted to be included in this impressive Arts Division showcase, with our wonderful colleagues, students, alumni, staff, and donors,” said Elizabeth Stephens. “Our E.A.R.T.H. Lab benefactors posted on Facebook that the Salon was the ‘best fundraiser ever!’ Dean Solt put together a hell of a show and we had a blast.” 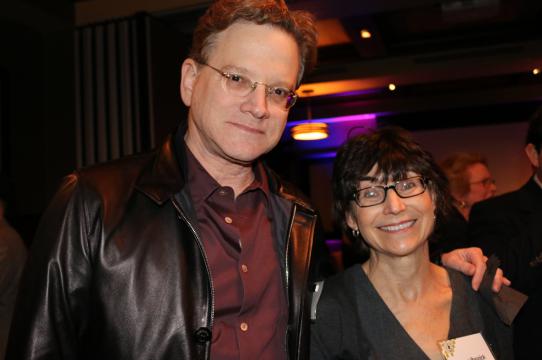 "...a fabulous introduction to Dean Solt’s leadership – we’re lucky to have her!”

“What a pleasure to meet so many UCSC alumni – so warm and enthusiastic about the school,” commented Dee Hibbert-Jones. “Wow…and a fabulous introduction to Dean Solt’s leadership – we’re lucky to have her!”

Guests were particularly struck by the exceptionally profound work that was presented by the faculty, which focused on critical social, political, cultural, and ecological ideas and actions. 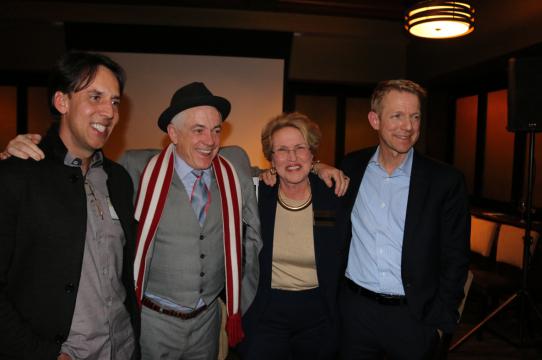 “I loved meeting alums and parents of current students in this packed, energy-filled event,” said Jennifer Maytorena Taylor. “It was especially inspiring to experience how deeply our model of teaching and learning has led to so much success for alums in the ‘real world’, and how our students continue to expand their own horizons through open inquiry and creativity.” 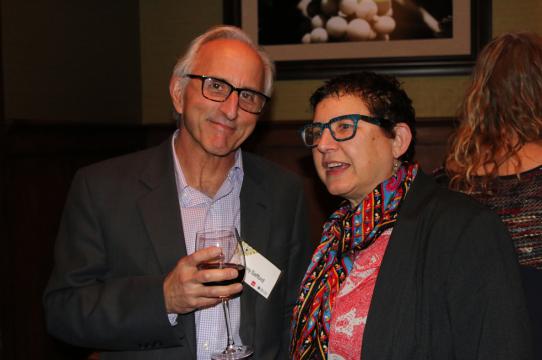 Via Professor B. Ruby Rich’s presentation, alumna and executive vice president at Pivot, Jennie Morris, was delightfully surprised to find out that a documentary film she had produced was by a filmmaker that had been a UC Santa Cruz Social Documentary student of Rich’s. 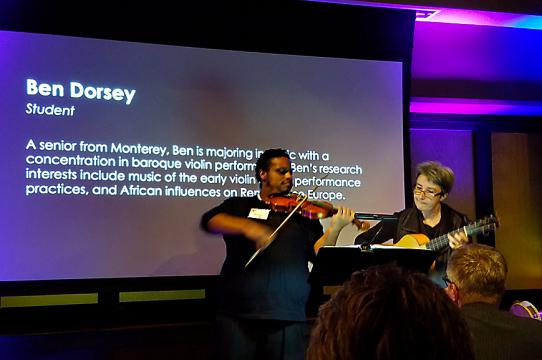 This was an especially important evening for Dorsey because he was able to meet his benefactors from The Michael Bonanomi Foundation in person, who have been tremendously supportive of his burgeoning talent and academic career.

Literature major Alex Perez also performed his stirring poem, Pablo Pueblo, written after Perez was motivated to respond to the nativist rhetoric of the 2016 presidential campaign. “Pablo Pueblo 2016 was inspired by an old salsa song written by Rubén Blades and Willie Colón, where Pablo Pueblo was portrayed as this everyman oppressed by institutional poverty and politicians that promised hope,” said Perez. “Of course, this is a song that resonates today as it did in 1977.” 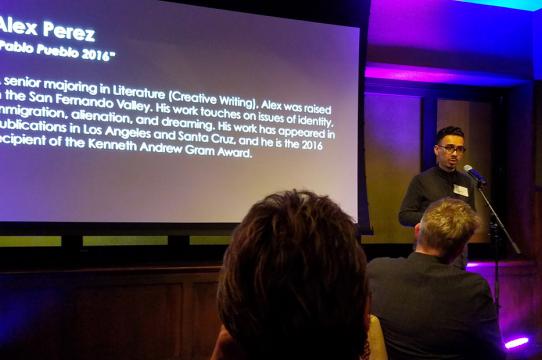 Sologne Patterson, who is a theater arts graduate student, recited a poignant monologue that focused on personal experiences regarding race and the struggle of trying to belong and be accepted in a culture where one is always in the minority.

"The Salon dramatized the powerful diversity and strength of art practices supported and taught at UC Santa Cruz, all sharing a basis in our fundamental values of social justice, environmental commitment, and path-breaking creativity," observed T.J. Demos. 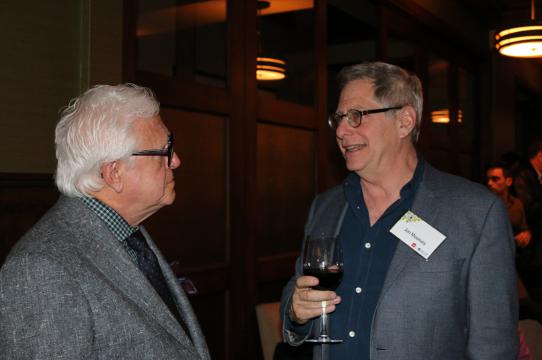 After the presentations guests still continued to enjoy more enthusiastic conversation, exchanges of ideas, and promises to get together again. Many, who were in the middle of demanding production schedules, specifically made time to attend the Salon and expressed how pleased they were for the opportunity to connect and learn more about the various Arts Division projects. 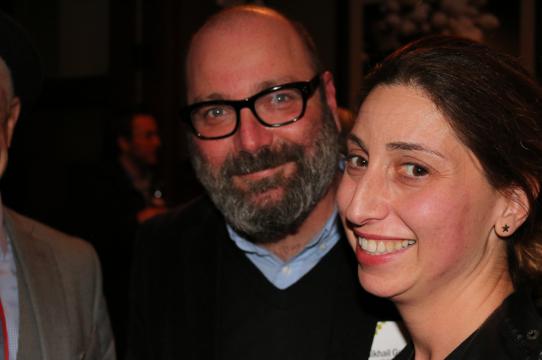 “So many stepped up to celebrate our alumni,” said Dean Solt. “It was very gratifying to be with such an remarkable group of people. I’ve never seen so much engagement at this type of event and look forward to our future partnerships.”