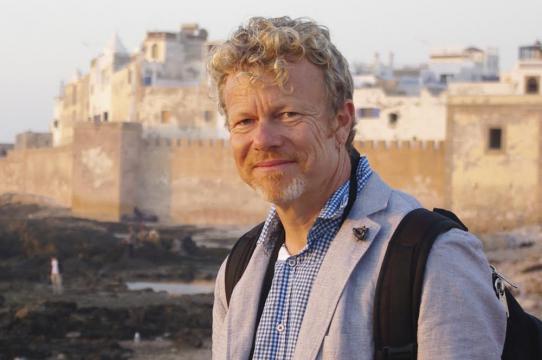 Peter Limbrick, who is currently researching and teaching film and video from across the Middle East and North Africa, has been busy over the summer writing about acclaimed Moroccan director and key figure in Arab cinema, Moumen Smihi. “Having just finished an essay on Moumen Smihi's career for a new collection on Middle Eastern cinema, I'm now working on programming the Smihi retrospective at other venues while I continue to write my book on his work,” said Limbrick.

Limbrick, who lead a very popular film series retrospective at the Tate Modern, London, curated nine of Smihi’s feature films for the program. Smihi, was thrilled with the work Limbrick and his dedicated team did to create subtitles for the films. During the extensive, 10-day event (which took place May 8-18, 2014), Limbrick introduced each film, held post-screening Q&As with the director, and compiled a comprehensive program guide with notes and translations of a selection of Smihi’s many writings on film.

Behind the scenes, a lot of work was done to create new English subtitles for the films. For With Matisse in Tangier and The Lady from Cairo, Limbrick collaborated with the Cinemathèque Française and the l'Institut National de l'Audiovisuel (INA) in Paris to obtain the original versions, and then had them digitized in California, obtaining subtitle lists from the director. Film and Digital Media undergraduates, Alejandra Monteagudo and Dominic Romano, produced new digital subtitles and exported them to new Blu-ray versions. One of the works, Matisse, was originally in French, so Monteagudo and Romano (both fluent French speakers) worked painstakingly alongside Limbrick to superimpose English subtitles on the existing French titles, while also re-timing them to match the original Arabic soundtrack.

Smihi was very impressed with the results, which allowed for his films to reach new, English-speaking audiences. The program Limbrick created was screened at the Pacific Film Archive in Berkeley, the Walker Art Center in Minneapolis, and the Block Cinema at Northwestern University.

Of the book he’s writing about Smihi, Limbrick says: “My book will be the first ever devoted to Smihi's long and important career, analyzing his films in the context of wider debates and questions about colonialism, modernity, and transnational cinemas in the Middle East.”

Limbrick is also working on two new articles. One is based on his recent research in Morocco on the vibrant modernist film culture of the 1960s and 70s – especially the short film, documentary, and experimental work that was produced during that period. The other essay is about Canadian artist John Greyson's video on the fate of the Baghdad film archives after the war in Iraq. In addition, Limbrick is continuing his research on other aspects of Arab cinemas throughout the region.

“Moumen Smihi is a true artist and intellectual so it's always a pleasure to be in a dialogue with him and his films,” said Limbrick. “Audiences at the Tate Modern were amazed by these beautiful and rarely seen films and his generosity as an interlocutor meant we had some wide-ranging conversations about Arab cinema, poetry, literature, colonialism, Japanese filmmakers, Hollywood…. you name it! It's been great to help create a public dialogue like that while I write my book about his work.”

Limbrick is the author of Making Settler Cinemas: Film and Colonial Encounters in the United States, Australia, and New Zealand, and has published on transnational cinema and postcolonial culture in journals such as Screening the Past, Cinema Journal, Camera Obscura, and Journal of Visual Culture.