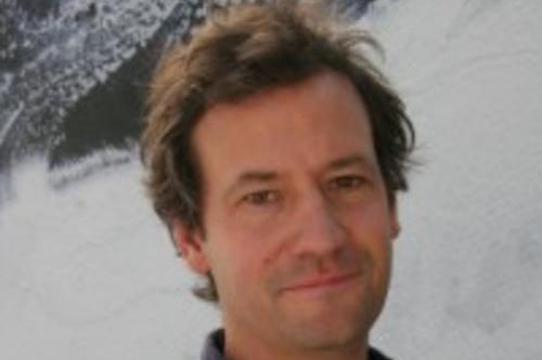 Visual artist and UC Santa Cruz alum (Porter 1995) Fritz Chesnut was exposed at an early age to art, especially since his mother earned her PhD in art education and his father, who has a Master’s in German, also studied music. They both attended UC Santa Barbara, where Fritz grew up, and his dad worked at the university as a computer programmer. “I was exposed to art through books and going to see art in museums,” says Fritz. “And both of my parents were very supportive of me wanting to study art and become an artist.”

As a child, Fritz found himself gravitating towards painting and drawing, copying Mad Magazine illustrations, comic book characters and spending his time in his own fantasy world that he created through his artwork. By the time he was in high school and was deciding on where to attend college, his parents suggested UC Santa Cruz. “I remember visiting Porter College in high school and walking through the quad, and it looked like that’s where all of the cool, punk rock weirdoes were!”

Fritz majored in studio art and, as a freshman, wanted to move ahead and take the intermediate and advanced painting classes. “I had an amazing time there, met a lot of great people and am still in touch with a handful of artists who were students at Porter when I was there. I also remember streaking through College Eight one night with a bunch of guys!” Good times.

One of his favorite teachers was Alan Firestone, who was a visiting art professor at the time. Fritz took Firestone’s 3D mixed media class and remembers his fellow classmates making incredible work in the class that “blew me away”. "Alan was very down-to-earth, super supportive and we had some great discussions in that class,” says Fritz. Another teacher who influenced him was Elizabeth Stephens, who taught welding then. “Elizabeth turned us on to a more theoretical approach that inspired me. She’s from a performance background and that was all new to me. I remember learning about Chris Burden [performance, sculpture and installation artist] through her, and his work at the time was endlessly inspiring.” After graduating from UC Santa Cruz, Fritz went on to earn his MFA at Rutgers University.

“Fritz was a brilliant live-wire and brought a lot of creative energy to my classes,” says Elizabeth Stephens. “I loved his spirit and the work that he made so much, that I encouraged him to go to my alma mater, Mason Gross School of the Arts at Rutgers, which he did.”

After grad school, in the late 1990s, Fritz’s work began being shown in artist-initiated galleries in New York City, and as he persevered with his work, he had more shows in more established galleries, including the Bellwether Gallery. Since moving to Los Angeles in 2008, he’s had solo shows at Country Club (both in LA and Cincinnati), and at CULT/Aimee Friberg Exhibitions in San Francisco. “My show in 2010 with Country Club in Los Angeles was at one of Rudolph Schindler’s houses called Buck House,” he says. “That show was amazing. I’ve never done a show where I thought so much about where everything would be hung. The house was like a perfect fit for my work.”

Fritz prefers working primarily with paint and his art is inspired by a plethora of fascinating objects and influences, including geological formations, punk rock, surfing, abandoned buildings and ruins, mudslides, satellite photos and earth art. He became well known initially for a dynamic series of photo-realist paintings depicting crowd scenes and performers that address fandom and idol worship.

His work as been described as “employ[ing] an intuitive process that allows for an interaction of paint based on subtle shifts in viscosity and accumulation. Chesnut's work filters the history of 20th century abstraction (Louis, Frankenthaler, Rothko) through an immersive lens of psychedelic Southern California surf culture.”

“I’m always attempting to make work that feels grown, or comes about through some process that includes time, gravity, temperature and color,” he explains. “I go through a process with my work, too, where each painting that came before directly informs the next one.”

He advises budding artists to just focus on learning and figuring out who they are, but to be open to making mistakes and failing. “It’s hard to see when you’re 20 years old, but there’s so much more maturing to be done before exhibiting and getting paid. The professional side of being an artist isn’t taught in college and for a reason I think, because those two concepts are pretty opposed to each other.”

Now married with two children of his own, daughter Stella age 10 and son Nolan almost 12, Fritz says he and his family really enjoy being together, especially family poker games. “I like dragging them all to the beach, too.” Coming from such a creative family, it’s no surprise that his daughter also loves singing, acting and musical theater, and his son loves to perform.

Since meeting his wife, actress and comedian Molly Shannon (Saturday Night Live and numerous successful films) ,15 years ago on a blind date, he finds that sometimes their work intersects when they attend museum galas together. His art can also be seen in the background of Steven Soderbergh’s film The Girlfriend Experience. Referring to his wife, he says, “Our work is so different that we seldom directly inspire each other, but I’ll read her scripts sometimes and have pretty strong opinions!”

Right now, Fritz is working on a new series of paintings using screens and stencils, spraying enamel paint onto wet acrylic paint that look like deformed patterns. He advises art students to get a well-rounded education, which is why he chose UC Santa Cruz over a more traditional, art-focused school. “I got into the San Francisco Art Institute, and when I went to visit, SFAI told me I should go to UC Santa Cruz if I got in there. I think that swayed my decision!”

Fritz also hopes to visit the UC Santa Cruz campus in the near future and looks forward to reconnecting with many of the faculty, as well as meeting the students and staff, and planning some inspiring arts events together.