The Mother of all Exhibits at the Sesnon 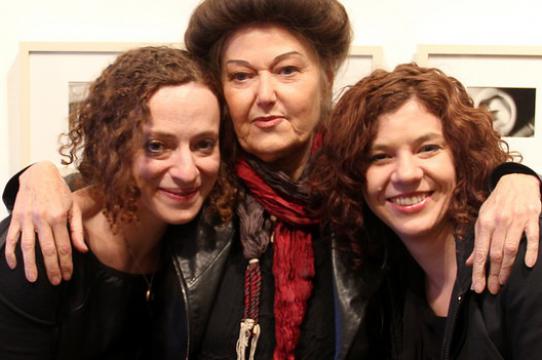 Feminist pioneer artist Mary Kelly spoke to a full house at a lively day-long symposium at the Digital Arts Research Center on February 5, 2014, an event which culminated in the opening for Complicated Labors, a multi-media exhibition occupying the Sesnon Gallery until mid-March. Curated by Film and Digital Media Professor Irene Lusztig, the exhibition brought conceptual artists, installationists, and photographers together to engage the audience in a highly welcome dialogue about feminism, maternity, and creative practice in the 21st century.

The symposium was designed to create a space for critical interdisciplinary dialogue around issues of maternity, feminism, art-making, and writing, explicitly updating the 1970s conversation within the current moment and putting writers in conversation with visual artists.

Return of the Matriarch

Nearly forty years after Mary Kelly’s germinal 1976 exhibition of Post-Partum Document, the work of women artists who explicitly engage with images, processes, and experiences of maternity remains marginalized and relatively misrecognized in the art world. Such was the initial prompt for the ambitious Complicated Labors exhibition. Despite a notable resurgence of attention to the maternal in 21st Century art theory and practice, such work is usually set within a context of sentimentality and identity rather than as representative of larger concerns with ecological systems, ethics, care, or labor.  Complicated Labors vividly investigates this problem, bringing together historical and contemporary work addressing maternal labor to ask questions about the status of feminism —and feminist art—today.