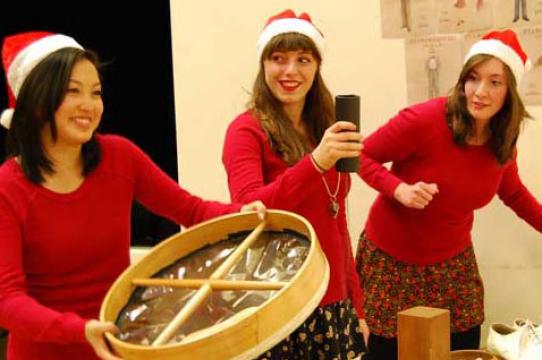 This year's UCSC holiday production, It's a Wonderful Life: A Live Radio Play, offers audiences something deliciously different. Many will already be familiar with the beloved Frank Capra film, It's a Wonderful Life, which receives new spin in the upcoming production. Stage actors will play radio stars of the 1940s re-enacting a version of the play for an imaginary radio audience. It's not as complicated as it sounds!

At the helm is Bay Area director Nancy Carlin, delighted to be leading a cast of student and professional collaborators. "I have the pleasure once again of directing the annual holiday co-production between Shakespeare Santa Cruz and the UCSC Theater Arts Department," Carlin notes. She finds the production "a really lovely, fun way to tell the story of this beloved Frank Capra film. Our actors play 1940s radio actors who perform the story as a radio broadcast, in front of a live studio audience - you! - complete with sound effects created right there onstage."

The whole concept of showing the behind-the-scenes effects that create dramatic, plot-enhancing sounds, brings its own set of challenges

Behind the Sound and Lights

Award-winning set designer Kate Edmunds has reinforced the play's nostalgic feel with period-based design.  "The set references a slightly earlier American Art Deco look, with the Manhattan skyline visible through a large window," Edmunds explains. "The sound effects—created in front of the audiences' eyes in the manner of old-time radio shows—recreate the vintage fun of live sound effects. What the live audience sees —how the sounds are created—and what the radio audience "know" they hear are surprisingly different."

Not only will the show's players be acting the part of radio performers broadcasting the well-loved story. They will also produce the inventive and outrageous sound effects, just as they would have been done by radio players in the 1940s. We'll be able to watch as on-stage actors use all those gadgets and accessories from tin pie plates and cookie sheets, to soda cans, sandpaper, aluminum foil, cellophane, rubber bands, and glassware, to mimic sound effects of storms, falling objects, rustling sheets, and car crashes.

"We find some of the props, and make others," reveals Lydia Bushfield, longtime SSC prop designer.  "The most of our work involves the Foley props —props used to mimic sounds." Bushfield and her crew had to solve problems such as re-creating the unique sound of a pre-WWII phone call. In another instance, making the sounds of a vintage cash register, "required designing five separate stages of sound," she explains. "We had to first push an adding machine, then add a bellhop bell tone, then shake a metal box filled with coins to mimic a sliding cash drawer. We dropped more coins on top of coins, and then finally moved the coin box back the other way."

To recreate the sound of an old model car engine, Bushfield's crew made "a machine that would make the chunka chunka sounds of vintage car. And our actors, do each one of these sounds."

"The play takes place in a live radio broadcast studio in 1946," notes costume designer B. Modern."The 'players' are all well known personalities from stage, screen and radio, and so I have costumed them in what would be their own clothing appropriate to a public appearance during the holiday season. I had a great time envisioning each of them as different sorts of classic movie characters from the period—the sweet young Girl Next door, a la Donna Reed; the beautiful, sexy Blode Bombshell, a la Lana Turner, the warm Fatherly Character Actor, and of course the sincere, goodhearted young American Everyman—Jimmy Stewart." Modern was happy "to have the ladies' costumes built from scratch and fit exactly to ouryoung actresses." Her goal is to make sure her actors "feel as comfortable as if they were wearing garments from their own closets."

Audiences will be able to feast on the collaborative creativity of designers and players alike in the unusual re-telling of a holiday classic. It's a Wonderful Life: a Live Radio Play opens Friday November 15 and runs through Sunday December 8, 2013. For schedule and tickets, visit the Events page.