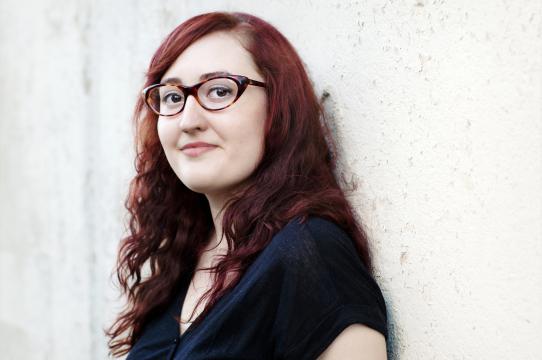 You just never know where being a student at UC Santa Cruz will take you. Just ask Emily Heller, who was a History of Art and Visual Culture major in the class of 2007, and is now on a very successful track in the entertainment world as a stand-up comedian and comedy writer in Los Angeles. From appearances on Conan O’Brien’s talk show, Late Night with Seth Meyers, and John Oliver’s New York Stand Up Show, to writing for the sitcom Surviving Jack, Heller’s star just keeps rising, and at a very quick pace. She also was named a Comic to Watch by both Variety and Comedy Central, is the creator and star of the Above Average series The Future and is currently a series regular on the TBS comedy Ground Floor.

When asked how she got interested in comedy in the first place, especially when it’s an industry with a notorious reputation for not only be extremely difficult to break into, but especially tough for women, Heller says that she’s had a relatively smooth experience. To top it off, she’s also a self-described feminist, but her incredible sense of humor allows her to poke fun at it, while still getting her point across. “People don’t really know what feminism is,” she says. “They don’t realize that feminism just means ‘people who believe in equality.’ They think it’s ‘radical castrating humorless bitches who don’t want anyone to have any fun.”

Growing up in Alameda, just east of San Francisco, Heller was raised in a creative family. “I had just your typical hippie parents,” she says. “My mom is an art teacher, my dad is a chiropractor, my sister is a filmmaker, and my brother is a musician.” She became interested in attending UC Santa Cruz after being a camper at Camp Winnarainbow, the famous circus and performing arts camp in Northern California founded by the legendary political activist/clown Wavy Gravy. “Lots of my camp friends went to Santa Cruz, so I knew that was the place I wanted to be. I was right!”

I think hot women have a hard time. I’m so glad I’m not hot….When I walk into a party, people say, “Oh hey, good for her, she got out of the house!”

Of her time at UC Santa Cruz, Heller says, “I was a HAVC major, but I dabbled in a lot of things when I was in Santa Cruz. I was pretty involved in the music scene, in that I went to a lot of house shows, and I also started making my own zines and giving them out at parties. My favorite teachers were Elisabeth Cameron, who advised me on this very ambitious project that I never finished, and Martin Berger, who taught me how to understand privilege.”

“Emily was a thoughtful and articulate student who showed an interest in understanding how social systems work,” says Acting Arts Dean Martin Berger. “I am not the least bit surprised to find that her comedy touches on our society's collective blind spots, particularly those surrounding gender." Elisabeth Cameron also enjoyed teaching Emily: “Having Emily as a student was definitely a fabulous experience for me as a professor! Combining her Art and HAVC major, she began working on a graphic novel exposing one of the world’s worst dictators, Mobutu Sese Seko. Only Emily could pull that off! If she ever wants to finish it, I’m ready and available!"

Heller took the stand-up comedy course at UC Santa Cruz that Doug Holsclaw was teaching at the time and that's how she got started in the field. She joined the sketch group SheBAM in its first year and was part of that for two years. “I'm super proud of the work I did in SheBAM,” she says. “And I'm thrilled that it's still going! Do they have a statue of me yet?”

I’ve been single for a while and I have to say it’s going very well. Like…it’s working out. I think I’m the one.

After taking the stand-up class, Heller and a fellow SheBAM member took the plunge and decided to sharpen their comedy chops at an open mic night in San Francisco. “I think we waited four hours for our turn to go up, at which point the host berated us for bringing friends, even though they were the only audience members left at the end,” she says. “It was pretty brutal, but things got better from there. That guy is still doing open mics and he is still terrible.” After graduating, she applied for a writing job on the sitcom Surviving Jack by submitting a script she had written for an original pilot, partially based on her time living with her “crazy” roommates in Santa Cruz. “Between my script, my stand up, and my interview, they decided to hire me. And boy do they regret it!”

From there, she started getting stand-up gigs which lead to being on television guest appearances with some very famous comedians, including Conan O’Brien and Marc Maron who she says were all extremely nice to her. “The weirdest thing to me about doing stand up on television is that when the curtain opens up and you walk out, there's no rope or anything pulling the curtain open. It's just some guy, standing there, holding it open. Not sure why that's the weirdest thing to me, but it is.”

She attributes her relatively rapid rise in such a harsh business as starting at the right time, in the right place and among the right people, and with a lot of encouragement from the people around her. “Also, I think I might be pretty funny. Not sure, though.” She advises students who might be thinking about doing what she does to just go out and do it. “The only way to get good at stand-up comedy is to do it. Work hard, be nice, and find what's funny about you. In my case, it's my butt, so I had to learn how to write jokes, too, because my butt can't tell jokes.” Heller’s favorite comedians include Maria Bamford, Hannibal Buress, and John Mulaney.

Go home, hug your spouse and know that I will not be doing that. Because Netflix does not have arms.

Heller is very excited to be on her first national tour right now, including stops in San Francisco (May 14/Punchline) and Santa Cruz (May 15/Veterans' Hall), and is recording her first comedy album in June. She jokes that her personal life is a nightmare, but otherwise she’s looking forward to continuing to write for more television shows and enjoying life in Los Angeles. “LA isn't that weird,” she says. “I keep thinking I see Dean Norris from Breaking Bad at coffee shops but then it just ends up being other bald guys.”