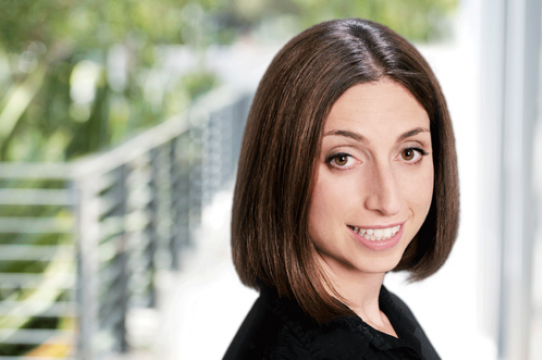 As a Porter College student at UC Santa Cruz, Jennie Morris knew that she would have an interesting career someday. Now, as the executive vice president of acquisitions, research and network operations at Pivot, the television network launched in 2013 by Participant Media, she’s thrilled to work for a company that airs socially relevant and critically acclaimed programs.

“Walking in the door every day, knowing we are working on creating and reaching people with content that inspires social change is incredible,” says Jennie.

UC Santa Cruz Dean of the Arts David Yager recently reconnected Jennie with the campus by asking her to join his prestigious Leadership Board, where she serves with a variety of alums who are also leaders in their respective industries. “Reuniting Jennie with UC Santa Cruz and the Arts has been a pleasure, as her energy and enthusiasm for our students and our programs are incredible,” said Yager.  “Jennie also understands the importance of re-establishing ties between us and her own network of alumni friends and colleagues, as they, too, can help support the work of our faculty and students.”

Jennie didn’t always know that entertainment would be in her future. Her love of languages, culture and literature, along with her family ancestry, led her to becoming a Russian Studies major at UC Santa Cruz. “While it was always in the back of my mind, when I was in college, I was not actually focused on going into the entertainment industry,” she says. “I subsequently married another UCSC Russian student, so I think it was well worth it!”

Jennie fondly remembers having several teachers who inspired her along the way. She also treasures the friendships she made. “I made some of my longest lasting friendships at UCSC and we shared so many experiences that we reference to this day, including trips to Natural Bridges, exploring the meadow, performances…the list is endless,” she says.

During her first year on campus, in 1989, Jenny also endured the notorious Loma Prieta earthquake, which was centered just 10 miles northeast of Santa Cruz and had a magnitude of a whopping 6.9, causing a tremendous amount of serious damage in the immediate area. “It was horrible and destroyed a lot of downtown,” she remembers. “That was quite a bonding experience, both to my newfound friends and also to the Santa Cruz community, even beyond UCSC.”

Growing up in Los Angeles in a warm and creative home, with her father who was in the entertainment industry and her mother who was a practicing psychologist, Jenny’s family was very social and exposed her to all kinds of people. So, when she toured UCSC, she immediately knew it was the right place for her due to its diverse student body and independent study options. “It was just what I was looking for.”

After graduating from UC Santa Cruz, Jennie worked in a language school while applying to a variety of graduate programs, and wound up going to law school, intending to put her talents toward helping important social causes.

Following in her father’s entertainment industry footsteps, Jennie decided to pursue the same field and, after earning a law degree, landed her first job at top independent film distribution and production company, Miramax, in the contracts administration department.

From there, Jennie made a very steady and successful climb in her career. Before joining Pivot, where she is now, she was the vice president of affiliate marketing for AMC/Sundance Channel Global. Prior to that, she held the position of senior director of program planning and scheduling for Sundance Channel. She was also at Showtime Networks for six years with roles including senior manager for new media, senior manager of international business development and supervisor of scheduling.

What makes Pivot especially interesting for her is how it also engages its audience by not only showing ground-breaking documentaries and films, but also providing information to viewers about how they can direct take action on issues raised during the programs.

“I see my work at Participant/Pivot as the perfect mix of my experiences and interests to this point in my career,” says Jennie. “I can think of nothing better that suits my personal and professional goals.”

About being a woman in an industry known for being dominated by men, she observes that women face obstacles across all industries but keep making inroads. “Each company has a different culture and my experience has been quite distinct at different networks,” she says. “I have learned to address head on when I feel decisions are being made that are gender based and I think sometimes, though certainly not always, I am heard.”

For students wanting to enter the field, Jennie advises them to set goals and take advantage of opportunities both personally and in the marketplace. “Think about where your skills and abilities are best suited and focus on a goal that is achievable, but don’t be inflexible.”

Of her time at Porter College, Jennie still has wonderful memories of it being a very special community that she was grateful to be part of. Porter’s focus on the arts also had a lifelong impact on her future, sighting her participation there as being one of the seeds that sprouted later in her life when she entered the entertainment business.

“I bonded with and remain friends with many of my hall mates from that first year and got in touch with a part of myself like no other time in my life.”

She was recently part of UC Santa Cruz’s the Business of Entertainment panel, along with five other, very successful entertainment industry professionals, and gave sage advice and industry insights to an enthralled audience of students, faculty, staff and members of the community

Now, as she continues on her outstanding career track, Jennie is looking forward to continuing working on television content that inspires social change. As part of the Arts Dean’s Leadership Board, she’s also excited about engaging with UC Santa Cruz students and helping them to discover how, they, too, can focus on their passions and make their own mark in the world.