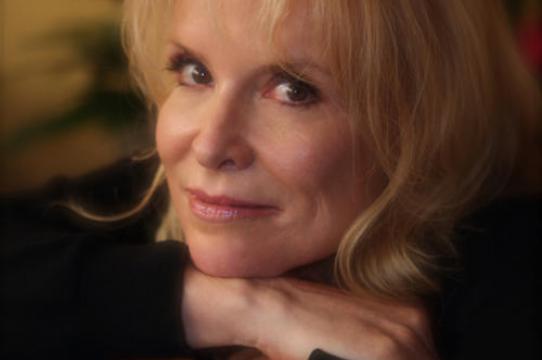 Growing up in Danville, California, Emmy Award-winning comedy screenplay writer and UC Santa Cruz, Porter College alum Anne Flett-Giordano got an early start on how to tell enthralling stories. Instead of the usual bedtime reading routine, her grandfather made up intriguing yarns about a deer called Twinkle Toes, inspiring the young Anne to make up her own Twinkle Toes adventures that took on a much more dramatic and thrilling spin. “Realizing I could terrify my brother and sisters with tales of forest mayhem is probably what kindled my desire to become a writer,” she says. That burgeoning talent eventually led her to becoming an extremely successful, multiple-award winning screenplay writer for several hit television shows including Frasier, Desperate Housewives, Becker, Kate & Allie, and Hot in Cleveland.

Attending UC Santa Cruz turned out to be a very auspicious decision, as it became the start of Anne’s journey to realizing her dream of becoming a screenwriter. She had a double major in psychology and theater arts. “A knowledge of both, in my opinion, is a must for any aspiring writer,” she says. It’s also where she met her future writing partner, and together they decided that they would take the plunge after graduating and move to Los Angeles to see if they could make it in the film and TV industry. “At an art opening in College V (as it was known in those wild and lawless days), I stole a bottle of cheap red wine with fellow student, Chuck Ranberg,” she recalls. “We took it up to his dorm room and drank and talked all night about how much we wanted to be screenwriters. I don’t know why we decided to try writing together…we were wicked drunk and massively sick the next day. But when we sobered up, we gave it a shot. We wrote my senior thesis, a rollicking tale of Wall Street malfeasance called ‘Crash’, and a 40-year partnership was born.”

She credits film professor Eli Hollander with giving she and Ranberg the encouragement they needed and fueling their belief that they really could set the screenwriting world on fire.

“As soon as we realized we identified more with Buddy and Sally on the old Dick Van Dyke Show than with Rob and Laura I think the die was cast,” says Ranberg. “We made each other laugh and had the same sensibilities, so it seemed a natural to try writing something as a team.”

Those first few years we really only had each other, and I think those shared adventures were enough to bind us together for the long run. Over the years when things get crazy behind the scenes it’s invaluable to have that other person meet your eyes across the room to say, ‘Yes, this really is as bizarre as you think it is.’ And then you get to laugh about it later.”

Leading up to landing at UC Santa Cruz, Anne says that as a child she studied Looney Tunes cartoons “like a Talmudic scholar.” She still treasures a picture of Daffy Duck that the legendary animator Chuck Jones drew for her after guest lecturing at a UC Santa Cruz animation class. Other early influences included being introduced by her sixth grade teacher to Eric Clapton and Cream’s Tales of Brave Ulysses, which inspired her to write tragedies for the more outgoing classmates to perform. “The worst divas I’ve ever had to work with, as sixth grade boys loathe taking direction and love to ad lib.”

Another turning point was in eighth grade when she was grounded for six months, forcing her to find interesting ways to spend her time, other than getting into trouble. Very fortunately, she discovered the works of Balzac, Kirk Vonnegut and Henry James during that time and learned a lot about great story structure in the process.

After graduating in three years, she travelled through Europe to visit friends, and just happened to be at Elstree Studios in London when a young, unknown geeky guy named George Lucas was directing an independent film about people in space that the studio was convinced would be a huge flop – called Star Wars. “Everyone on the lot eyed all of the weird space shit going by like it was nuts,” says Anne. “It seemed like such a silly movie. I never even bothered visiting the set. I am an idiot.”

She also hung out for a few days with none other than Paul McCartney who was also at Elstree at the time. “I was 19, just out of college, and I met [Moody Blues and Wings’ guitarist] Denny Laine in a pub. He invited me to the sound stage where he and Paul McCartney were rehearsing their Wings Over America tour.”

After that, it was time to make good on her goal to go to Los Angeles and pursue her dream. Ranberg joined her a year later. “We both had a series of insane jobs in the ‘industry’ to pay our cheap rents,” says Anne. “My favorite was when I was a beach extra on a Roger Corman movie called Thunder and Lightening starring David Carradine and Kate Jackson. I was lying in the sand when I heard the director and the production manager discussing whether to use me or a dummy to do Kate’s stunts. Since I could actually wave my arms and legs, they eventually chose me. I was in various car chase scenes, culminating in our driving through a store front, plate glass window. In spite of the seat belt, my head hit the windshield. The production people offered me a beer and Qualudes for the pain. No Union on low-budget sets!”

Getting involved with the now legendary B-movie director was another auspicious move for Anne, since it was through Corman that Anne met directors Ron Howard and Joe Dante. They were both just getting their start as directors then, as so many now very famous, actors and directors had done, intentionally wanting to work for Corman to gain valuable experience.

She and Ranberg also were secretaries at Lorimar Television on the former MGM lot (now Sony) for the hit primetime TV soap operas Dallas and Knots Landing. Like something out of one of their own comedy scripts, they both would sign up for the weekend work list when they knew the studio was hosting a big party. The studio guards would let them in the morning to work, then they’d stay after hours, write spec scripts together until the party started, then get ready to surreptitiously crash the party. “Chuck had a thrift store tux and I had a cheap evening gown. We’d put them on and just walk into these elegant galas liked we belonged. Cary Grant, Ava Gardner, Peter O’Toole, Bob Evans, the King of Spain, the Israeli Olympic team…we met everybody, and scored a ton of free shrimp.”

Filling every spare minute by diligently writing spec scripts, they eventually got the attention of comedy producer Bob Ellison, who had written for The Mary Tyler Moore Show, among others. Or as Anne describes, “he took pity on us”. “He saw me working on a script at my desk and asked what it was. It was a spec for a show being shot in New York called Kate & Allie. Bob knew the producer, so he sent him our script.” The producer liked the script so much that he called her back and suggested that she write another one. A few weeks later, she and Ranberg found themselves in Manhattan working as bona fide, professional TV writers.

Through the years, their outstanding talent lead them to create some of TV’s most memorable classic comedies. Of all the series she’s worked on, Anne doesn’t have a favorite since they’ve all turned out to be very positive experiences. “I’m so incredibly lucky to get paid to hang out with really smart people who make each other laugh all day. It’s pretty hard not to love them all.” She has many amusing stories, including one about actress Betty White (Hot in Cleveland) feeding marshmallows to a bear out of her mouth and inviting them to pet tigers in her dressing room. “She’s as nice as she seems and great role model for growing older with style.”

Recounting her time on Desperate Housewives, Anne says that the series had “a bunch of crazy bitches – I mean eccentric personalities – both male and female, in front of and behind the cameras. But most of those stories have been covered in law suits.”

Having won five primetime Emmys, Anne says her most treasured win was her first for Frasier. “It was the best because, unlike sex, your first is always the best, and because our presenters were Carl Reiner (my idol) and Cindy Lauper, who Chuck and I both love, but who chastised Chuck as were being played off stage for not having her latest CD.” Her most memorable award night was when she won her first People’s Choice award because she walked off of the stage in the wrong direction, and right into the arms of Aerosmith bad boys Steven Tyler and Joe Perry.

When asked to give advice to aspiring writers, she states that empathy, story sense and timing are key. She suggests that anyone who wants to work creatively should consider powering down periodically and be willing to think without any outside distractions. “Don’t fear the silence,” she says. “Hanging in college dorm rooms with no computers, cell phones, TV, etc., forced us to make our own laughs, and that was the best comedy writing ever! Not that I could live without those things now, but I think Mozart could hear his own music in his head because it wasn’t being drowned out by Spotify.”

Currently, Anne is enjoying her newest adventure of having her first novel published, a mystery calledMarry, Kiss, Kill. It has already reached number 11 on the Los Angeles Times Best Seller list and been nominated for best mystery by the Southern California Independent Booksellers Awards. She likes to peruse reader comments about her book on Amazon “like a maniac” and says that writing a book can be quite lonely. She’s grateful she could use the names of all the people she’s still friends with from UC Santa Cruz in her book, which made the process much more enjoyable. “It was like they were all there with me, laughing and being 17 again.”

She now enjoys living between her apartment in Westwood and her home in Santa Barbara that she shares with her husband, Arnie (who she met when he was a cameraman on Kate & Allie) and their cats. Her pastimes include doing a lot of reading and travelling, plus Pilates, swimming and kayaking.

Anne still has family in Santa Cruz, so she and Arnie visit regularly during the holidays, and since Arnie is an avid disc golf player, they run into a lot of UC Santa Cruz students at the DeLaveaga course.

Of her amazing career and remarkable life, Anne says, “I shudder what my life had been if not for a stolen bottle of art wine!”