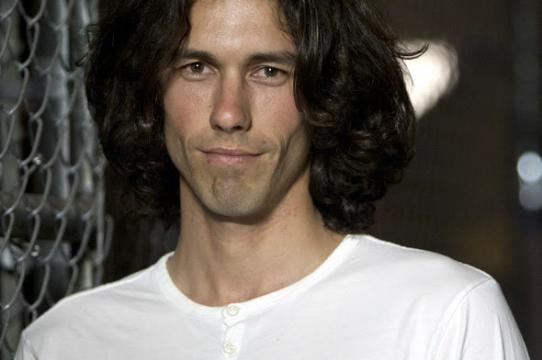 Growing up in Palo Alto, Calif. into a gifted artistic family, it seems natural that Tom Franco would want to pursue a career in art. Both of his parents studied art at Stanford University; his mother, Betsy Franco, is a well-known author of teen and young adult books, and both of his brothers, James Franco and Dave Franco, are famous actors. “We did art projects with my mom,” says Tom. “My parents never told us what to do or how to do it. There were always creative things going on.”

As a UC Santa Cruz alumnus (Porter 2002), Tom is part of the 50th year celebration and is currently teaching Curatorial Practice at the Sesnon Gallery with Shelby Graham, Lecturer and Director of the Senson Gallery, incorporating his CoLab approach to art. The class has been a wonderful success and the gallery has been filled with vibrant, life-sized self-portraits painted by the students. Open mic events, performance collectives, discussions and mural painting have been part of the ongoing process as well, and Tom has invited many artists who are UC Santa Cruz alumni members to perform.

Tom recalls being excited by illustrations and clay sculptures he did as a child and being encouraged by his teachers. He and his older brother, James, also went through a comic book phase and drew action figures together. But it wasn’t until Tom was in high school that the idea of becoming a bona fide artist really struck him as possible. “I remember being in school and the teacher was very stimulating, talking about what he did and he’d bring us on studio tours. We’d meet his friends and also his teachers. We got to go Manuel Neri’s studio. You can’t get bigger than Manuel Neri as a sculptor!”

One teacher in particular, Bill Iaculla, whose work revolves around using found objects along with clay, inspired Tom to delve into a new medium. “I hadn’t see that kind of art before,” explains Tom. “But something in my brain said I could make it. I really liked it. Bill was an example for me of an adult doing what I wanted to.” Tom also remembers when he and James started taking life drawing classes through a community art program and how their father, Doug, encouraged them to keep going. “Life drawing was a big deal and we were young teenagers in a class with naked models, so it was awkward,” laughs Tom. “My dad was a fanatical life drawer. He wouldn’t just do it -- he would overdo it! He had this fanatical art side that I also see in James, and he was obsessed with at least five subjects, so I definitely think that James got a lot of that from Doug, too.” (Doug died suddenly in 2011 but had started drawing again during the last year of his life.)

Tom’s mother, Betsy, provided a balance to the obsessive side of art making since she channeled her creativity into writing and had a more methodical approach to her work. “Once James was born, my mom didn’t have enough time for her art so she turned to writing,” says Tom. “She was always writing and she always had crafty things for us to do like collages.” To date, Betsy has written scores of books for teens as well as scholastic readers that use games and projects to teach basic skills, picture books, edited anthologies of poetry by teens, and more recently, her first book for adults called Naked with illustrations by Tom, which has recently been optioned as film. She and Tom, as well as the entire family, have a warm, close relationship and she regularly attends his shows.

“I wanted to go to UC Santa Cruz because it’s such a beautiful campus,” says Tom. “I was an art major but I didn’t want to go to an art school per se because I didn’t want to just do art. I wanted to learn on a much broader range.” Before attending UC Santa Cruz, Tom was accepted into the very prestigious California State Summer School for the Arts (CSSSA) at CalArts, which is a rigorous, pre-professional training program in visual arts that only takes top students. “It was amazing. There were various disciplines interacting and other artists would come in.”

At UC Santa Cruz, Tom focused on printmaking, sculpture and metal work. One of his favorite teachers was Jennifer Parker, the current Chair of the Art Department. “She was awesome and created a good space for us. We all hung out together…we were the ‘metal kids’.” Tom also created pieces in the foundry, studying under Doyle Foreman and Sean Monaghan. “We made a piece with Sean that’s at the Santa Cruz Veterans’ Hall.”

“He was wonderful to work with,” observes Jennifer. “As an undergraduate Tom had an undeniable passion for creativity and a strong drive to acquire contemporary art ideologies and skills to make ideas come to life. He proved to be a very energetic, creative and intelligent student who displayed a vigorous and focused attitude towards the art making process.”

“His work addressed some gigantic themes that centered on personal relationships and experiences,” she continues. “His ability to explore these themes without belittling them was a real tribute to his creative aptitude. Tom challenged his peers to go beyond the whimsical and playful aspects of his sculptures…to look at and investigate seriously what was beyond the very bright and colorful skins he applied to them.”

Tom’s father had introduced him to meditation, so after graduation Tom decided to use that time to learn more about it. He travelled to upstate New York to a meditation center there and studied the practice for six months. “I wanted to see if I could spend my life doing that. And I couldn’t,” laughs Tom. Instead, he used meditation to inform his work and still does that now. “That’s a big background to the process – meditation and visualization. Without that, it doesn’t go as deep. When students meditate, the creative process goes very deep and comes from a personal space that’s reflected in their work.”

While in New York, he also was hired at summer camps for kids and found that he loved teaching and working with them. He was a caregiver for a family, looking after their children, but when he tried to do his art as well, he found that he couldn’t do both and decided to return to California and focus on his primary passion.

Tom then took classes at California College of the Arts in San Francisco (CCA), studying metal and clay sculpture. “I realized that metal is the perfect medium because it’s solid liquid and is its own glue, as is clay,” he says. “With clay, I started doing the collaborations. A group of us got together to do projects and take them to the end.” Tom also met Berkeley sculptor John Toki at CCA who was one of his teachers and mentors. Toki has said of Tom: “Tom’s pretty unique in that he’s brought together a lot of young artists to make and show their artwork. No one knows how he does it. He’s like four men in one….He’s like an art-development renaissance man.”

Tom started going from working in metal to working in clay and then discovered house paint. “It’s not as obvious, but it’s a perfect medium. You can dip things into it and it’s a wonderful glue because it also has color. I assemble found objects then dunk the piece in paint and people wonder if it was made from clay or ceramics. Doug [my father] was really pushing that on me. He looked at how the found objects could become one piece.”

Tom was further motivated to use found pieces to create his sculptures after reading a book by artist Nancy Graves. “I found her by chance in the library,” he says. “Her work is found objects and it can be plants and various materials, and she casts them all in bronze and then welds them together, which is a lot of work! There’s no way I’m going to do that, but it has the same effect…objects transformed into one object so it works as one piece.”

His time at CCA also lead to his passion for collaborative art making. He and his fellow group of artists decided to get a space together and found an affordable fixer-upper in Berkeley that used to be a UC Berkeley dorm. They rented out part of it as studios and apartments to help pay for it. “I ended up driving the motivation to keep it going,” says Tom. “It was really fun but not a sustainable model because too much time had to be spent on running it.”

During this time, Tom, true to the Franco family nature of having multiple interests, was not only part of avant-garde dance troop and studying Tai Chi, but was also living at an ashram in Oakland where he met his wife and partner, Julia Lazar. Together they further developed Tom’s Firehouse Art Collective and expanded on Tom’s CoLab which gets artists together to create collaborative art projects. With Julia on board, Firehouse grew at a rapid pace and now consists of Firehouse Gilman Village Art Studios, Firehouse Gallery North, Firehouse Adeline Art Studios, Firehouse Harmon Street Studios, and Firehouse Live-Work Spaces at the Lottie Rose House, all in Berkeley. Julia, who died last year after a severe illness, was key in promoting Tom’s vision and making it all work.

“It started around food,” smiles Tom as he reminisces about meeting his wife. “I needed food and she was starved for art. We lived in the ashram together for about five years, then moved out and became a couple. We had five years as friends, five years as a couple, and one month as married.” Tom says that what they went through together was an incredible transition. “During those last five years we did a lot of positive things.”

As for the future, Tom, at age 34, looks forward to going farther with his collaborative art process and, with inspiration from his brothers, is even thinking about making films. He wants to bring the CoLab program to more high schools and universities, or to anybody who would be interested in his innovative, collaborative approach to making art.

“Of course, I want to do more of my own art,” says Tom about what lies ahead. “The Firehouse is a lifelong project and I’m very proud of it. I’m excited about the vision of having things sustained and more collaborators joining. Most people agree that art is good!”