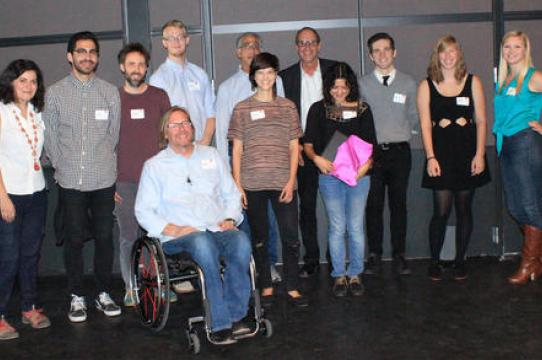 On Tuesday, October 6, the first celebration of the Plantronics Creativity and Innovation Scholars award took place at UC Santa Cruz. Ken Kannappan, the president and CEO of Plantronics and Darrin Caddes, Plantronics’ vice president of corporate design, joined Dean David Yager and the honored students for this very special event. Each student/student group received $1,000 for their project.

“We are so inspired by the creativity and dedication of these talented students and pleased to have the opportunity to recognize it by providing scholarships,” said Kannappan.

“When I first came to Santa Cruz I heard about Plantronics, not only as the company behind the first headsets that accompanied NASA astronauts to the moon, but also as an incredible place of creativity and innovation, and equally importantly, an incredible supporter of our community,” said Dean Yager.

Three of the awardees, Fabiola Hanna, Alyssa Glenn, and collaborators Ben Spalding and Adrian Phillips gave presentations of their inspiring and innovative work.

“We are incredibly fortunate to have Ken Kannappan and Darrin Caddes with us today,” continued Yager. “I first met Ken after he contacted me about speaking at a Plantronics anniversary event shortly after I became Dean of the Arts, and we quickly discovered our shared passion for approaching difficult problems in different ways. We are both also committed to fostering young minds in this way – thinking creatively, thinking innovatively. Ken, on behalf of Plantronics began supporting the Arts Dean’s Fund for Excellence, and this awards ceremony is our way of sharing Plantronics’ generosity with our students to help encourage their work and support their research.”

Darrin Caddes also has been a guest lecturer at UC Santa Cruz and was among the first group of speakers in the Arts Dean’s Lecture series in 2011. He has been a part of key collaborative discussions with students and faculty within the Arts Division.

The 2015 Plantronics Creativity and Innovation Scholars award winners are:

Art Department:
Undergraduate student Jairo Banuelos
Jairo researched the history and theories of the Arts and Crafts movement and William Morris' socialist philosophies before deciding to build his own Arts and Crafts chair from 2x4's. He placed the finished (quite perfectly handmade) chair in front of a jumbled pile of manufactured chairs then photographed a series of engagements between the two piles. In the Public Art class Jairo built a 6'x6' house as a commentary on house prices in Santa Cruz, which he then advertised on ebay as a rental. Finally he built wheels and a brace and carried the house (backpack style) though the campus.

Digital Arts and New Media Program (DANM):
MFA Students Andrea Steves and Timothy Furstnau
Last spring Andrea and Timothy developed the “Slugs To Sludge” Wastewater 5K Walk, following the path of human waste from toilets at UC Santa Cruz to the wastewater treatment facility in Santa Cruz. The project promoted awareness of the hidden infrastructure and the environmental costs of our modern sanitation systems, and tied this awareness to lived experience in the physical landscape, so that information is not just learned, but felt, embodied, and remembered.

MFA Students Adrian Phillips and Ben Spalding
Adrian and Ben collaborated on the game, You + the Garden: A Game of Exploration and Intimacy. This summer the two of them were honored to be invited to participate in Dare/Protoplay in Edinburgh, the UK’s biggest independent games festival, after You + the Garden was selected by the world’s leading computer game design competition for students. In the game, the player explores a low-poly garden space, falling in love with the game itself through a set of dynamic exchanges.

Film and Digital Media:
PhD student Fabiola Hanna
Fabiola’s work includes conducting, producing, editing, and transcribing interviews with Lebanese participants and observers of the civil war (interviews she traveled to Lebanon to find in the summer of 2010). As well as the design and implementation of software for indexing and retrieving stories, the design of electrical and mechanical systems for the construction of a booth for eliciting and viewing these interviews, and the authoring of well-argued and nuanced approaches to the philosophy and interpretation of history.

Music Undergraduate student Sarah Lindmark
In her service on the Chair's Undergraduate Advisory Board Sarah has offered many creative and innovative ideas to improving undergraduate programs. She has been instrumental in taking the initiative to promote the department on all levels. This year, she also stepped up to drive the revival of the much needed Professional Development Workshop series for undergraduate students. Sarah helped select relevant topics and facilitate discussions during these events.

Undergraduate student Janet Sanchez Noguera
Janet has recently won the prestigious "Lowden Young Guitarist Of The Year 2014" award for her composition and performance as a classical guitarist. She was also recognized in www.acousticguitar.com as the top 30 under 30 guitarists to know.

Theater Arts:
Undergraduate student Alyssa Glenn
Alyssa is a current student in Theater Arts with a design emphasis in Lighting Design. She has lit quite a few productions on campus while at UC Santa Cruz. She is an in-house student electrician for Theater Arts, a job that comes with a great deal of responsibility. In addition to this and her classwork Alyssa will be designing lighting in the new theater at the Tannery in Santa Cruz this winter. She also works at Santa Clara University as a member of their Theater Stage/Electrics Crew.  Alyssa is sought out on campus and beyond for an innovative conceptual approach to her work.

The Arts Division students and faculty expressed their enormous gratitude for the very generous support that Plantronics provided to ensure that these scholarships went to such deserving and outstanding scholars.