UC Santa Cruz Alum, Donor and Vintner Randall Grahm Looks at the Creative Side of Winemaking 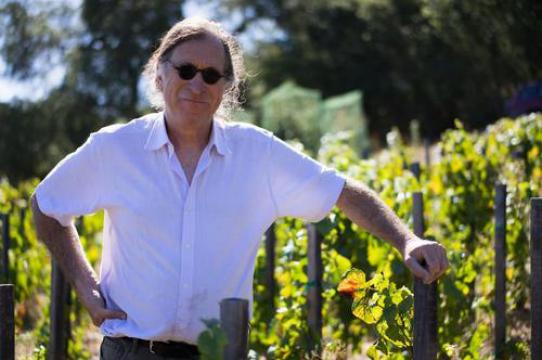 Randall Grahm is not your typical winemaker. While the wines he produces at his Bonny Doon Vineyard are exceptional, having garnered several rave industry reviews over the years, the road he took to success had a lot of atypical twists and turns. Growing up in Los Angeles and then attending UC Santa Cruz from 1970-74, where he was part of Porter College and studied philosophy and pre-med, Randall wasn’t sure what path to take after graduating.

“When I left UC Santa Cruz, I actually had no idea what I was going to do,” he says. “Not a single thought! From a perspective now, one would be completely freaking out if you didn’t know precisely what your were doing…how you were going to pay your student loans…but back then, you could assume that it would all work out, and it did.”

Randall refers to his time at UC Santa Cruz as a “golden age” where the students felt that anything was possible. “I had such extraordinary professors who I got to know and got to spend one-on-one time with,” he says.

Now, with a very successful winery, and another “Banana Slug” vintage on the way, Randall is looking forward to another great year. Since, 2012, he has very generously hosted a program for UC Santa Cruz art students to submit ideas for wine label designs to be used for special, limited edition “Banana Slug” red and white wines. “We bring the students from the Art Department in and do a competition and then select the artist who we think is the most attuned to what we’re trying to achieve.”

The idea to have students involved in designing labels was originally conceived by UC Santa Cruz’s Dean of the Arts, David Yager. “He was the primary agitator,” laughs Randall.

“Randall is one of the most creative and caring people I’ve had the pleasure of working with, he is a true friend of UC Santa Cruz and the Arts,” says Yager.

Sarah Williams, this year’s winner, just graduated from the Arts Division and was thrilled to have been selected. “Working with Julie Rogge [Arts Division Web Developer] was extremely rewarding,” says Sarah. “She helped me a tremendous amount throughout the process. This opportunity introduced me to graphic design which I have since been pursuing. It is extremely validating to see my work come to life so professionally, and especially encouraging as an anxious post-grad art major.”

Randall began the design project as a way to give back to the university and was intrigued by Dean Yager’s idea about having art students get involved with the label design. “Obviously, being an alumnus of UCSC, I want to continue to support the school,” says Randall. “And working on the design process of wine labels is one of my favorite things in the world to do, i.e. not so onerous.  It has been a lot of fun for us, and we look forward to the continued collaboration.”

This year’s Banana Slug Red is exclusively available at the Bonny Doon tasting room in Davenport as well as on the Bonny Doon Vineyards’ website. Ten percent of each sale goes to the Arts Dean’s Fund for Excellence, providing financial support for students.

When he was first starting out, Randall knew that he wanted to stay in Santa Cruz but wasn’t sure what kind of job he could do there to make that happen. So he found himself back in Southern California, working in a wine shop where he learned a lot, and got to taste a lot of outstanding French wines. After only a year, he realized that he really enjoyed the business, which lead him to take a winemaking course at UC Davis. He also discovered that his previous pre-med studies turned out to be perfect preparation for the chemistry and biology knowledge necessary for being a vintner.

“A number of things crystalized,” he said. “Tasting wine, drinking wine, selling wine…all that was quite nice. But I wondered if making wine would be a more satisfying, complete experience. So the light just went on. I don’t know how much self-reflection or self-awareness there was at the time, or there is even now! But what I did understand about myself is that I seem to have this ability as a synthesizer.”

That talent combined with his creative, eclectic personality enabled him to draw on variety of his skills, bringing his esthetic, practical, scientific and artistic sensibilities all together. He also liked being able to do many things at once.

Another issue that surfaced was the vital importance of being able to communicate about your product. “It’s useful to be a good winemaker,” he says. “But you also have to craft a narrative. I didn’t understand much in the beginning about marketing or business, but I did know that you need to differentiate yourself and define your own niche, which fortunately I was able to do.”

Getting his dream started from scratch was daunting, but with the help of his “very sympathetic” parents, Randall was able to purchase 28 acres of land in Bonny Doon. “We started out by growing Pinot Noir, which turned out terribly! But I was lucky enough to make a switch to Rhône varieties, which I found somewhat accidently, and that became my niche. I established myself as a leader in that area and was the first to popularize Rhône grapes in California.”

In just two years, his winery grew too large for the Bonny Doon location and so he moved to a more expansive space in Santa Cruz. “I didn’t understand anything,” he smiles. “I was really a terrible business man. I was doing everything by intuition. I didn’t have a business plan, but my business grew to be large and byzantine.”

Along with producing Rhône grapes for his wines, it was his incredible natural bent towards clever marketing that also put Bonny Doon Vineyard on the map. “For some reason, I have some latent marketing ability,” says Randall. “My detractors would suggest that my marketing ability is more proficient than my winemaking abilities!”

Before Randall hit the scene, humor and winemaking had never dared to mix. But he came up with the enterprising idea of making his wine labels more interesting and fun by using wit and irreverent humor. He also was the first to popularize screw tops for wine and to implement true transparency in wine ingredient labeling.

“It was a very stuffy business and still is a very stuffy business,” he says. “I was one of the very first to be more creative and anarchistic with labels. But it was also a double-edged sword. On one hand, it relaxed people and put people at ease about the wine, which was a good thing. On the other hand, it also undercut my perception of the seriousness and quality of the wine.”

But, in spite of certain perceptions, his wines were and have continued to be a big hit with consumers. And over the years, he’s received many accolades, including Wine and Spirits Professional of the Year by the James Beard Foundation in 1994 and in 2010 the Culinary Institute of America inducted him into the Vintner’s Hall of Fame.

Randall’s own anti-establishment persona and lighthearted spirit also contribute to making his brands so popular. Since 1984, when Bonny Doon released its inaugural vintage, Le Cigare Volant, which is still the winery’s flagship brand, the winery also had great success with its Big House, Cardinal Zin and Pacific Rim varieties, making it the 28th largest winery in the United States.

But with that kind of growth also came the realization that his winery had departed from its original intent of producing more distinctive, original wines. So Randall sold off the three larger brands and started on a renewed path. “We still distribute quite widely and are in all 50 states as well as overseas, and we produce about 50,000 cases annually.”

Bonny Doon’s most popular wine now is its pink, dry rosé, called Vin Gris. “Go figure! I want to be perceived as a great winemaker, and our pink is the most popular!”

Looking back on his life and career choice, Randall reflects, “I think my time at UC Santa Cruz gave me the confidence to do what I do. I don’t think I’d be doing what I’m doing if I had gone to school anywhere else, or had lived anywhere else. Certainly, in Napa, I couldn’t do what I was doing. They’d drum me right out of there in a second! But I fit right in in Santa Cruz.”