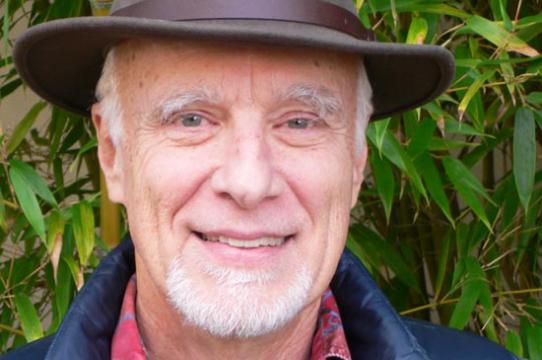 On the road, seeking sonic inspiration for his upcoming CD News from Afar, David Evan Jones trekked through three continents, ten and a half months, and a kaleidoscope of traditional music, contemporary performers, and spoken words.

While on a Fulbright-funded sabbatical last year Music professor David Evan Jones traveled to Korea, Cambodia, Israel, Turkey and Italy exploring vocal inflections to incorporate into new musical compositions. The composer was pursuing the next phase of an ongoing research project of "spoken" music, transformations at the intersection of news broadcasts and new music. The works will be included in his forthcoming CD, News from Afar.

"Three of the pieces I worked on for News from Afar while I was traveling used broadcast news to inspire musical compositions," Jones explains.  "First I began by choosing the ensemble I would work with, and then I incorporated local news stories, ones with global implications." Jones says he combed through newscasts, usually from Internet, of actual news events, listening for vocal quality and intonations of the broadcast speaker. After discussion with performers, Jones would electronically "tweak the vocal contours."

As he explains, "Singing moves between stable pitches, as opposed to the oscillating pitches of speaking." His quest was to stabilize the musical contours of the reader's voice, mapping both the speaking voice and the timing of the speech onto a musical time signature. "A mood could emerge—and a structure—and to these I added instrumental music in counterpoint. The goal was to bring some of the difficult news of our day into the contemplative frame of the concert hall where it might be received more reflectively."

In written articles, Jones has addressed some of the same theoretical issues underlying the strategies of composers to focus listeners' attention on the "sounds of speech, not only as cues for phonetically coded information, but as timbres, pitches, durations." In other words his musical creations invite the listener to hear words as abstract elements of a musical composition.

Jones' News from Afar, is scored for violin, guitar, and computer tape, in three languages. The second piece he completed and performed while a Fulbright Fellow in Korea "was based upon reports of the North Korean attack on YeonPyeong Island in 2010." This was written for daegum [a traditional Korean flute] and computer).  "The third, Jeju Epilogue—composed for Gayageum [traditional Korean zither] Quartet— is based upon the controversy around S. Korea building a military base in the middle of a UNESCO World Heritage sanctuary which is also the site of a traditional-people's village on Jeju Island.

Jones admits that he feels "an intuitive connection with traditional Korean music - and relished the rare opportunities he enjoyed while on research sabbatical to hear court music of the past performed by Korean masters.  "I approach the music of Korean with little knowledge but tremendous respect."

"Tsedek Chevrati? (Social Justice? in Hebrew) originally written for Ensemble Meitar—an Israeli ensemble based in Jerusalem—is the latest of the series of 'news broadcast' pieces I've been creating since 2010," Jones says of his sabbatical research. "Tsedek Chevrati?  is based on the series of huge and extraordinary "social justice"  demonstrations in Israel in summer 2011." For this composition, Jones used audio from YouTube recordings as well as newscasts to create an ambitious 13 minutes piece for quintet and computer.

In each case, found news accounts about a political moment, or demonstration, are woven into the music composed. The music seems to cradle the voice, and includes the ambient sounds of demonstrators in the background. Once he acquired the sonic information, Jones slowed down the movement, then edited, mixed and transformed the sounds. "I work very intuitively in transforming the voice. I'm interpreting the vocal intonations in my own way but I recognize that someone else might do it quite differently."

In the 1980s and 90s, Jones worked with synthesizing speech, especially the region where speech morphs into synthetic instrumentation. "I'm very intrigued by speech, the cross modal aspects of both speech and silence," he grins.

Of his life's trajectory David Evan Jones admits that it was always music. "I was playing jazz in high school— saxophone and flute. " Currently writing a piece for a Turkish kemence virtuoso, whose instrument resembles a small hand-held cello, Jones reveals he looks forward to "writing some absolute music" without text."