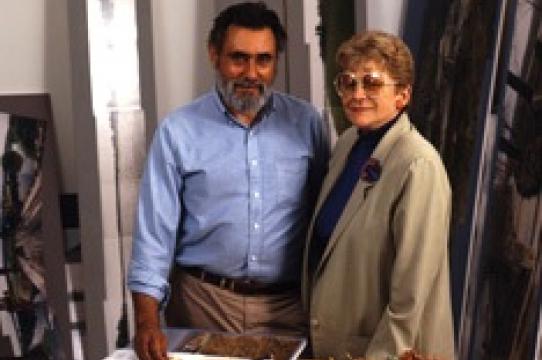 Newton and Helen Mayer Harrison — newly appointed Arts Dean's Visiting Eminent Professors — like to call themselves journeymen artists. "We journey from place to place," says Helen with a twinkling smile, "where we're invited, and where we feel we can do work." Interpreters of environmental distress, the Harrisons boldly proclaim the earth as their client. “Our work begins when we perceive an anomaly in the environment that is the result of opposing beliefs or contradictory metaphors." Such is the official announcement of their work as pioneer eco-artists, as much illustrated science as it is visionary social practice.

No scale, it seems, is too large for the Harrisons to consider as they address the mother of all contemporary issues—global warming—through re-mapping and re-thinking the very shape of things to come. History, ecology, politics and activist aesthetics weave through the work they have undertaken in a long career as partners, collaborators, and fellow travelers.

"Our research is science," Helen admits. "But when we want to help others understand, we use images. These help us to become storytellers."  As Newton Harrison puts it, "every place is the story of its own becoming. Every part of the human landscape begins with a story, trying to persuade others. A dam here, and a war there." They beam broadly at each other. This is one of their many inside jokes.

"Helen and I as free agents feel no obligation to accept anyone else's story. In fact we take issue with the story and veer it in the direction we prefer." Such narrative correction has brought international acclaim, as well as many eco-diplomatic commissions their way, and in late 2013 the Harrisons were named the first recipients of the Corlis Benefideo Award for Imaginative Cartography by the leading society for cartography, NACIS.

The Harrisons, who came as Emeriti Professors from UC San Diego to continue their research UCSC several years ago, have worked collaboratively for decades. And why not?  "We decided that we were in it together," Newton responds, "and that we could do better together than not."

The Map is the Territory

"We think we're in the Age of the Force Majeure—a state controlled by irresistible forces of nature— and we're setting out to define the current age as the Force Majeure—we have to adapt to it, and to begin to deal with it." Helen Mayer Harrison adds, "this is an ennobling problem. It is a fluid frontier—a frontier of events unto which we must adapt." The Harrisons see their work on the dominant force on the planet, thirty years of work, as "a critique of all other global warming scenarios."

To say that they think big, is to barely grasp the scale of their work. Currently the prime subject happens to be nothing less than the lavishly high and wide plateau of Tibet.

When not consulting with national leadership and public agencies over creative land use, the Harrisons exhibit their work in prestigious gallery and museum settings. Last month the Ronald Feldman Gallery in New York hosted a retrospective of Harrison work. Displays in the exhibition carried names such as, Greenhouse Britain, Breathing Space for the Sava River, Yugoslavia, The Seventh Lagoon, and Vision for the Green Heart of Holland. But now, "the thing that really interests us," Newton points out, "is Tibet."

A Force Majeure to be Reckoned With

The Harrisons, who currently consider Tibet rather than any government or political agency to be their client, are interested in finding pro-active "solutions" — future-inflected strategies actually—for environmental changes on a Google-sized scale.  "The ice is all melting up there, it rains more infrequently, there is flood and drought and on top of that, China is taking all of the water. The question we ask as ecological artists, is—since we're not going to accept that—what would 'Yes' be?"

The task is to rehabilitate 2 million square kilometers at risk. Studying the distant past can lead to strategically mapping out the future. Such visionary approach has influenced public policy both at home and abroad, as their collaborative practice seeks to map areas at risk in order to challenge large-scale discussions concerning eco-recovery.

"We do what we can, in what we see," Helen explains. " We get the feel of it, the people, the landscape, and we try to reach people in their minds. If you work with feelings, you can change minds. Art reaches you, you can feel it." But since "there's no way that an image can carry all of the information," Newton observes, "so we use text as well." Text in the form of elegant poetry. No "special talk," as the Harrisons call scientific jargon.

The lofty trajectory of the Harrisons'  research—mapping a possible future for interlocking eco-systems—is what Newton wittily describes as "rather original master planning."  Such global artwork is, he adds, "a hell of a lot of fun."