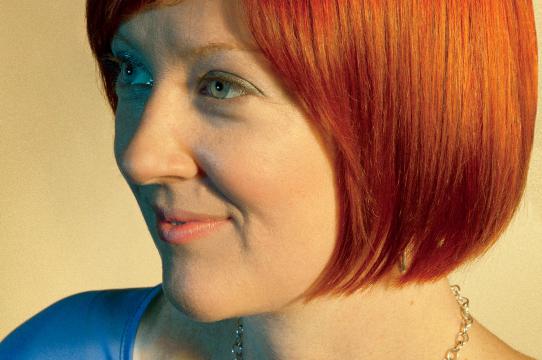 As the gaming industry continues to evolve from simple linear programming to cutting-edge artistic and interactive experiences, the Arts Division at UC Santa Cruz is leading the way in this sweeping change by taking education in gaming to the next level – and world-renowned game designer and producer Robin Hunicke will be a key part of the transformation. Beginning in January 2015 Hunicke will join the Art Department as Associate Professor and will help lead the new interdisciplinary undergraduate program in Games and Playable Media.

With a background in fine art, computer science and applied game studies, Hunicke brings a heightened perspective to game design that’s driven by ideas instead of only special effects. Named one of Forbe’s “Top Women in Gaming to Watch” in 2013, she received her BA from the University of Chicago and is ABD  in a PHD in Artificial Intelligence with a focus on Games and Game Design at Northwestern University

“Robin will be an invaluable asset to the Arts Division,” said David Yager, Dean of the Arts. “She has had a profound impact on the entire direction of gaming and will continue to do so. She’s leading the way in creating games that go much deeper into human experiences, emotions and sensibilities, and our students will now be a part of this vital and important next generation in gaming development.”

Best known for her role as Executive Producer on the award-winning PlayStation 3’s online cooperative game, Journey, which she developed while at thegamecompany, Hunicke began her distinguished career at Electronic Arts where she was recruited to develop multiple games including MySims and Steven Spielberg’s Boom Blox. She also worked briefly on the social Massively Multiplayer Online Role-Playing Game (MMORPG), Glitch.

She then went on to become co-founder and CEO of her own independent gaming company, Funomena. Their first game, developed in a partnership with Intel, is Luna. Hunicke has described Luna as “an allegorical, grown-up fairy tale that explores how we might understand and integrate past traumatic experiences in order to grow and accept how we are now.” Their second game, designed in collaboration with Keita Takahashi (Katamari Damacy, Noby Noby Boy), will be announced later this month.

Hunicke also is recognized for leading the industry into the 21st century with her advocacy for women in gaming, and for being an evangelist for diversity of thought and participation in game design and game culture. She has taken gaming to an enlightened, intellectual level by developing games that challenge players to collaborate around complex social issues and bring together teams to work towards a common vision.

“I am thrilled to be joining the amazing faculty, staff and students at UCSC!” said Hunicke. “I have always been drawn to the idea of supporting the next generation of game developers, lending my expertise to educational and nonprofit efforts that uplift games as an art form, broaden participation and encourage innovation. It's an honor to join in and help bolster the already exceptional initiatives in this area.

“I will be on campus starting in January of next year, and teaching in the spring! In addition to working on the curriculum for the Undergraduate BA in Games as Art, I will be teaching my course on the Foundations of Play, in which students build real world, non-digital games using the MDA framework as a foundation for design and expression.”

Hunicke’s titles have won several awards, including the “Online Innovation Award” for Journey and the BAFTA (British Academy of Film and Television Arts) award for “Best Casual Game of 2008” for Boom Blox. Recognized in 2013 for her role as ambassador for women at Microsoft’s annual Women in Gaming Awards, Hunicke also is an organizer of the annual Game Design Workshop and Experimental Gameplay Sessions at the Game Developer’s Conference, and has also chaired IndieCade, the annual independent game development festival.

She is continually sought after by mainstream and industry media alike for her ideas on what is now becoming known as “the deep game movement” where players score high points for empathy and enlightenment and not according to how many people are shot or blown up. The major high-tech magazine, FastCompany, in a recent profile of Hunicke said: “If anyone understands how to make grown-up games that are both smart and lucrative, it's Hunicke. [She’s] one of a handful of powerhouse female executives in a testosterone-dominated industry that can be shockingly hostile to women.”

Going in a more sophisticated direction away from violent adrenaline blasts, Hunicke’s creative approach to game development concentrates on artistic integrity, encompassing the importance of narrative, animation, sound and how games relate to real life and the way we live.

She teaches and lectures extensively on how developers can create novel, experimental designs by focusing on feeling. Her mission is to understand how games impact people’s lives and to create games that enable players to slow down, think, feel, and be inspired.

The Games and Playable Media program proposal is in the final stages of development and is expected to accept its first cohort in fall 2015.