Albert Narath Looks Deeper Into the Everyday Objects that Surround Us 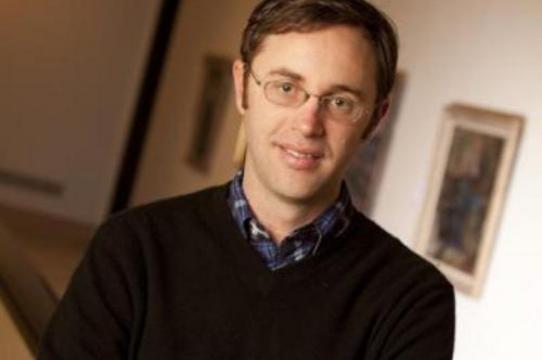 In his current course History of Design: The Objects of Technology, 1850-Present, Albert Narath, Assistant Professor, History of Art and Visual Culture (HAVC), has a distinctive way of looking at common items that gives a refreshing and insightful view of how we view such ubiquitous things as chairs and iPhones. “In addition to “masterpieces” of modern design, students are encouraged to interrogate a range of issues that go into an almost invisible landscape of everyday life that is constituted by objects,” he says. “We had a entire class on the chair, and also one on plastic where we talked about products such as Tupperware and Saran Wrap as they emerged in the wake of the Second World War.”

In his classes, Narath often takes urgent contemporary concerns and uses history as a way of thinking through how we can engage with these critical matters that affect our lives so profoundly. “The intersection between environmental studies and history, and the history of art and architecture and anthropology, is the terrain that I try to explore, specifically through questions about the relationship between nature and technology.” The point of studying relatively mundane things that are so enmeshed in our culture is to dig deeper and investigate the social and political, and even labor-related issues that feed the design of the world around us. “That’s really a driving interest of my teaching,” says Narath. “Especially when it comes to issues around the environment.”

Another class he’s currently been teaching is for Ph.D. students and is a seminar/workshop about the visual culture for remote sensing technologies, called Remote Sensation: Distancing Vision, 19thCentury-Present. “We see more and more stories now about drones, satellite photography, surveillance practices, and other image-based technologies,” he says. “The class becomes an experiment in thinking through what the stakes would be in applying the language and methods of visual studies to several pressing issues that emerge from these practices…so we’re tracing a history of remote sensing imagery by looking at aerial photography, satellite pictures, and other technical images in a range of contexts, from modern warfare to scientific disciplines such as astronomy and ecology.

“The students are doing a great job of interrogating ideas such as aesthetic judgment and how we’re trained to read images to issues of privacy, identity, and power. One of the imperatives of the class is to critically engage with remote sensing imagery: What do these images leave out? What are they convincing us of? Who’s using them and to what effect? These are some of the questions we’re involved with.” The class also will be visiting the Lick Observatory at the end of the term to look at all of the instruments there, and will view very rare 19th-century photographs in the special collections of the library.

“In my experience so far, the students have been equipped in a special way to be able to engage with these topics,” says Narath. “At the undergraduate level, this is a diverse student population with many different life experiences. The students have been naturally critical in their approach to art and architecture, which is wonderful. They seem to have a real social ethic about being a citizen and learning. I’ve noticed that that has really pushed me in developing my own classes.”

In developing his teaching in architectural history and design, Narath has drawn from his own research interests in the history and theory of modern architecture and design from the 19th century to the present. At Columbia University, his dissertation explored the interplay between art history and architecture at the turn of the twentieth century in Berlin, where architects attempted to radically re-think their practice in the face of rapid urban and political transformations. His current book project focuses on the reception of indigenous architecture in the American Southwest following World War II, when debates about ecology and technology were central to the social and political context of design developments both outside and within several Pueblo communities.

It was during his time at Bowdoin College in Maine that his interest in architecture began to emerge in the context of archeology and exploring spaces in which humans interact. “The social aspect of space became interesting for me and Bowdoin didn’t have an architecture program, so I kind of invented my own program and made it fit into an anthropology major,” he says. “And that still informs some of what I do.” Wanting to take his architecture studies further, he was accepted in the Master’s program in architectural history and theory at the Architectural Association School of Architecture in London (AA), earning an M.A. with Distinction. After London, he moved to New York, attending Columbia for his Ph.D. and during that time conducted research in Berlin for two years and spent a year in Washington D.C. in residence at the National Gallery of Art with a fellowship at the Center for Advanced Study in the Visual Arts.

Narath met his wife, Jolie Kerns, at Columbia who was also studying architecture. She then became part of Toshiko Mori Architect in New York and is now, in an auspicious coincidence, the senior architect at UC Santa Cruz.

After Columbia, they decided to leave their hectic lifestyle in New York and head out West to Oregon where Narath was offered an Assistant Professor position in the Department of History of Art and Architecture teaching Modern Architectural History. As one of the more popular professors there, he received a lot of compliments for his teaching style from his students: “He is such a good and funny professor probably one of the best in the department,”…. “Hands down one of my favorite professors! He is super smart and witty and makes boring lectures fun and enjoyable!”….“LOVE LOVE LOVE this teacher! He is hilarious and really tries to make the class interesting….”

When the job opened up at UC Santa Cruz, Narath was drawn not only to the physical location but also to the people who are here. “When I first came to the campus for the interview,” says Narath, “there was just a buzz here that was so wonderful from the Dean on down…just an exciting kind of atmosphere. And the emerging Institute of the Art and Sciences was also a major draw.”

Next year, Narath looks forward to teaching a large lecture class that will introduce students to the history of architecture at a global scale, as well as Design and Environment in the American West where students will examine a wide range of related topics from infrastructure to solar houses and the engineering landscapes of California’s Central Valley. “We’ll look at all sorts of things in order to pick apart the really important ideas about what it means to think about design in relationship to environmental issues,” says Narath.

Narath’s classes involve taking trips around the campus and doing projects about the structures. “One of the joys of being an architectural historian here is that the campus is such an incredible classroom itself,” Narath says. “This is not only an historically important campus, but one in which the architecture and the education philosophy were planned in tandem, which is such an remarkable circumstance.”

Another interest of his is delving further into the history of design in nearby Silicon Valley. Right now, it is just in the idea stage, but it might involve planning a course that centers around the area. “There are so many tensions in the everyday environment that we see in Silicon Valley, which at first glance is a nothing environment because corporate campuses are hidden away and strip malls predominate, and it’s flat,” he says. “So the point of the class would be to begin to learn from Silicon Valley. It has a history of development that hinges around ideas of environmental transformation, engineering the landscape for agricultural purposes, and also technological change.”

As he familiarizes himself more with Santa Cruz, his wife and their three-year-old daughter are really enjoying their beautiful surroundings, taking hikes, having access to CSA (Community Supported Agriculture) at the UC Santa Cruz Farm, as well as having the architecturally rich city of San Francisco within reasonable driving distance.

“For me, UC Santa Cruz has always represented a place of productive interdisciplinary experimentation, a commitment to social and political ethics in teaching and in research. “The possibility of interacting and collaborating with people from several departments here has already strengthened my research and teaching. It’s a great place to be!"