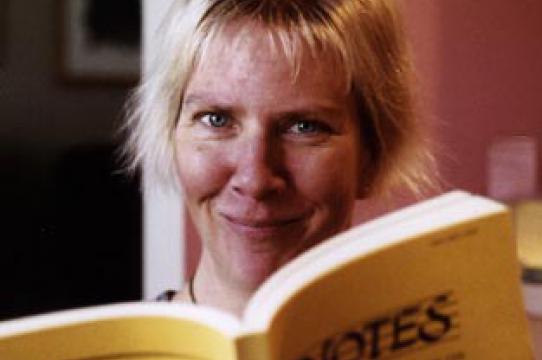 Haunted by an enduring interest in jazz icon Carla Bley, music historian Amy Beal took an editor's request for a manuscript as the perfect excuse to track down oral histories, study the music, interview Bley herself and finally write her latest book "from the 10th floor of the NYU Library—staring at the Empire State Building."

While not a household name in academic circles, Bley is considered something of a cult legend among avant garde and jazz aficionados. "I became aware of her in graduate school and started listening to her jazz opera, Escalator Over the Hill," Beal recalls. "It was composed during a time when free jazz, concept rock, that kind of experimentation was happening—the late sixties and early seventies. Bley was already involved with unlikely collaborators, people like the Cream's lead singer Jack Bruce."

Beal was teaching American experimental music at the University of Michigan at the time and asked herself, "why not jazz composers as a subject?  My dissertation was about John Cage and experimental music, and I became aware of stylistic prejudice in the academy in terms of narrow categories of music."  Why jazz couldn't be considered avant garde," she asked herself. "if we're teaching John Cage, why not Carla Bley?"

It was that determination to break down category barriers that led Beal to propose Bley as a subject when, three years ago, she was asked to do a book in the American Composers series.

"There were no books on Bley, no scholarly treatment that looked at her whole career." And it turned out that the editor of the series was supportive of the idea of featuring the pianist, composer. "I wanted the book to be in that particular series, because they didn't have any women or jazz composers.  It represents a significant leap on the part of the publisher."

Jazz has an obsessive cult audience well beyond that of classical music, Beal believes. " And this book, even though it's just come out, has already gotten lots of attention. Bley is very well-known in Europe, because they tend to support avant garde music more than we do." Bley was influenced to begin composing by the release of the Beatles' Sgt. Pepper album, "and the large music concepts that were happening in the early 70s." Largely self-taught, Bley dropped out of school to play at a piano bar and then went to New York to work as a cigarette girl at Birdland, the epicenter of the jazz world at the time.

"Free jazz was beginning, and independent composers were taking matters into their own hands," Beal says. "And pretty soon Bley and her husband at the time started the New Music Distribution Service, which would take independent labels, some including Philip Glass and Laurie Anderson, and give them accessibility. " This independent distributing group helped many non-mainstream composers and performers survive.

Bley composed for specific performers—an unusual departure for the times—and was so adept as a conductor and arranger that she was referred to as "Countess Basie" by admirers. "And at a certain point key people started recording her music—and this in turn helped her finance her own bands." One of the latest of these was called the "Very Big Carla Bley Band," and it showcased the richly diverse compositional style of a woman whose heroes included Duke Ellington, Kurt Weill, Johannes Brahms and Marvin Gaye.

"Essentially my book about Carla Bley is a 'life and works' book— not a work of theory," Beal explains. "I wasn't so much interpreting as trying to find out facts about Bley's work — which was hard," Beal laughs, "since she had skillfully shaped a public persona that didn't always match the facts. She was reclusive, and she was even a bit nervous to talk with me," Beal recalls. Carla Bley proved to be a contradiction. "She very beautiful, but self-conscious—famous, but reclusive."

Born in Oakland, Bley moved to New York in 1958 and now lives in Woodstock with her third husband, jazz pianist Steve Sparrow. A former student's friend of a friend helped Beal ultimately make the connection with Bley and convinced her to be interviewed. "I interviewed her second husband, her daughter, lots of her collaborators, as well as a really extended interview with her." The jazz archives at Rutgers provided useful background for the historian and Beal steeped herself in Bley's music. The result is the first in-depth treatment of the background, cultural environment and rich strands of influence that Bley and her experimental music invoked.

When not writing, Amy Beal teaches music history courses, "from Mozart to the present. And when I teach history of 20th century music, how can I leave out jazz?," she insists.  "I really try to ignore the stylistic boundaries that tradition has forced on us." Beal also directs the Music Department's Contemporary Music Ensemble, for which she plays percussion and piano.  "I'm a pianist by training."