Arts Professor Gets Ready for the Oscars 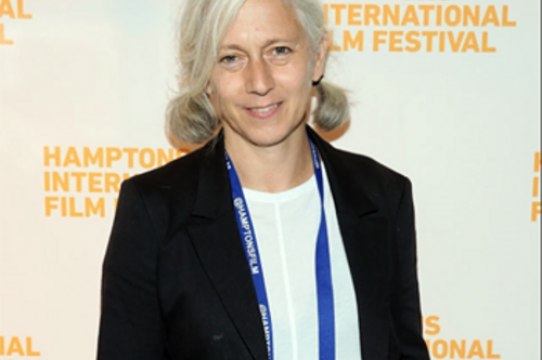 Never in a million years did Dee Hibbert-Jones imagine that she would be getting ready to walk down the iconic red carpet at the Academy Awards. But that’s exactly what she, along with her partner Nomi Talisman, are preparing to do as they try to comprehend the star-struck world of Hollywood vs. their once docile domestic life together in San Francisco.

Having recently been nominated for an Oscar for their highly acclaimed documentary short, Last Day of Freedom, Associate Professor Hibbert-Jones, who by day teaches Sculpture, Public Art, Social Practice and Collaborative Engagement, and New Media in the Art Department at UC Santa Cruz, still can’t believe how her life has changed so dramatically in such a short time. “It’s not just the Oscar night to prepare for,” says Dee. “It’s a full week of events leading up to the actual event…meetings, screenings, Q&As….”

On top of that in the middle of all this, Dee is still teaching and totally dedicated to her students. So, there’s a lot to juggle, and juggle well, which she’s doing with superwoman-like strength and aplomb. “It’s madness!” she laughs. “But we’re very lucky to be experiencing all this. I try to explain to friends what the insanity is, and it’s impossible to explain to anyone because it’s so much right now. I’m really, really, really busy!”

Since 2004, Nomi and Dee have collaborated on projects that deal with small people in big systems, and how these individuals are implicated. They first became interested in the subject matter surroundingLast Day of Freedom due to Nomi’s media job at an advocacy organization where she video-taped testimony for trials. “She kept coming home and saying how these people had such incredible stories,” says Dee. “Families of the accused who are, most often, entirely innocent.”

Their film tackles very complex issues of veterans’ care, capital punishment, race and criminal justice. Using over 32,000 stunningly drawn images, it tells the story of Bill Babbitt who must make an agonizing decision of whether to turn his brother, Manny, over to the police after finding out about a terrible crime he’s committed. Bill had been a death penalty supporter until it hit way too close to home. “We thought about metaphorically what would it mean to tell his story,” said Dee. “And Bill is such an eloquent story teller, so it was important to us not just to chase his story, but to create a sense of intimacy using animation.”

Originally thinking their project would be a lower-key educational film and installation exhibition that talked about notions of trauma, things changed when the filmmakers started interviewing Bill and hearing more about his personal and very tragic story. “Bill was incredibly articulate and we realized we were making a linear story, which we had not anticipated in the beginning,” said Dee. “So that’s how we came to that – through the stories – the story needed telling. We were really interested in how we could communicate that.”

It was also important for Dee and Nomi that the narrative did not become sensationalized or that it in any way glorified violence. Dee and Nomi sat together with Bill, Dee asking questions as Nomi did the cinematography, then they edited together, and began to draw. “The story was very painful and so was the editing of the story,” said Dee. “After shooting the video, I crawled into bed and cried for two days. Nomi was fine, but then when we started editing, she totally broke down.” But even though the process was so emotional and gut wrenching at times, they also really enjoyed creating the drawings which was a welcome relief from the intense emotions. “The drawing was challenging but really, really enjoyable,” said Dee.

So, far Dee and Nomi have worked six years on this amazing project and plan to make a series of films tackling similar issues based on other interviews. Just the animation alone for Bill’s story took two years.

When it was time to launch their labor of love out into the world, they started looking towards entering film festivals. “We had missed some of the major film festivals,” said Dee, “just because the film took us so long to do.” As fate would have it, their very first entry was at the renowned Full Frame Documentary Film Festival in Durham, North Carolina, which showcases outstanding national and international documentary films. Dee and Nomi were completely surprised when Last Day of Freedom won not only the Film Maker Award, but also the Jury Award for Best Short, awarded by the Center for Documentary Studies at Duke.

From there, the film went on to win the Audience Award for Best Short and the SF DocFest in San Francisco, the Jury Award, Best Short Documentary at the Hamptons International Film Festival, the Best Short at the International Documentary Association Awards, and several other top awards at various film festivals throughout the country. But it was, ironically, the very first film festival in Durham that got them on the Oscar track.

Since then, it’s been a whirlwind of activity as the filmmakers have also been working to gain more visibility of their documentary leading up to the Oscar voting deadline. In the process, the film has received constant rave reviews everywhere it screens. Most importantly for Dee and Nomi, is how much they care about the tough issues that are dealt with in their film. “I feel a huge urgency, while we still have the opportunity, to have a voice for these critical issues that the film addresses,” said Dee.

The Academy has also started something new this year where they are asking all nominees/potential winners to submit their “thank you” name lists ahead of time. (“Yet another thing I need to do!” said Dee.) Now, when the winners are on the stage, a scroll at the bottom of the TV screen will have the names listed, freeing the winners to make more meaningful acceptance speeches. For their possible speech, Dee and Nomi are talking to the organizations represented in their film and crafting words that will be meaningful about the issues represented in Last Day of Freedom.

And prior to the ceremony on February 28th, Dee also has had to think about such mundane things as what to wear and how to style her hair for the event. “I haven’t been focusing too much on that since there’s so much else going on, but I also don’t want to disgrace myself in front of everyone! I was going to do my hair in the usual pigtails, and my friend said ‘what are you doing?!’” laughed Dee.

Charging right along, Dee and Nomi are already working on a series of other stories of families impacted by the death penalty, which will be produced as a series of shorter films (5-15 minutes each) and an online site. The Center for Documentary Studies at Duke has invited them to be fellows for the next year to work on this part of the project.

“We were in the middle of doing more stories and interviewing more families, when all of this came up with the first film,” said Dee. “We do feel a responsibility to the other families interviewed, too, and we haven’t forgotten about their stories. But we felt that this one needed to go out in the world as an introduction to the project.”

In the meantime, they’re enjoying all the excitement of the moment. “We’re really delighted but totally stunned,” said Dee. “We recently went to the Oscar luncheon, a dinner, a red carpet event…and the thing that felt most surreal to me was when I was standing in the nominee group photo, and I realized I was standing next to Sylvester Stallone, and then Lady Gaga….I thought, this is really weird and so far away from my regular life!”