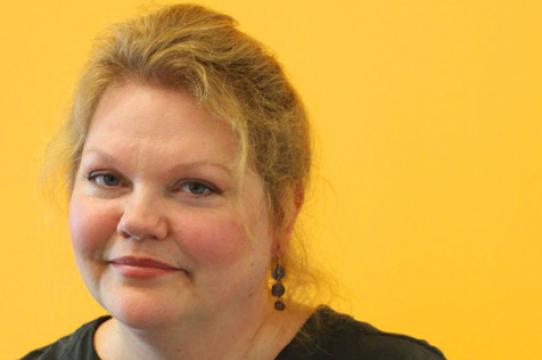 In her new book A Culture of Stone: Inka Perspectives on Rock, art historian Carolyn Dean rethinks prevailing notions concerning the importance of stone masonry in the Inka past. After a decade of exploring some of the most breathtaking high-altitude architecture extant, Dean sheds new interpretive light on the indigenous tale that the ancient Inka of the Andes married Mother Earth. Traces of that union still remain in the ruins of Inka stonework integrated astonishingly into the outcrops of living rock, as a sort of symbolic union between the powerful Inka empire and the natural environment itself.

Research for her Culture of Stone manuscript wasn't her first foray into Peruvian antiquity. “My initial work was on colonial indigenous festivals in Peru,” she recalls. “And while doing archival work on festivals, I found an opportunity to look at Inka archaeological sites. Since the archives are often closed because of strikes, it was hard to count on having access. So I began to visit sites, partly to provide context for my teaching and partly just to see them.”

At first glimpse of the fabled Inka stonework, Dean was captivated. "The walls were the most beautiful things I'd ever seen." Dean realized that "somebody had to say something about those walls - that it wasn't just about how they were built as a practical achievement.” Dean's work confronts tired academic clichés about the Inka viewed merely as architectural engineers, lacking artistry.  Their astonishing masonry—intimately grafting shaped blocks onto existing rock outcrops—led Dean deep into the heart of Andean folklore and worldview. She spent five years visiting numerous Inka sites throughout their vast empire from Ecuador to Chile, looking for patterns—of myth, form and linguistic reference.

Although there were ample functional reasons why the Inka, living in an area prone to seismic activity, would anchor their buildings upon firmly rooted rock outcroppings, Dean sensed that there was more to the story. “There is symbolic meaning in natural stone, meaning that is revealed in Inka stories about rock.” Many stories she collected spoke of stones interacting with human beings and coming to life. The earth cooperated with humans.

Architecture was an Inka way of inserting order into a chaotic world, of domesticating the high-altitude wild. In the distant past and even in contemporary Peru, stones, as part of the natural world, were and are considered to be sentient. The distinctive Inka architecture of rectangular structures and trapezoidal doorways and windows also helped to mark their territory, indicating imperial ownership. This territorial statement reached its finest expression at Machu Picchu where stones weighing many tons were precisely hewn, refined and inserted into living rock—domesticating conquered lands. The incredible walls, Dean discovered, "are made of 'nibbled' stone, carefully hewn away to make for tightly fitted building blocks." The term "nibbling," a more accurate translation of the Quechua than the Spanish phrase "wall of fine masonry," literally describes the process of turning the stone from a natural element into a cultural one. By being shaped, the rocks were being "civilized." As her own theoretical focus took deeper shape, Dean's research turned to photographing the sites, their details and the landscape contexts.  She returned again and again to document these structures in digital photographs, many of which illustrate her manuscript.

A leading scholar in the field of Pre-Columbian visual studies, Dean recently consulted for an April 2011 National Geographic feature on the ceremonial role of Inka mummies entitled "The Genius of the Inca." With the publication of A Culture of Stone bringing to fruition the architectural phase of her Andean work, Dean is making plans to return to the Colonial period of Peru, to examine the relationship between the mummies of dead royalty and their stone embodiments, or "hosts."  These stones were believed to contain the actual spirits of dead Inka rulers, and as a result threatened the Catholic hegemony of Spanish colonizers.  "It's been exciting work, Dean admits. "I've seen places that very few people have seen.  I love the high Andes - even though I always get altitude sickness," she laughs.