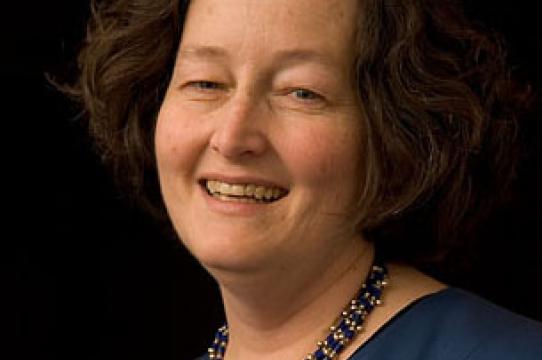 "It was always Africa," admits Elisabeth Cameron, Associate Professor of the History of Art and Visual Culture, and holder of the Patricia & Rowland Rebele Endowed Chair. Even after the past summer conducting fieldwork in the Democratic Republic of the Congo, Cameron says she always looks forward to returning. A specialist in post-colonialism, Cameron's exploration of central African visual culture has focused on two primary research sites in the area of her birth. The Congo—"a country that has experienced a lot of political upheaval"—and Zambia.

"I was born and raised in the Congo. I couldn't imagine studying anything else. My heart family—the people who have known me since the day I was born—are still there." Such lifelong engagement and dialogue have provided Cameron with a unique perspective on her research material.

Preparing to complete her UCLA doctoral research in the Congo, thanks to a Fulbright scholarship, Cameron found her access suddenly barred by political events. "It was 1992, and there had been a street riot outside the French embassy. A stray bullet hit the ambassador." Cameron got a call from the Fulbright people saying she couldn't go, and that she had to find another suitable place to finish her doctoral work. In order to keep her Fulbright grant, she opted for Zambia. "I went from being the best-prepared graduate student, to being the worst-prepared," she grins.  Staying with a family named Chitofu, Cameron found herself in a community in the midst of boy's initiation ceremonies. "And I found that the mothers were very much involved in these events." Women's initiations into their childbearing years, and then the participation of those women into their son's initiations, quickly became the focus of her research.

Witnessing highly visual ceremonies, including "lots of masquerades, body paint, scarification, performances, dramas, and seclusion,  I was also very interested in how an ancient tradition lives on in a modern world. How did the ceremony adapt in order to maintain itself, to keep going?" she wondered. Some answers began to emerge.  "For example, I saw the women's ceremonies had become blended with Western bridal showers."

Cameron's latest book project looks at both colonial and mission architecture in Kasai Occidental Province, Congo. "I'm most interested in missionary architecture. In 1889 the Presbyterians came and brought American architecture. They were Americans from the South and many of them had been through or had memory of the Civil War. The original settlers built a mission station from local materials, but in old southern architecture, in the manner of plantations," she explains. "They had specific ideas of what you should build and how you should live."

Varieties of spatial configuration are significant in Cameron's research. "There is a big difference in how you live in space if you're from Congo or an American—especially in the Victorian era. An American lives primarily indoors—you live inside your house. There's an emphasis on privacy, on the use of curtains," she continues. "But if you are from the Congo, you live outside your house. The house is only used for storage or for sleeping. And 'privacy' takes on different meanings."

This past summer, accompanied by a HAVC graduate student and a photography student from Moravian college in Bethlehem, Pennsylvania, Cameron continued to pursue this work, "It was interesting to see the architecture through their eyes.”

Belgian settlers introduced the mud brick to the Congo in the late 19th century. "They forced everybody to use mud bricks, and to build square buildings with multiple rooms." Such architecture radically changed the nature of living space for native residents who might have previously lived in circular dwellings. While the Belgian occupation ended in 1960, "Western influence on living space still continues," Cameron contends. "People wanted to live in Belgian-style houses and that style continues to this day."

"I have a lot of book projects," she admits with a laugh. A book that will be out next spring, co-edited with John Peffer, is called Portraiture and Photography in Africa, which also includes an essay by Cameron. "The other current one— the Iconoclasm project—I'm finishing this year.” Co-authored with Zoe Strother, a colleague from Columbia University, the manuscript deals with types of ritual destruction of objects, for example in initiation ceremonies, at the end of which masks are burned.

Post-Colonialism and the Cell Phone

All of the years of fieldwork continue to feed both her inquiry and her UCSC coursework. "I haven't burnt out on any of it," she beams defiantly. "Because it's about people, people and their creativity."' Cameron will admit that the down side of her particular research area is that it takes time and effort to reach the center of Africa. "The internet has helped," she observes. "Most people have access in some way to a cell phone, so text messaging is possible. But where I do my work in Congo, there are poor roads, no electricity and no running water.  It's rewarding, but also frustrating."

The African countries in which she works have both changed, and yet remained in many ways the same as when she was a girl.  "There's the telephone now, and different merchandise is available, but there are also many of the same problems and struggles. Despite their remote settings, Cameron says she never tires of Africa. “If not for the costly airfare, I would go every year.  It's gorgeous and the people and their arts are incredible.”