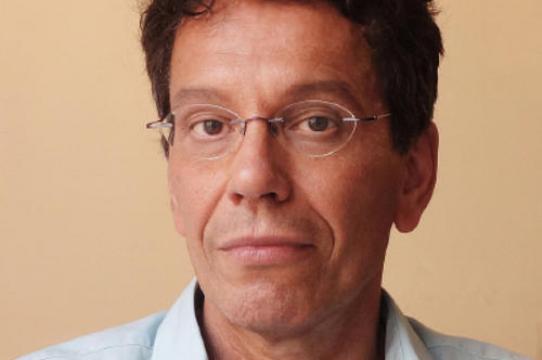 Having recently arrived all the way from Madrid, Enrique Leal, Assistant Professor, Print Media, is getting to know his new home of Santa Cruz and is enjoying the bucolic, natural surroundings here. It’s a major shift but one he’s appreciating due to not only being able to teach print media, but also because he can continue creating his own artwork on campus in his studio.

Leal’s much-admired body of work focuses on observance, along with trying to work with things that are unobserved and have to do with natural phenomena, cumulating in beautifully executed images that are thought-provoking and moving. His pieces are currently held in several public and private national and international collections, including New York Public Library, Menil Collection, Calcografía Nacional Madrid, Bibliotheque Nationale Paris, and Merril Lynch, Madrid.

Over the past few years, he has been developing many fascinating series of works, including theEntomography Series which consists of a variety of cast objects and prints that reproduce the engraved surfaces of tree branches formed by bark engraving beetles. “The beetles burrow into the trees between the bark and the trunk and they actually zap up all of the nutrients in the tree,” says Leal. “These are devastating insects, but they create very unique, compelling looking objects. If you look at the engraving on the surface on the branches, you see very intricate patterns and clean incisions, as if they were made with power tools.”

Leal originally created the narrative around the insects and developed the body of work at Rutgers University as a visiting artist and professor. The process involves documenting the beetles’ incisions and then pushing them through different print mediums. The results show how manual, mechanical and digital technologies can, by inducing their innate enhancing and reflexive properties, unfold the material, morphological and metaphorical meanings of impression.

Born in Brazil, Leal came to the U.S. as a child when his father accepted a position at UC Santa Barbara to teach Spanish Literature. His mother was offered a similar position at Rice University in Houston, where he grew up. “A lot of my interests have to do with my parents being university professors,” he says. “I was exposed at an early age to appreciate culture and reading. While at Rice, my mother also organized summer courses abroad in Spanish and Portuguese Literature and she would take me with her, along with my sisters. We were travelling from a very early age and exposed to the whole European culture. My mother was very keen on us having extra curricular activities and we developed an interest in art at an early age.”

Growing up in Houston, Leal was also exposed to various forms of culture, such as avant-garde cinema, the works of major European film directors, and attending lectures by important contemporary artists, including video artist Bill Viola, musician/performance artist Laurie Anderson, filmmaker Wim Wenders, and actor Dennis Hopper. “Most people think of Texas as not having much culture,” says Leal. “But the Menil Foundation brought in a lot of artists. I once was able to see Philip Glass perform a private concert at a lecturer’s house. It was a very interesting time back then.”

Leal attended high school at the College of Performing Arts in Houston, which was a very innovative, experimental school at the time and became interested in print making. He started training as a printmaker which lead him to an apprenticeship in Europe, working in printing studios for artists in galleries. But when the time came to advance on to training as a print master and to make a more serious commitment to the profession, Leal decided instead to follow his artistic passion. He started painting and doing photography in Madrid, which lead him to an auspicious opportunity to teach print media at what was then a new, cutting-edge university, the University of Castilla La Mancha, Spain College of Fine Arts in Cuenca.

“The faculty was mostly adjunct and the dean was able to make an agreement with the president of the university to bring people in who were professionally engaged, rather than people who only had degrees,” explained Leal. But when the university changed their curriculum and wanted to give degrees in visual arts and studio arts, the teachers had to also have advanced degrees in order to continue teaching, so Leal and his colleagues got on track to earn their MFAs and PhDs

His career at the University of Castilla lasted 30 years and was only threatened, as were all of the teaching positions, by the austerity measures that came about during Spain’s recent economic crisis when funding for health and education were cut. With the end of the university’s financial support, promotions and faculty research were frozen, leaving the professors with some tough decisions to make about their futures. Since Leal had grown up in the States and had travelled back and forth to the U.S. over the years to visit his father at UC Santa Barbara and also to lecture and exhibit his work, the idea of moving here was still a risk but not as daunting.

Leal stresses the importance of working within parameters and likes to talk to his students about how having certain restrictions can only enhance their work. “Constraints are not something that will necessarily limit your expression or ability,” he says. “On the contrary it’s going to help you. Having a lot of freedom can be distracting.” He’s also developing course work that incorporates contemporary issues and is more interdisciplinary.

Leal advises his students not to worry about finding their own voices within their work, at least not yet. He encourages them to do, see and to keep learning for as long as necessary in order to be better informed about how their artistic voice will eventually come through.

As he settles into his new life here and gets used to the differences between living in the middle of a vast, bustling, international city to a much more nature-infused, quieter environment, he reflects on what lies ahead and also at how his professional path has transitioned, especially now that he’s teaching at the University of California where his father had taught for 30 years. “It was a really strange twist of events and it’s interesting how life unfolds,” he says. He regrets that his father passed away before knowing that Leal would be teaching here, but is grateful to be closer now to his mother who still resides in Houston.

“There is so much support at UC Santa Cruz and the resources are incredible compared to anything I’ve seen, even in Europe,” he says. “That’s why I chose to come here. The fact that I have my own studio is amazing.”

Leal is really looking forward to teaching classes again. He’s been enjoying not only having art students in his class, but also students from other departments. “What was also very rewarding was having the students who weren’t art majors, they were very pleased, thanked me and complimented me with the way the course was done. Transmitting the enthusiasm I have to my students is my favorite part of teaching,” he smiles.