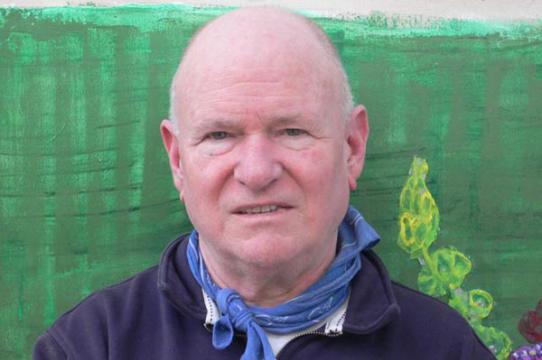 Painting on digitally-printed canvas, painter Frank Galuszka is currently embarked on a multi-generational series of works that reflect both his seasoned on-site painting techniques and experimental digital technology.

The point of this reiteration, through digital printing and further painting, of previous work is that the artist can coax new meanings out of images that were already powerful. "I'm interested in taking these essentially anti-photographic plein air printings and translating them into a more expressive and less "documentary" realm. Starting with 'real life' I am pushing into the fictional, adding trees where there were none, heightening mountains, removing meadows, changing the weather." Galuszka says his major inspirations in the landscape are Turner, Whistler, Friedrich, and Monet.

"The current series is literally built on top of adjusted on-site studies done several years ago in Italy, and reflects my longterm involvement with painting the landscape. And actually," he admits, "it comes out of a dissatisfaction with practical limitations of working directly from life."

"The new series stemmed from practical matters having to do with weather and arthritis," he chuckles. "Because if a painting is beyond a certain size, both painting and easel can be be knocked over by the wind. But if you work on a small canvas, there's only so much detail you can get. The issue of changing light means there's only so much area that can be effectively addressed in a day." Given the long hours, climatic conditions and physical exertion involved in painting outdoors, the artist is enjoying a very new production concept. "Right now I'm working on paintings built upon digital prints of studies of earlier paintings." This new generation of former work, "came together because of my needs and ideas that digital research associate Peter Harris had. We refer to the digital prints as 'cartoons,' just as Renaissance painters called their preliminary drawings."

The highly experimental process involves taking one of Galuszka's paintings, photographing it, and manipulating it in the computer. Then the image is printed onto canvas and used as a guide for a future painting. Using the large printer in the DARC Cellar, Galuszka and Harris can print on canvas up to 44 inches on the shorter dimension.

"Since I tend to place the original image onto the center of the canvas before printing, I can expand the image outward on all sides as I paint onto it." Hence he can literally open out the original painted image and make it "more panoramic, with much more sky—and much more space. "The current series of ten paintings done in this fashion are built upon works done on Lake Como during two painting trips to Italy a decade ago.

Another phase of Galuszka's current research involves experiments with new paints invented by the Golden Paint Company. "The Golden developed a slow-drying acrylic paint about four years ago," the artist explains "and I've been using that paint to create soft edges as well as other techniques." Both the paints and his process are "still highly experimental, with some technical glitches." Glitches such as adhesion and color-shift during drying. Because the canvas Galuszka's images are being printed on is meant for digital prints and is not gessoed as canvas for painting would be, Galuszka worked with Golden technical staff  "to establish optimum adhesion of paint to digital printed canvas. Peter Harris and I, plus their technicians in New York have worked together to test the adhesion of different barrier media and paint films using my paintings. Obviously I'm interested in maximizing the permanence of the work, given that the work itself is technically experimental on many levels."

New possibilities keep emerging. "Each of the ten paintings is technically unique, and I'm working on the third generation next, which will involve oil paints using Maroger medium," the artist adds with a techie's delight, "which duplicates the  formula Rubens used."

"What's emerging is an obvious series with a family resemblance," he believes."Each one involves a sky with active weather, a lake, and mountains, and some sign of human habitation. I'm also doing figure paintings, following this same process." The new work is consistent with his overall approach—"to see painting as creating new ways of imagining, and not simply articulating a style."

Making sure that the image doesn't feel cramped is a constant issue for visual artist. "In these current experiments I have been able to add space to the existing image," Galuszka says with obvious pleasure. "The ratio of form to space has always been an issue for me. And so with these new works I've finally conquered a problem I've been dealing with for 40 years of painting.

Painting is a daily practice for Frank Galuszka. "I've always painted—since I was ten. I paint every day and there's always something new, every day. That's pretty amazing and pretty surprising. Even when things go wrong it makes an opening for something new. If I couldn't paint," he confesses, " I'd write fiction or make silent movies, because silent movies are closer to painting than sound films."