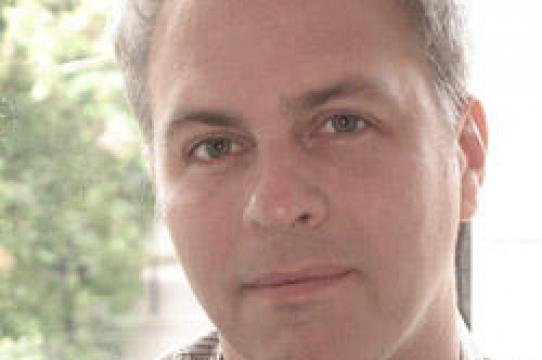 Professor of History of Art and Visual Culture, T.J. Demos is sitting in his office surrounded by boxes that have yet to be unpacked. He’s just arrived on campus after having taught for several years in the Department of Art History at University College London (UCL), one of the world’s leading universities. “Santa Cruz is absolutely a spectacular environment,” he says. “After ten years of being in London, it’s really amazing to be here. It’s such an incredible landscape.”

Part of what drew Demos to UC Santa Cruz is the interdisciplinary culture. “At UCL, the departments were quite structured and segregated so there was very little interaction with colleagues in other departments. London was incredible and interdisciplinary as a place, but institutionally, it was quite limited. There are a lot of different forums at UC Santa Cruz where you can have that kind of cross-interaction, such as Critical Sustainabilities, the Science and Justice Research Center, and the Center for Cultural Studies Colloquium Series. And I’m very excited about that.”

Originally from Chicago, Demos studied music at DePaul University as well as studio art and art history at the Art Institute of Chicago. After graduating from DePaul, he continued on to earn his M.A. at Oberlin College and then attended Columbia University for his Ph.D.

“I’ve always felt that artistic practice has the potential to take on political relevance, but often it doesn’t,” he says. “And so, for me, that’s always been part of a struggle, or even conflict in my work—how to bring those areas together so that art can be socially and politically relevant.” While at UCL, Demos was investigating the ways in which artists operate in the emerging co-existence of political sovereignty and statelessness, and the relationship of contemporary art to the experience of social dislocation and political crisis under the terms of contemporary globalization.

“I found it very exciting in the early ‘90s when I was a grad student and exploring these areas,” he says. “It was a time when artistic practice was becoming very politicized in relation to multiculturalism and identity politics, and the critical potential of art was being stressed. It was a time where you could imagine small-scale revolutions taking place in terms of how we think about the world.”

Demos’ most recent work in progress, Decolonizing Nature: Contemporary Art and the Politics of Ecology focuses on contemporary art’s relation to the environmental crisis. It follows up on other of his books covering the topics of migration and globalization, including The Migrant Image: The Art and Politics of Documentary during Global Crisis and Return to the Postcolony: Spectres of Colonialism in Contemporary Art. He’s also curated exhibitions in England and New York, including Uneven Geographies: Art and Globalization, at Nottingham Contemporary (with Alex Farqharson), in 2010 and Zones of Conflict, at Pratt Manhattan Gallery in New York in 2008.

His prolific body of work has been highly praised and reviewed. Author Alexander Alberro (Conceptual Art and the Politics of Publicity) said that Return to the Postcolony was one of the most ambitious, intelligent, and readable texts on contemporary art related to the African context that he had read. The Migrant Image won the College Art Association’s prestigious 2014 Frank Jewett Mather Award for Art Criticism.

“I became very interested in globalization and ways of thinking about neoliberal capitalism after Cold War politics had come to an end with the fall of the Soviet Union,” explains Demos. “And migration is one way to examine that context because one element of globalization is the supposed collapse of borders. But it turns out to be that the collapse of borders is mainly in relationship to money and commodities, but not so much in terms of people. That contradiction has been central to contemporary art.”

What has also informed Demos’ work in this area is his own sense of not truly feeling at home in the U.S. because of what he felt were extreme political manifestations. He thus looked to art history as a way of exploring conditions of politics and migration, and to look beyond the borders of the U.S. and further into Europe, North Africa, and Latin America. “Since I was living the life of migrant worker myself in London, I was also experiencing the militarization of borders and the politics of securitization whenever I’d travel. A lot of artists were also taking on these subjects in their work and exploring them in a variety of critical ways.”

“Another way of understanding globalization is through the environment and the effect that capitalism has on the Earth’s systems,” says Demos. “Decolonizing Nature: Contemporary Art and the Politics of Ecology explores these conditions by looking at artistic models, such as film and photography, installation and creative social experiments, that touch on climate change and environmental destruction, as well as activist politics, social movements, and climate justice. The book addresses issues that are among the most important things to be confronting today.”

As Demos prepares for his classes at UC Santa Cruz, he looks forward to developing his teaching around art, activism, globalization, and the politics of ecology. He’ll be covering artistic practice in the era of the 1960s (and post ‘60s) in various geographical areas, including Europe, the Middle East, Sub Sahara Africa, and Latin America. Unfolding from his research, his courses will explore these subjects in relation to geopolitical crises, the politics of migration, the spread of neoliberal capitalism, and how artists, cultural practitioners, and filmmakers are positioning themselves in relation to those developments.

In addition, he’s establishing the Center for Creative Ecologies as a place to consider the intersection of culture and environment. “The aim is to develop useful research tools to examine how cultural practitioners—filmmakers, new media strategists, photojournalists, architects, writers, activists, and interdisciplinary theorists—critically address and creatively negotiate environmental concerns,” he says.

“Embedded in the Department of History of Art and Visual Culture, the Center will develop and strengthen its PhD program in Visual Culture. It aims to be an inclusive space of dialogue welcoming diverse participants to consider the ecological conflicts and creative sustainable alternatives that impact us all.”

While away from his office, Demos enjoys time with his family, as they settle into their new life in Santa Cruz and investigate ways to live sustainably, including growing their own food and conserving water, and acting locally/thinking globally within their immediate environment. He’s also concerned about critical issues affecting our society, particularly divestment from fossil fuels, police militarization, and fracking in California.

Demos really appreciates UC Santa Cruz’s connection to the environment, not only in terms of the natural sciences, but also in relation to the cultural ways of approaching environmentalism. “I look forward to contributing to those areas and participating in discussions, both on and off campus,” he says.