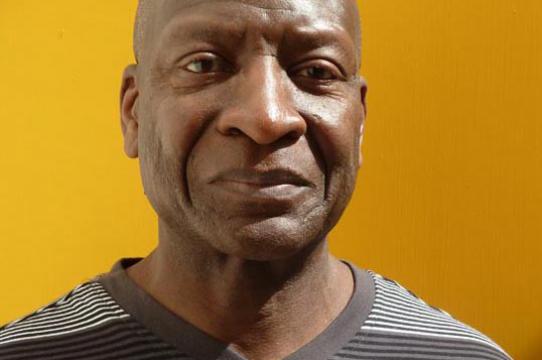 Jazz has been in Karlton Hester's blood since he took up the piano at the age of four. As a lifelong composer and improvisationalist, Hester is currently jamming with colleagues in far-flung disciplines. Even while engaged in jazz composition and classes in African music, Hester is also closely involved in a collaborative alliance with astrophysicist Greg Laughlin and dancer Ted Warburton. The three UCSC professors, along with DANM lecturers Drew Detweiler and Lyes Belhocine have been busy visualizing and reframing a "solution" to the Pythagorean three-body problem as a space-time exploration in music, dance and interactive technology.

The mathematically-tantalizing question centers around intriguing paradoxes involved in non-linear systems, those which do not express their structures through predictable, causal connections and responses. Thinking together about how events can be portrayed in a non-chronological way, the collaborators built upon their strengths. The result was Three Bodies, commissioned and performed last year at the ZeroOne showcase in Silicon Valley. For this performance project the colllaborators asked the question, how can dance, jazz and new digital technology help us understand non-linear dynamics—such as fractals and chaos theory—in a new and lively way?

Hester knew that non-linearity is ubiquitous in world sonic culture, for example in jazz improvisation. So he quickly got involved both composing some music that would underscore the planned performance, and also bringing in musicians who would improvise "on top" of the set composition. Three Bodies is currently being expanded into the centerpiece of an upcoming festival/symposium to enhance and reinforce the growing arts and technology alliance on the UCSC campus. "Greg Laughlin, Ted Warburton, Drew Detweiler and I are currently preparing another Three Bodies collaboration, involving two new additional projects," Hester says. These include "solutions" to the "Butterfly Effect" and "Periodic" problems, along with the "Pythagorean" in concert in May.

"Greg really started it," Hester recalls. "He wanted to translate a particular Pythagorean ratio of 3, 4, 5, into dance and music. This would allow students to grasp mathematical issues at a different level, in a new way." he explains. "We wanted to visualize how bodies with those proportions behave." What evolved was what Hester describes as "an elegant solution to the three bodies problem." The initial performance used three dancers wearing LED headgear tracking their movements—elegant elipses and spirals—onto a screen in the background. The result is multi-layered, three-dimensional movement and variation.

To the existing animation of the equations and their variations, Hester and Warburton added human gestures. "I started with proportion reduced to musical motifs,and composed corresponding music," Hester explains.  Layered over the composed music, “there is improvised music. Three musicians take part— each one following a particular dancer.”

The collaboration was timely. "I had just finished a book on spontaneous composition," Hester notes, acknowledging that improvisation has been an ongoing theme in his work. “This project was an opportunity to work through my interests with an expert in physics” he explains. “Music, math and architecture are the ongoing processes of my life.” Hester's recent book, Exploratory Musicism: Ideas for Spontaneous Composition examines musical composition and the characteristics it shares with science, mathematics and the natural world. The National Science Foundation was very interested in this project, Hester recalls, when he and a contingent of researchers from the Arts at UCSC visited them last fall to discuss arts/science collaborations on campus. “It's really promising, both in terms of traditional research and new pedagogy.” The collaborators have applied for a grant for an expanded version of Three Bodies, in time for a proposed Porter College festival of the arts, science and technology in conjunction with the 10th anniversary of the Digital Arts New Media MFA program next year.

“The music, dance, astrophysics—I have many dishes—one big plate.” Music was there from the start. Even as a pre-med undergraduate in Texas, "music was always my passion," he admits. Hester did a lot of free-lancing after coming to California in the 70s. “I knew the hardship of being a musician." Rejecting a scholarship to Stanford, Hester headed for San Francisco. “A lot of people I admired taught at SF State." After PhD work in New York Hester spent time at Cornell on a Mellon Scholarship and later as the Hurbert Gussman Director of Jazz Studies, before joining the Music Department at UCSC 13 years ago.

"After my current Three Bodies project I look forward to collaborating on a book that explores the connections among music, spirituality, metaphysics and science. And yes, I have to play music.  I have a trio and I have to play—that's the only way you can stay fresh.”