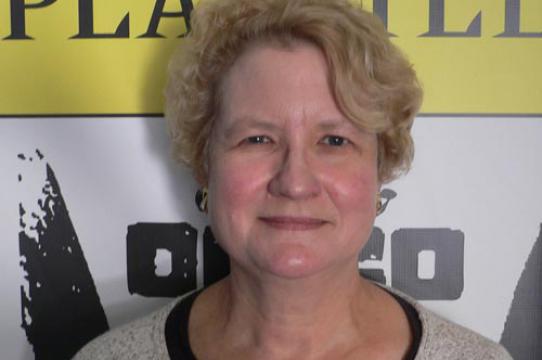 Growing up in Dearborn, Michigan, Professor of Theater Arts Kate Edmunds thrived in her Art Department education at Wayne State University. "I finally did learn how to draw," she chuckled in a recent conversation, and "even though I ultimately declined studio art as a career, I've always gotten enormous comfort from great art."  Designing sets and costumes suited her. "I loved applying all my artistic skills to theater design. I never wanted to be a professional performer," she admits rolling her eyes.

When it came time to apply to graduate school, Edmunds cut through the sea of application forms she'd received by applying only to a single program—the Yale School of Drama. The strategy worked. And so Yale it was. "I used graduate school as a training ground to express myself well visually and it was a tremendous education." She pauses. "But I was glad to get out of there."

The classic bohemian trajectory ensued. Edmunds filled a truck with her belongings, went to New York City, and rented a studio apartment in what was then called "lower Harlem." In her nine years in Manhattan Edmunds established career credentials. "I started by assisting an established designer. Unless you have a trust fund or make that one very lucky connection, that's how you begin and you start to do your own work on the side."

She did enough off off Broadway work to start attracting notice. "A few mentions in the Village Voice—whether you know it or not everybody's watching you." A connection with the Manhattan Theater Club helped launch her into her first big gig. "It was design for Brian Friel's Translations—it got good mentions, and these things build on each other," she notes. There was even a Broadway project with Charles Strouse of Annie fame that enjoyed a brief theatrical run.  "I still have good memories of that experience," says the designer who loves working on musicals. "How can there be any more excitement in the air? Orchestras rehearsing, dancers stretching in the hallways!"

Designing, and even re-designing for theater never fails to engage Edmunds' skills. "I once designed South Pacific in the round for Arena Stage," she grins. "There are so many different ways to arrange the scenes and the songs we all know. Musicals are meant to entertain. You need to give them what they're paying top dollar for. After all, audiences can't leave the theater humming the scenery."

"All I do as a designer is solve problems," Edmunds contends.  "Hopefully in ways that support the actors, the director, and the play. Even if I've designed it before, each time I do a play it's different."

Edmunds disavows applying any formula signature style. "Oh frequent terms such as 'elegance,' and 'minimalism' have popped up around my resumé. And I do get excited when we can boil things down. But I'm also delighted to be inconsistent," she blithely confesses. "Sometimes a baroque extravaganza is the best thing. Every script has its rhythm—you have to find it. And sometimes the most over-the-top response is indeed the correct one."

"I love what I do because it always changes. I have directions—marks on paper, or a score—actor meets script, tells a story. And I have to listen and be a fearless transmuter into the visual." Edmunds contends that theater is a funnel for all of the arts. "The visuals include sets, costumes, lights, which involves collaboration, and collaboration—however you want to view the term—is built into the DNA of a good designer."

Designing sets and teaching set design has kept Edmunds busy since she and her husband moved to the Bay Area 19 years ago. "This work suits me down to the ground," she grins. "In my work I get to work with folks like Tony Kushner, with Shakespeare, with exciting little-known playrights, and wonderful super-smart students. And somebody actually pays me for it!"

Even in a notoriously tough profession, Edmunds acknowledges that she's been very blessed. "The first show I did at Berkeley Rep was Twelfth Night." It came about after she and two theater colleagues came out West for a "girls weekend" and she fell in love with the Bay Area. Driving out from Manhattan, she and her husband got a place in the Castro "where everything I needed was right there." And for the past six years Edmunds and spouse have made Santa Cruz their home.

Edmunds' credits are long and illustrious. The overworked term, "award-winning," well and truly applies to Edmunds broad-ranging creative work on plays including Liaisons Dangereuses, The Rose Tattoo, Private Lives, and Twelfth Night. Over the past two decades she has worked as Associate Artist for the Berkeley Repertory Theater, American Conservatory Theater (A.C.T.), the Magic Theater, and "I continued to do the regionals in Baltimore, New York, Seattle, Chicago, Los Angeles," as well as teaching at UC Berkeley. Working with prolific Bay Area actor Danny Scheie led to her current role with the UCSC Theater Arts Department, where she's been for the past dozen years, prompting a move to Santa Cruz six years ago. Those who recall the A Year with Frog and Toad, as well as a host of past Theater Arts/SSC winter holiday shows, have relished the stylish stamp of her Kate Edmunds' scenic eye.

"I've always been lucky to be in the right place at the right time."