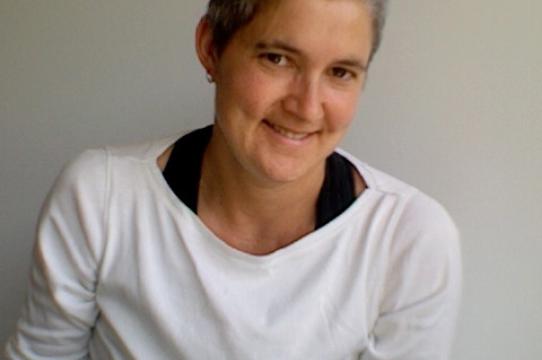 A theorist and writer who explores the social implications of emerging technologies, Kate O'Riordan joined the Art Department faculty this fall. She comes to Santa Cruz from the Department of Media and Film at the University of Sussex in the UK,where she specialized in digital media technologies. O'Riordan's current research tracks the very early stages of technologies which aggregate into online groups, resources, and conversations.

"I was always interested in computing. My dad was fascinated with new technologies and I was always quite nerdy", she confesses. "I really got into it at the beginning of computing in mass culture. There were a lot of issues around the disconnect between computing and ordinary people. Early computers were slow and clunky—early web sites didn't look very good." And O'Riordan has been probing digital use practices and information design ever since her graduate school days.

Women intersecting with computer science became a key area of interest for O'Riordan. She tracked a group of women as they began getting engaged with computers at home, and began creating homepages, which were rapidly becoming "a really big domain of public consumption." She began exploring how women were using computers "in domestic life as well as creating professional sites. Homepages became resumés and portfolios." In the beginning, she recalls, "there weren't many people viewing sites. Who was looking at your site was a complex unknown." O'Riordan has followed the women she had interviewed while doing her PhD thesis, which dealt with women's use of the internet. "And revisiting them now is part of a book I have in development."

Her investigations of women as producers of texts will also become available as an online archive. O'Riordan's own practice involves writing, rather than studio artwork. "I research and write about theoretical frameworks involving emerging technology and popular acceptance, design innovation— Media and arts together— and what does that mean to everyday life and everyday people."

"Most recently I'm working on an EU funded project that looks at social aspects of InVitro Meat, Smart Grids and Biosensors— all emerging technologies at different stages of emergence.  I work on public understanding and engagement with emerging technologies and I use media (including art) as the index of this. "InVitro meats, for example is a group that grows tissue cultures, actually cultured meat," she grins.  "It will launch soon, and there's an interesting mixed bag of people on board - most are scientists, but also social and animal rights artists involved." She cites an art group using biological fabrication in their art practice. "They generate steaks and then eat them as the performance. And this," she grins broadly, "generates a discussion of ethical issues."

O'Riordan's emerging technologies include Biosensors, "the technology developed will measure bio signs, such as blood pressure, heat rate, physical location. Then the information can be passed back to consumer or physician to track diabetes, or heart monitoring." She points out that such technology was used in the Olympics , "to help optimize performance, and empower individuals." She's also aware that such technologies raise questions of surveillance, and of who has access to this information.  "Huge amounts of data that someone else can use. What are the implications of these tracking technologies?  There are questions of ethics for artists to consider." O'Riordan's results will appear in peer reviewed articles and books, in workshops, in reports to the European Commission (who fund the work on In vitro meat,biosensors and smart grids,) and through digital media blogs and exhibit sites.

"I'm looking forward to developing syllabus areas in the debates of arts and sciences in digital culture," O'Riordan explains. She is also interested in developing curricula on new media publics for the new graduate program.  "Also in making links between other groups on campus and arts. For example I led a new undergraduate artist in residency at the Center for Science and Justice (in sociology) in collaboration with the OpenLab Network and SPARC. I also chaired the Mary Flanagan panel on Critical Play, and am looking forward to organizing a visit from Professor Sally-Jane Norman (professor of performance technologies and director of Attenborough Centre for Contemporary Arts at the University of Sussex to develop relationships between University of Sussex and the Arts Division here at UCSC."

At this early stage, Kate O'Riordan's role in her new appointment can be considered an emerging technology unto itself.