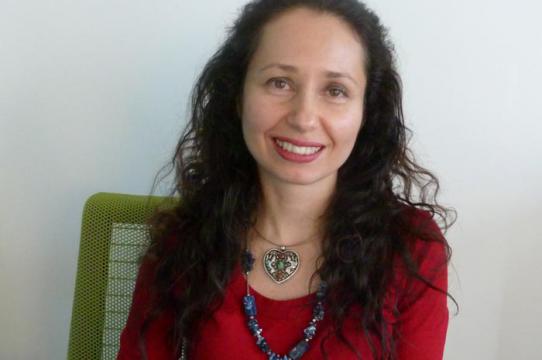 Rare is the researcher who can boast of deep backgrounds in both Byzantine and Western art history. Maria Evangelatou is that individual, and more. A native of Greece, Evangelatou has been able to decode linguistic as well as iconographic nuances in her special areas of interest, including 9th-century Eastern Orthodox psalters. And her education in England has armed her with skills to address her latest passion—the renowned Renaissance painter El Greco.

A faculty member in the History of Art & Visual Culture department, Evangelatou is working to transform her PhD thesis into a book. "It is currently being sent out to editorial houses," she explains. The research for her thesis led Evangelatou to Moscow, Paris and Thessalonika, on the trail of rare 9th-century psalters containing polemical miniatures of biblical and historical themes.

The psalters Evangelatou researched were made in Constantinople, the ancient capital of Byzantium, for high-ranking churchmen. The pattern of applying bible lessons to contemporary events was widespread in these texts and their meticulously painted miniatures. "Miracles, for example, were seen as sites of tension and conflicts, as well as occasions where someone is healed of an illness. The sick are not simply cured, they are also being saved," she points out. The miracles referred to spiritual as well as physical healing. "It was a pattern of thought very basic to Byzantine culture."

Seeing the originals "in person" is crucial to her research, a variation on detective work.. "The book itself is a context that helps me understand the images. You can see how the miniatures relate to each other, and to the page itself. This is important. And then there's the issue of color and detail," she adds "which is really only seen when you have the original in front of you." In the case of the psalter housed in the Mt. Athos monastery, seeing the original was a bit dicey. Women are famously not allowed on the mountain. "However the psalter traveled to an exhibition to Thessalonika," she adds, with a mock sign of relief, "where I was able to see it first hand." Inscriptions and translations needed to be examined and cross-checked. That Evangelatou speaks, reads and writes Greek, was crucial in this work.

The quest to understand the choices made by psalter designers also led the art historian to investigate other biblical manuscripts and miniatures. "I had to read everything in surviviing iconophile literature to see their arguments, and their patterns of expression and thought. This helped me gain a feeling for the relationship between the images and iconophile mentality," she observes with satisfaction. "Many times the practice was to portray contemporary historical issues by way of well-known bible stories," she notes. "For example when David decapitates Goliath, the allusion is really to the victory of the Iconophiles over the Iconoclasts." The Iconoclasts were those members of the 8th- and 9th-century Eastern Church who were against the use of icons for devotional purposes. "In Byzantium people were taught to read the bible in this way— as allegories for current concerns, with thinly-veiled political messages embedded within the textual and visual references to biblical events. The psalters were very polemical," Evangelatou explains," and used the power of the bible to emphasize their iconophile message."

Seeing the books themselves was crucial "because the sense of the manuscript as an object is important—even the size and the weight. You don't realize how people felt about them until you hold them in your hands." Evangelatou admits that the process was exciting "and very often it was awe-inspiring to hold them—of course while wearing gloves," she quickly adds. "People created these so many centuries ago— and you're connecting with that history. I find it very moving."

Since her thesis was written for a limited, specialized audience, Evangelatou hopes that by turning it into a book manuscript she will be able to address a larger, general public, "people interested in images, and in Byzantine culture. It's a tricky undertaking," she admits "because you have to balance between general and specialized readers. If it's too technical, non-specialists won't pay attention," she contends. While waiting to hear about her thesis manuscript, she has begun to develop a new "very exciting" project - on Doménikos Theotokópoulos, better known in Western art circles as El Greco.

Evangelatou has written about the symbolism of space in a number of paintings from El Greco's career. "My intention was to trace the interaction of Byzantine- and Western-inspired elements, which enabled El Greco to infuse his work with subtle intellectual and theological references." Evangelatou is convinced that a new reading is required to show that El Greco's famously idiosyncratic style is the outcome of the two traditions he had mastered. "He was originally educated as a Byzantine icon painter, up until he was about 25 years old and went to Italy." Ten years later he moved to Spain for the rest of his life, producing work that was "totally unique. I am interested in the interaction of cultures within one person," she says. "I wanted to see especially how his Byzantine and Greek Orthodox background influenced his style, but also his iconography, for example the role of Mary, the role of the Eucharist. Some of the things he does are rare in Western contexts. He expresses his own religiosity."

Evangelatou believes that "most modern scholars think he's just an intellectual—they don't look at him as also a profoundly devout person. El Greco references his agency and personal intentions in his paintings through his signature, always in Greek. He is proud of these images," she continues, "as tools for the viewers' spiritual ascent and also his personal connection to the saints for his own salvation. Through his signature," she continues, "he embeds himself into the paintings and interacts both with the holy figures and their devotees."

Evangelatou admits that she occupies a unique vantage point in this area of art historical scholarship. "I have a background in Byzantine art and culture, and I am trained in Western art." She smiles. "And I read Greek." The latest strand of her inquiry has already generated two articles on artistic aspiration and religious inspiration in El Greco. "I have in mind to turn this project eventually into a book. My Byzantine background helped me with El Greco, but now I am starting to see Byzantium itself in a new light." Evangelatou laughs at the profusion of new projects her research implies. "I am seeing evidence of the Byzantine artists' pride in their work, as creators of religious visions."