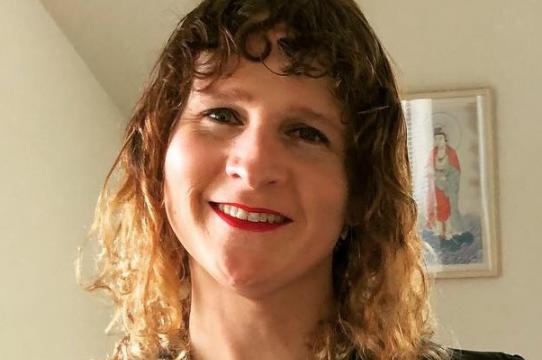 For as long as she can remember, Assistant Professor of Art & Design: Games and Playable Media, micha cárdenas has been interested in computers and fantasy. Her first experience with technology involved coveting her brother’s Commodore 64 computer. From there she segued to an Atari, and then the Nintendo that her astute mother gave for Christmas, playing with it constantly.

“From a very early age, I loved books,” says cárdenas. “My family didn’t have a lot of money, so we had some rough years. But as a child, I started going to the library and finding an escape in fantasy novels, science fiction stories…and the computer lab at my elementary school.”

Now, her love of fantasy novels and computing have led her along a fascinating path where she has enjoyed critical success – presenting her multifaceted work around the world – as an accomplished artist and theorist who works with the algorithms and poetics of trans people of color in the digital media environment.

cárdenas has been a prolific artist, including exhibiting her collaborative artworks in the Museum of Modern Art in New York, the ZKM in Karlrushe, the Art Gallery of Ontario in Toronto, Los Angeles Contemporary Exhibitions, the Centro Cultural del Bosque in Mexico City, the Centro Cultural de Tijuana, the Zero1 Biennial, and the California Biennial.

In addition to developing games, she writes poetry which has appeared in several anthologies. She also has published works related to the theoretical issues raised in her performances. Books co-authored by her includeTrans Desire/Affective Cyborgsand The Transreal: Political Aesthetics of Crossing Realities.

“Being an interdisciplinary artist and scholar does make it seem like I have many projects going on,” says cárdenas. “But I see them as all related in a trajectory of experimentation and reflection.”

Her path towards art turned into a circuitous one. When it came time to attend college, she decided on majoring in film only to have her father’s ardent disapproval. “I ended up living with my father, who was very strict. He had come to the U.S. from Columbia to find prosperity for his family, and he thought that the way for me to do that for my family was to study science.”

So cárdenas honored his wishes, changing her major many times in the process, before deciding to study computer science at Florida International University. It wasn’t until grad school, where she earned her MA at European Graduate School, MFA at UC San Diego, and a PhD at the University of Southern California (USC), that she finally fulfilled her dream of studying art, merging her artistic desire with her love of technology.

cárdenas has never been afraid to tackle complicated issues head on. Her latest game, Sin Sol/No Sun involves stories around a major climate event, such as a wild fire, and the effects of the intense smoke, with the main characters Aura, a trans Latina AI, and her dog leading the player through an augmented reality experience. “The main message of the game is that we have to care for all people and all species, and perhaps even care about beings we might consider virtual, if we’re all going to survive climate change.” 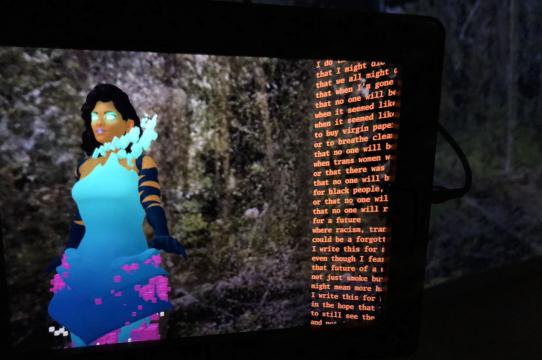 Another focus of her abundant creativity has been on trans and queer culture. “A significant part of my artwork and writing has been concerned with how to promote safety for trans and queer people of color, because they are consistently the group most targeted for violence among LGBTQ people in the U.S.” she says.

What initially attracted cárdenas to UC Santa Cruz were the scholars here, including Gloria Anzaldúa, Sandy Stone, Angela Davis, Donna Haraway, and Chela Sandoval, who inspired her work throughout her career. She also was drawn to the work being done in the Art and Design: Games and Playable Media (AGPM) program. “The quality of a program that the director Robin Hunicke has created here deeply impressed me, and I’m honored to be part of it,” she says. “Since I arrived, I have met even more of the amazing community of people using media for social justice at UCSC.”

cárdenas is inspired by the art and activism approach that the AGPM program has to creating games, challenging students to not make typical shooter situations, but instead to push their boundaries and develop experiences that go beyond the norm and address sensitive and important issues.

One of cárdenas’s particularly intriguing projects was a tool she developed with the Electronic Disurbance Theater 2.0 while she was studying and then teaching at UC San Diego. Called the Transborder Immigrant Tool, it was a GPS device designed to assist immigrants crossing the U.S./Mexico border find sustenance, including water.

“The project worked by recycling cheap cell phones and writing custom software for the phones that didn’t rely on having a cell signal,” explains cárdenas. “The experience of creating that and exhibiting it led me to think about how I could use my art practice to work for safety for communities I feel a part of, like trans and queer communities.”

cárdenas also created a line of clothing/wearable electronics that contained mesh networked wireless transmitters that when activated, could send out emergency messages to the wearer’s network. Designed to be used as a means of protection to reduce violence against women, LGBTQ people, people of color and other marginalized groups, it was specifically designed to work without relying on cell phone transmissions. This innovative project, called Local Autonomy Networks (Autonets), was exhibited and used by cárdenas in workshops and performances in the Canada, Brazil, Germany, and the U.S. 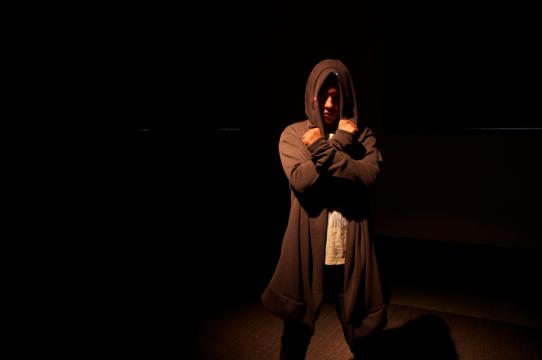 As she looks forward to being a vital part of Digital Arts and New Media, as well as Critical Race and Ethnic Studies, cárdenas continues with her pioneering work.

“I am inspired by thinkers, both writers and artists who come up with ideas so rich and compelling and relevant that they change the way people think for decades, or centuriesto come,” she says. “The scholars at UCSC who inspired me have done that. They created new fields of study, new ways to think about who we are and energized political movements for gender and radical justice. I strive to do that in my own writing and art.”