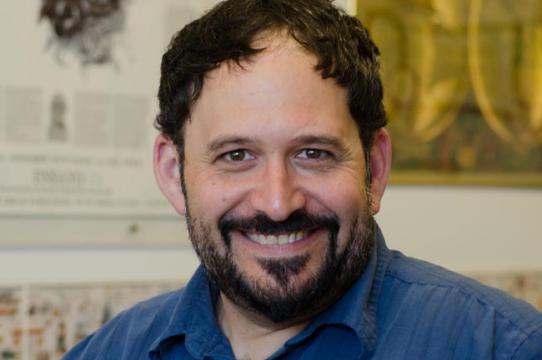 Even before Theater Arts professor Michael Chemers arrived on campus this summer there was huge buzz about his new course entitled Monsters. Given the colorful subject, as well as the title of his most recent book—Staging Stigma: A Critical History of the American Freak Show—it seems clear that Chemers has the unusual on his research radar.

Chemers readily admits that he felt like a freak as he was growing up. "Sure I did," he says, transforming his face into a cartoon monster, eyebrows suddenly flaring up and eyes expanding to ghoulish proportions. "It was Salt Lake City," he laughs.  "It was not ethnically diverse.  I never really felt welcome," he recalls. "I'd always get beat up on the playground." Chemers credits those childhood events for developing his sense of alienation—"which I think all artists need." Teaching became another way he coped. "I'm devoted to being a teacher," he grins.

"When I was at Indiana University studying playwriting, I wanted to find ways to discuss my own authentic being. The work on freaks was that way." The world of the freak is very different from what we think, Chemers contends. "Being a freak is a job, it's an acting game, performing abnormality. It can mean many more things than impairment. It's a fraught site." Early in his career, Chemers wrote a play "about professional circus performers in an era where sensitivity to disabilities had marginalized their former roles as freak."

He clearly relished this experience. "I got to meet people who performed their abnormality—they were very welcoming." And they became the basis of his PhD work. Many of the key faculty in History of Consciousness here at UCSC were important to Chemers' dissertation research—"Angela Davis, Jim Clifford, and Hayden White, who has done a lot about freaks."

The doctoral work led to Chemers' increased interest in disability studies. "It refined my work to the point where those disability studies and theater studies began to overlap. My work is very multi-disciplinary." He finds it effortless to merge his theoretical studies and theater practice. " It's like inhaling and exhaling," he jokes. "Inhaling is scholarship. Exhaling is creative work."

Chemers playfully describes his Winter quarter course on Monsters. "It will begin with a grounding in ancient theater, then we'll have a lot about disability and freaks in the theatrical literature, and then a lot of sex, drugs and rock'n'roll." He laughs at his own audacity.

Dramaturgy is a field he's passionately involved with, having set up a program in Dramaturgy at Carnegie Mellon Institute in Pittsburgh, and authored Ghost Light: An Introductory Handbook for Dramaturgy in 2010. "Nobody knows what it is. The more we try to define our field, the less clear it becomes." And so he illustrates.

"Three positions involved in doing a play all require strong analytic skills," Chemers notes. "The director, the playwright and the dramaturg. They all have to understand the dramatic action and they all have to develop a vision.  But they all have different jobs." The director turns those visions into a coherent whole. The playwright supplies the script. And the dramaturg's job is to question the process. "The right answer to that question," he says with an impish smile, "is the one that provides the most interesting effect on the stage."

"Most people think of dramaturgy as the vegetables on the plate.  It's not," he insists with exaggerated bombast. "It's the plate!"

Chemers proudly reveals that the werewolf is his favorite monster. "I always ask my students what monster scares you most. And whatever that is, that's the one you most identify with.  And werewolves are actual beasts," he contends.  In fact he's giving a paper on werewolves and about the legal existence of werewolves in November.

"The werewolf is a liminal creature. Half of it inhabits the world we know. The other half we don't know. It's about marginalization and hatred." There have been great monster movies, Chemers freely admits. He considers Jaws one of the best. But plays, he believes, have even greater evocative power. "In a movie you can show a monster. In a play you indicate a monster."

What monstrous activity does he pursue for sheer fun? " I juggle fire," he grins. And he's completely serious.